The VB.Classic environment allowed only one way to debug a program. You loaded the source code into the IDE and the VB interpreter executed the p-code (packed code, an intermediate format between source and native code). This was a simple concept and therefore easy to understand, even for a VB neophyte. From version 5.0 onward, you could also compile your source code into processor-native code, but then you were on your own if you wanted to debug the result.

The .NET environment gives you no less than three ways of debugging your application, and each of these ways has some variations. As happens so often in the .NET world, you now have more choices, more flexibility, and more complexity.

The first method is similar to the VB.Classic way of doing things, although it has its own quirks . The other two methods will be unfamiliar to many VB.Classic developers, but they're useful because of the extra debugging facilities that they make possible. In fact, all three methods work the same way under the hood in that they all involve a debugger being attached to the process that you want to debug. Visual Studio does the process attachment automatically with the first method, you do the process attachment manually with the second method, and the final method requires you to tell the CLR which debugger you want to attach to a crashed process. The next three sections discuss how each of these three methods works when using the Visual Studio debugger.

This is relatively familiar territory to a VB.Classic developer. You load the solution that contains your application into Visual Studio, set your breakpoints, and press F5. Visual Studio automatically attaches its debugger to your application's processes, and as long as your debugging doesn't step outside of the projects that make up your Visual Studio solution, you can step through your code and debug in comfort .

An important point is that you can combine the debugging of your current Visual Studio solution with the "attach to process" method of debugging explained in the next section. Assuming that a project within your Visual Studio solution calls into another process to which you've attached the debugger, you can step seamlessly back and forth between your code in your solution and the code in the process that you've attached to manually.

You can also use the IDE to debug an application that was built outside of Visual Studio or one for which you have no source code. If you don't have a solution open , or you don't want to add the application to an existing solution, select File ’ Open ’ File and find and select the .exe file. To add the application to an existing solution, choose File ’ Add Project ’ Existing Project and then select the .exe file. Once the .exe file is loaded and shown in the Solution Explorer window, right-click the imported.exe file and select Debug ’ Step into new instance, and Visual Studio attempts to find any associated source and debug symbol files so that you can start debugging. Alternatively, you can use the menu option File ’ Open ’ File to select the source file manually and import it into your solution.

In this situation, if both the source code and debug symbol files are available, you can debug using the source code. Otherwise, you can only debug by observing and setting breakpoints in the assembly code within the Disassembly window.

There are some limitations to debugging applications within the IDE, such as effective debugging of a Windows service. When faced with these limitations, you can opt to debug by attaching manually to a process that's already running, as described in the next section.

You'll often encounter situations where you want to debug programs that you can't, or don't wish to, load into the IDE. Some examples of these situations include the following:

Attaching to a Process 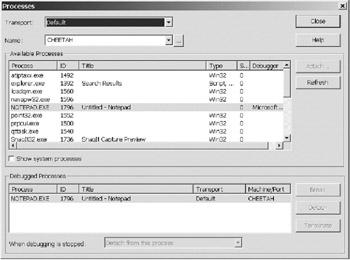 The Available Processes subwindow shows the processes executing on the machine specified in the Name combo box. If you choose the option to show the system processes, you can view processes running under the system account, such as Windows services. The Refresh button is useful because this window is not updated in real time and therefore may not reflect the true state of processes that have started and stopped while the window was showing.

The Transport combo box controls the transport protocol used for remote debugging. By default, the Visual Studio debugger uses the Distributed Component Object Model (DCOM) protocol for remote debugging. If DCOM is not available for some reason, and then only if you're debugging native Win32 applications, you can specify the Native-only TCP/IP transport. If you've upgraded to Visual Studio 2003, you have the additional option of using the Native-only Pipe transport protocol, which is more secure than TCP/IP, but slower. You use the Name combo box to specify the machine that you wish to debug remotely. Choosing a valid machine name shows the processes running on that machine. Please see Chapter 15 for more information about these options and about remote debugging.

When you click on a process in the Available Processes subwindow, the debugger enables the Attach button. Clicking this button prompts the debugger to ask you which types of application you wish to debug. A process can be running up to four different types of code, so you can choose which types of debugging you wish to perform. Figure 3-3 shows this dialog window. 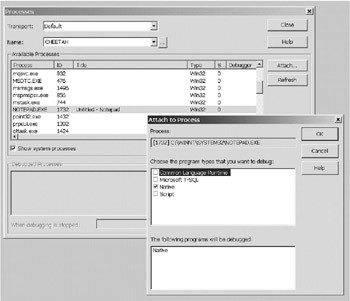 As long as the debugger attaches to a single program type in a process, it's successfully attached to that process. The problem is that you won't be able to debug the other program types running within that process. If you wish to receive a more detailed error message about an attach error, you should detach from the partially attached process and then attempt to attach to the process again, but only using the program type that failed. You should then see a better explanation of what went wrong with attaching to that program type.

If the debugger completely fails to attach, you'll also see an error message ” for example "Access denied " because of a permissions problem. In this case, it isn't uncommon for the process to be shown as attached even though it isn't. Clicking the Refresh button will show you the real status of the process.

Breaking into a Process

You can break into any of the processes being debugged by clicking the Break button on the Processes dialog window. This is the manual equivalent of setting a breakpoint and performing a program action that causes the breakpoint to be triggered. The major difference is that with the Break button you have no control over where the program will be halted.

By default, the Break button breaks into all of the processes being debugged simultaneously. To change this behavior, go to Tools ’ Options ’ Debugging and select the option marked "In break mode, only stop execution of the current process". This is useful when you want to investigate a single process, but keep the other processes in your application running normally.

Detaching from a Process

The automatic option is the easiest , but it has a major annoyance. By default, Visual Studio always terminates every process from which it's detaching. This may be okay if you're only running processes from within Visual Studio, but it's nasty if you're debugging a production process or any other process that you want to keep running. To change this behavior, you have to go to the Processes window, choose the processes that you want to keep running, and for each one select the Detach from Process option rather than the default Terminate process option. You need to do this for every process and for every debug session, which rapidly turns into a major pain.

You can stop debugging a process manually by using the Detach button in the Processes window. If you're using Windows XP, this button is always enabled, and using it stops debugging without any harm to the process from which you're detaching. If, however, you're using Windows 2000 or Windows NT, and you're debugging a native Win32 process (one not created using .NET technology), the Detach button may not be enabled and you then have to use the Terminate button instead. This has the unfortunate property of doing exactly what its name implies: It kills the process that you've just been debugging. This isn't always what you want to happen. For obvious reasons, you should be especially careful about terminating a production process, a system process, or any process that other users are likely to be depending on.

This process termination happens because Win32 processes were not really designed to cohabit with a debugger; if you've ever used the Visual C++ debugger, you'll know that it never gave you the choice of detaching from a process without terminating it.

The key to fixing this problem with Win32 processes under Windows 2000 or Windows NT is to find and start the Visual Studio Debugger Proxy Windows service before debugging. This service then sits between the Visual Studio debugger and the native Win32 process being debugged, and allows you to detach from the process without terminating it. The debugger proxy service does have a few restrictions. It won't work on Windows 98 or Windows ME, and also doesn't work when you're debugging COM Interop applications. Finally, you can't use the debugger proxy service when you're debugging under Terminal Server. Whether or not you're using the proxy debugger service, Visual Studio doesn't allow you to detach from a process if you're debugging more than one project type within that process. For instance, if you're debugging a Web service together with a non-Web client of the Web service, the option to detach won't be available. I don't know why this restriction exists.

Just-In-Time (JIT) debugging shouldn't be confused with JIT compiling. It is instead an exotic variant of the process debugging discussed previously. It's designed to attach a debugger at the point that a managed or unmanaged program crashes due to an unhandled error. Without the presence of a JIT debugger, a crashed program simply closes down and vanishes.

For a crash in managed code, and depending on the JIT debugger settings, the CLR can perform one of the following actions:

This gives you some choices about handling a program crash. On a developer's machine, you probably want to use the second or third option. On an end user's machine, a better choice would probably be the first option.

The two registry settings that control this behavior are both under HKEY_LOCAL_ MACHINE, abbreviated as HKLM. The first registry setting controls how the crash is handled. The second registry setting specifies which debugger to launch if one is needed. Both settings and their possible values are shown in Table 3-3.

For a crash in unmanaged code, you have fewer options. The two choices are as follows :

On a developer's machine you can use either option, but on an end user's machine a better choice would probably be the second option.

An alternative way of managing these settings is from within Visual Studio. Here you can set the Visual Studio debugger to handle crashes in managed code, native code, and even script by going to Tools ’ Options ’ Debugging ’ Just-In-Time and setting the appropriate options. If you didn't install the Visual C++ .NET section of Visual Studio, you may not see the native code switch in this dialog window. This is, in my opinion, a bug because you may still want to JIT-debug native code such as VB.Classic even if you're ignoring C++. If you fell into this trap, you should either install Visual C++ .NET or use the registry settings mentioned previously.