Figure 11-5 depicts a fully redundant Internet module. The first component of your Internet module is the use of redundant routers connecting to separate ISPs using Border Gateway Protocol (BGP) for Internet routing. The routers connect to separate switches and use Hot Standby Router Protocol (HSRP) to advertise a virtual router as the gateway. In addition, you should implement the first layer of filtering on these routers. You should implement an IDS/IPS at the switch to interrogate all traffic coming from the Internet to the firewalls. The firewalls are configured with two DMZs on a stick. One DMZ provides access to public services such as SMTP, DNS, FTP, and HTTP. The other DMZ provides content filtering functionality for the firewalls to ensure that no unauthorized or objectionable content is permitted to or from the internal network. Both DMZs follow the redundant design implementing dual switches with an IDS/IPS implemented on the public services DMZ to interrogate all traffic sent to and from the DMZ. Finally, the firewalls connect to the internal network, again implementing an IDS/IPS to interrogate all traffic sent to and from the internal network. 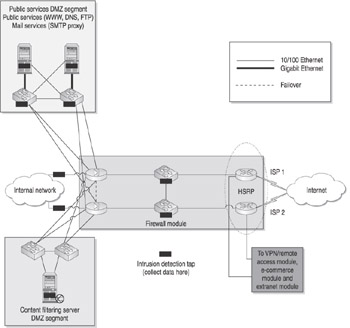 Traffic Flow Through the Internet Module 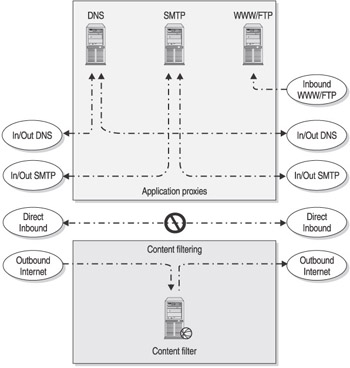 Figure 11-6: Traffic flow between the internal network and the Internet

The IDS/IPS configuration depends largely on where in the module the IDS/IPS is implemented. For the IDS/IPS located at the public edge, you should implement a more broad analysis. This is because at this point any alarms do not represent an actual breech of the network; rather, they merely represent potential attempts.

As you get closer to the internal network, you need your IDS/IPS to take a more focused approach to traffic analysis. For example, on the public services DMZ, you know exactly what traffic is permitted, allowing you to focus the alarms for the network-based IDS/IPS (NIDS/NIPS) on traffic matching those patterns. In addition, you need to implement host-based IDS/IPS (HIDS/HIPS) on the servers in the DMZ to protect against operating system “level tampering.

The IDS/IPS implemented between the firewall and the internal network is where you need to undertake the most stringent analysis. This is because any suspicious traffic that has been able to make it this far is inside your perimeter defenses. Very few attacks should be detected at this point, and every attack detected should be treated with the utmost of importance.

An example of implementing ingress filtering with a Cisco PIX firewall uses the following steps:

Implementing an ACL is a straightforward process. You can run the following commands at the global configuration mode to implement an ACL for basic Internet functionality:

In this example, you are permitting any traffic to access the web server and FTP server on IP address 1.1.1.10, the DNS server at 1.1.1.11, and the SMTP server at 1.1.1.12. If you wanted to log all traffic that matches these entries, you could add the syntax log at the end of the ACL, as shown in the third line. This would cause the connections that match the traffic to be logged via syslog. These four services are the most commonly implemented services that Internet-based hosts need to access and in many cases are the minimum required ingress filters that most companies need.

Part of what probably contributes to the lack of use of egress filtering is a little bit of confusion as to how egress filtering functions in regard to a stateful firewall. For example, if I implement a firewall with ingress filtering as previously described and then implement egress filtering that blocks all traffic from the DMZ segment, many folks believe that will prevent the servers on the DMZ from being able to respond to external requests. However, this is not correct. Remember that the whole point of being a stateful firewall is its ability to remember the state of all conversations so that valid responses can be passed through the firewall accordingly. So the servers would still be able to respond to all external requests; however, they could not originate any packets through the DMZ interface. This is particularly valuable in ensuring that hosts on the DMZ cannot pass traffic back to the Internet in the event that they are compromised.

The following code example illustrates how to implement an egress filter that permits only SMTP and DNS traffic that is sourced from the servers on the DMZ in the previous example. This allows you to use the DNS server in your DMZ as a DNS forwarder for your internal hosts as well as the SMTP server as the SMTP relay for both incoming and outgoing e-mail, while preventing all other traffic that is sourced from the DMZ servers from being passed by the firewall:

No good baseline is available for implementing egress filtering since the traffic that should be permitted to exit the network largely depends on the resources that are located on that network segment. The best approach is to allow the absolute minimum traffic required.