The racing game features many different game screens, which are all managed by the RacingGame class by the gameScreens stack variable. This section describes most game screens used in the game and exactly what they do. Most game screen classes are fairly simple, but others are a little bit more complex and feature a unit test, which can be used to learn more about the class. For example, the Credits screen is fairly simple and just displays a background texture, but the Main Menu is more complex and has all the buttons to get to the other game screens. The Options screen introduces many new controls, which had to be tested, and there is obviously a unit test in this class to help you out with that process.

All game screen classes are derived from the interface IGameScreen (see Figure 14-6), which you probably will remember from the Rocket Commander game in Chapter 8. It is pretty much the same class, but it was made a little bit simpler. You now only have one method left called Render, which takes no parameters and returns a Boolean value. The code is actually the same as you used in the XNA Shooter game. If a game screen Render method call returns true it means you are done with this class and can return to the previous game screen until you run out of game screens and exit the game. Usually game screens return false because the user does not immediately quit them again after joining a game screen.

Because of this simple interface all the game screen classes in the class diagram view look just the same; they all just have a Render method and not much else. Some classes have some private helper methods, but they are mostly very simple. Some of the more complex game screens have unit tests for testing if all elements are aligned correctly and function they way the should. Not even the GameScreen class, which handles the complete game, is that complex. Unlike XNA Shooter or Rocket Commander all the game code is handled and rendered in the landscape and model classes. The game logic is handled in the Player class, which is a little bit more complex, but you already learned all about the underlying physics of the CarPhysics class and the ChaseCamera class in the last chapter.

Take a look at Figure 14-7 for a basic overview of all the game screens used in this version of the racing game. The most complex class is obviously the Mission class, which handles the game play and game logic. It does not contain all the game code, however; some of it is handled in the player classes and the RacingGame main class also handles a bit of the general game content. 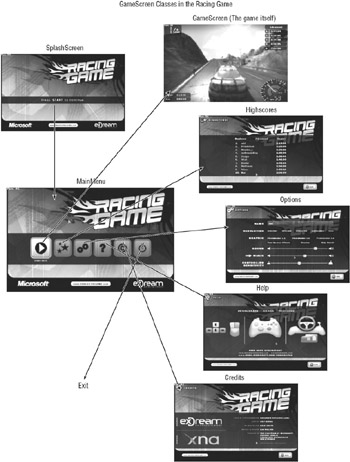 The splash screen (see Figure 14-8) is one of the easier classes; it basically just sits around and waits for the user to press start on his gamepad. Space or Esc on the keyboard or the left mouse button will let the player also continue if he does not have a game pad. The only thing for this class that is even remotely interesting is the code to let the “Press start to continue” text blink. 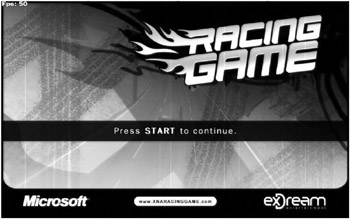 The RenderMenuBackground method is a little bit more complex. It is used to show the menu background behind the splash screen, which shows the car driving through one of the tracks. The car is controlled by the computer and the camera just follows it. The code for that is not very complex:

Thanks to the Render method of the Landscape class and the RenderCar method of the Model class you do not have to worry about rendering the landscape, track, or anything else here. The camera matrix makes sure you look at the correct position and the car advances through the track through the car matrix variable.

All other menu game screens also use the RenderMenuBackground method to render the game in the background, but it can be less visible in some game screens because you put darker textures in the front (for example, in the Credits screen it is harder to see the background anymore). It is just a background effect, however; you can see more of the game when you actually start playing it.

The Main Menu (see Figure 14-9) is a little bit more complex than most other menu screen classes, but even this class is just about 250 lines of code. Every other game screen can be started from here except the Splash screen, which is only shown initially after starting the application. The most important choices are starting the game and viewing the highscores (the first two buttons). 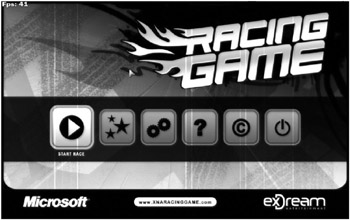 The coolest feature of this class is the menu button animation. Every button gets a float value between 0 and 1, where 0 is the smallest possible button size and 1 is the biggest button size. When you hover over a button with the mouse or select it with the gamepad or keyboard it gets bigger until it reaches 1.0. When you leave the button, it slowly gets smaller again.

The first button is initially set to 1. All other buttons are left at the smallest size (0).

Then in the Render method the button selection code and scaling of the buttons is handled. To make sure you do not hover over more than one button at the same time a helper variable is used for the mouse. If no mouse is used to select the menu buttons this variable will never be used.

The GameScreen class (see Figure 14-10) is the most important game screen because it handles the whole game logic. No game variables are stored here however, and you do not handle anything exclusive here, but all the important parts (landscape, track, car, objects, HUD, and so on) are still rendered and called from here. 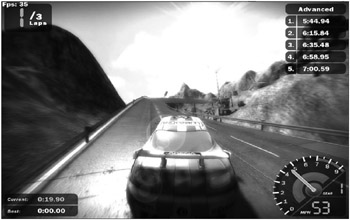 All the Render methods, even the in-game HUD, are located in the UIRenderer helper class for any UI rendering code and the rest is handled and rendered in the landscape and model classes; even the shadow mapping is mostly done there. All the rendering and game handling is called from here, so this class gives you a good overview of what happens in the game. If you write a game modification, start modifying code here. Comment out code here or in the called methods to quickly see what part of the game is affected by that change.

Then the post-screen glow shader is started and all the 3D game content is rendered. This includes the sky cube map, landscape with the track and all 3D models, and finally the car.

After the MeshRenderManager has rendered all 3D models you can add the shadow mapping effect to the 3D scene. The order of the calls here is important because if the 3D models are not rendered before showing the shadows, the shadows will not have the correct effect on them or will not work at all.

And finally the code for the UI in the game; if you want to get rid of it or change the HUD, here is the place for doing that.

The Highscores screen (see Figure 14-11) is very similar to the highscores of Rocket Commander, but all the online highscores are missing because no network code or web services were implemented yet. Again, the reason for that is the lack of network support in XNA, but it would be possible to implement that just for the PC version. 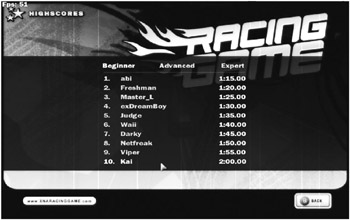 There are a couple of helper methods in the Highscore class that, for example, help you to determine the current rank in the game while the player is getting points for driving around the track, but most of these methods were already used in earlier games of this book.

The following code is used to render the top 10 highscore players on the screen. You will notice that the code is pretty simple thanks to the many helper methods in the UIRenderer class. If you just want to test the highscore game screen please use the unit test inside the class, which was used to position all the UI elements for this game screen in the same way it was done for most other game screens too. I also cheated a bit and used TestDriven.NET in Visual Studio 2005 and the new cool feature to re-run tests with a hotkey. This way I could practically code, press the hotkey, say “oh no,” press Escape, and fix the code until the class worked perfectly. In a matter of minutes most UI code was programmed this way.

The other game screen classes that are left are Options, Help, and Credits. They are all pretty similar to the highscore class and not really exciting. Options has some nice UI features and allows you to enter text with the help of the Input class and to select one of multiple sliders and drag them around with either the mouse or a gamepad. Use the unit test in the Options class to learn more about the features in this class. Both the Help and the Credit classes just display a texture on the screen, very similar to the SplashScreen class you saw earlier.