If your Linux system is being used as a multiuser computer, sharing the processing power of that computer can be a major issue. Likewise, any time you can stop a runaway process or reduce the overhead of an unnecessary program running, your Linux server can do a better job serving files, Web pages, or e-mail to the people that rely on it.

Utilities are included with Linux that can help you monitor the performance of your Linux system. The kinds of features you want to monitor in Linux include CPU usage, memory usage (RAM and swap space), and overall load on the system. The following sections describe tools for monitoring Linux. 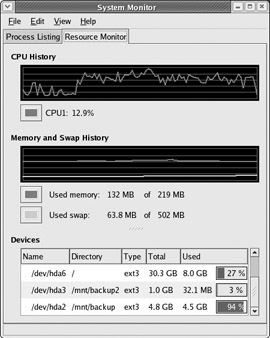 On the Resource Monitor window, lines scroll from right to left, indicating the percentage of your CPU being used as it rises and falls. You can also see how much of your total memory (RAM) is being used at the moment (and over time), as well as the amount of swap space being used. Scroll the devices at the bottom of the window to see the space being consumed on each of your hard disk partitions.

Click the Process Listing tab to see a listing of processes that are running currently. Click the columns in that tab to sort processes by name, user (who launched the process), memory use, percentage of CPU being consumed by the process, and process ID.

The example in Figure 10-5 shows a computer that is running with only 128MB of RAM. The Memory Used is running near the maximum, indicating the likely occurrence of performance problems as RAM fills up and data has to be moved to swap space. The CPU used is only about 19 percent, which indicates that the CPU is keeping up with the demand.

Start the top utility in a Terminal window, and it displays the top CPU consuming processes on your computer. Every five seconds, top will determine which processes are consuming the most CPU time and display them in descending order on your screen.

By adding the -S option to top, you can have the display show you the cumulative CPU time that the process, as well as any child processes that may already have exited, has spent. If you want to change how often the screen is updated, you can add the -d secs option, where secs is replaced by the number of seconds between updates.

By default, processes are sorted by CPU usage. You can sort processes numerically by PID (press N), by age (press A), by resident memory usage (press M), by time (press T), or back to CPU usage (press P). Figure 10-6 shows an example of top running in a Terminal window. 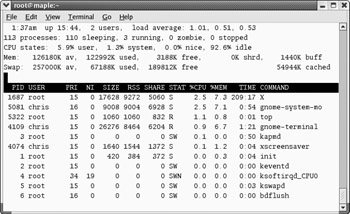 To effectively use a laptop computer, you need to be able to monitor and manage the laptop’s power usage. Using tools provided in Fedora, you can configure your laptop to:

Many older laptops do not include support for ACPI in the BIOS, so you must use APM to monitor and manage your batteries. For some newer laptops, ACPI may be required. In general, ACPI offers a more complete feature set for power management, but APM has more user-level support today.

To check whether ACPI or APM are supported on your Fedora system, you can use the dmesg command after a reboot. For example, type:

The following procedure was performed on a laptop that used APM to manage power events. It describes how to use the Battery Charge Monitor applet on the desktop to monitor your battery and the apm command to place your laptop in suspend mode.

If you are using the GNOME desktop, you can add a Battery Status Monitor to your panel to keep track of the power levels of your battery. The following procedure steps you through adding the monitor to your panel and configuring it to behave as you like:

The apm command lets you view information about your computer’s power management and put the computer in suspend mode (if it is supported on your laptop). Here are some examples of using the apm command:

Using the -m option, the apm command displays the number of minutes of battery life remaining (if that information is available). It may also give you information about the status of how the battery is charging and whether or not the laptop is currently plugged in.

The -s option of apm causes the laptop to enter suspend mode. You can start up the laptop again, in most cases, by pressing a key on the keyboard.