The Internet WWW architecture consists of clients (browsers), servers (web servers), and the wired network. Here, it is called the wired Internet. HyperText Transfer Protocol (HTTP) stands at the core of the World Wide Web. The HTTP controls the process between client and server. The communication is handled through TCP/IP (transmission control protocol/Internet protocol). The Web server is for storing content, i.e., Web pages written in a special language, hypertext markup language (HTML). To access Web pages, the client sends a request in the form of a Uniform Resource Locator (URL). In response, the Web server sends the HTML pages to the client. Then, the client uses a browser to view the content.

Compared to the wired Internet, the wireless network is characterized by limited bandwidth, high latencies, high data loss, and variation in long-term connectivity/availability. TCP/IP-based protocols work well over wireless connections, but the performance is slow. Additionally, most mobile devices have limited display capabilities and cannot deal with all the features of full HTML. Hence, many alternative protocols and markup languages were created for mobile environments. These are as follows:

According to the WAP Forum's white paper, WAP (Wireless Application Protocol) is an open, global specification that empowers mobile users with wireless devices to easily access and interact with information and services instantly (WAP Forum Ltd., 1999). The WAP is a standard for providing cellular phones, pagers, and other handheld devices with secure access to e-mail and text-based Web pages. Introduced in 1997 by Unwired Planet (now Openwave), Ericsson, Motorola, and Nokia, the protocol is designed to make use of the existing Web technologies. It also consists of a client but with microbrowser or mobile browser, Web server, and an additional WAP gateway. The WAP gateway acts as a translator between the client microbrowser and the Web server. The connection between the Web server and the WAP gateway is wired, but the network between the WAP gateway and the client is wireless. Shown in Figure 3 are the wired and mobile Web servers. 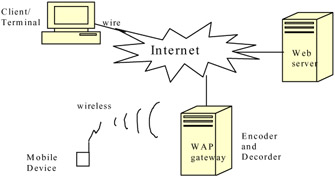 The communication between the WAP gateway and the client is binary encoded to reduce network traffic. The WAP gateway encodes and decodes all messages respectively. Unlike the Web page of WWW, WAP is based on a "deck of cards" metaphor that contains content and script programming (Hjelm, 2000). Thus, a deck of cards can be sent to the client, and the order of cards can be based on user input. The markup language is called WML. It also uses WMLScript, a compact JavaScript-like language that runs with limited memory. The existing Web server is fully capable of delivering WAP content after some configuration change in Web-server software. A WAP gateway is required to sit between the wireless client and the Web server that converts WAP requests into HTTP and vice versa. WAP runs over all the major wireless networks. It is device independent, requiring only a minimum functionality in the unit so that it can be used with all enabled mobile phones and handheld devices. To build a wireless Web server, we need to add a WAP gateway to the existing Web server. Hence:

The design objective of the gateway is to tackle the low bandwidth in the wireless network connection. The WAP gateway performs mainly four functions: switching between transport protocols, compression, compilation, and decompression. However, the crucial weakness in WAP protocol is that all data transferred between the WAP client and the Web server is decrypted at the WAP gateway, i.e., all data, such as credit card numbers, etc., exist as free text in the memory of the gateway (Christian & Jogensen, 2001). The WAP protocol fails to provide end-to-end security, i.e., from client browser to Web server. End users lose direct control of the privacy of the data. WAP 2.0 addressed this problem by proposing alternatives, such as discarding the WAP gateway, placing the WAP gateway at the Web server end of the connection, or using application level security on top of WAP. However, there is a trade off between optimization and security. On the other hand, i-mode and Web clipping can provide end-to-end security. Both are proprietary systems.

The i-mode is a wireless service developed by NTT DoCoMo in Japan. It is designed to provide mobile phone voice service, Internet, and e-mail. The i-mode protocol uses cHTML as its markup language. NTT DoCoMo constructed a packet-switched network alongside existing digital cellular networks that allows for a constant connection with the Internet (Ratliff, 2000). The architecture of i-mode is shown in Figure 4. When any developer designs secure i-mode applications, NTT DoCoMo requires the developer to sign a confidentiality agreement in order to access the i-mode proprietary Application Program Interfaces (APIs). It is predominately used in Japan. Also, each carrier in Japan has an Official Site Service. The content provider (Web site or commerce site) needs to register with the carrier to become an Official Site, which will be listed on the home page of the carrier. It is difficult to type long URLs on a mobile phone. The user can connect to the Official Site easily by navigating the menu, thus giving the content provider a much higher chance of having the site accessed. 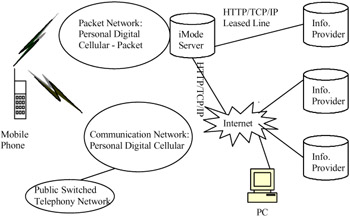 Figure 4: The Architecture of i-Mode

Another benefit of the Official Site is that the carrier will collect access fees from users when they access the content. Having payment services provided by the carrier makes it easy for content providers to engage in m-commerce without having to address issues related to payment systems and technologies. NTT DoCoMo includes a 9% surcharge on all fees collected for the content providers. Furthermore, the Official Site is the security. The i-mode provides a dedicated line connection service between the service provider i-mode gateway and the Web server of the Official Site. Content providers, such as financial institutions, have a highly secure connection. The carrier can use the mobile phone unique identifier and the IP address of the carrier gateway to build a secure system.

Web Clipping is a proprietary technology developed by Palm. The architecture of Web Clipping comprises the Palm device, a Web-Clipping proxy server, and the content server. Clipper software is installed in the Palm device to support Web Clipping. It is able to interpret and present a proprietary format called Web Clipping application (WCA) format. The format reduces the amount of data transferred over the air and the required storage on the Palm. The Web Clipping proxy is for translating the HTML content into this proprietary WCA format, and it resides at the 3Com Corporation's data center. Encryption and authentication between the handheld and the Web-Clipping proxy server is performed by Elliptic Curve Cryptography, which offers an extremely high level of security with a small amount of code. As a result, the data is encrypted and transported directly to the enterprise or content server, passing through any network as if it was in a sealed envelope.

Among worldwide mobile Internet users, only 1% use Palm, 61% use i-mode, and 38% use WAP (Vacca, 2002). WAP and i-mode are the popular standards for writing m-commerce applications. Since the introduction of i-mode in February 1999, there are 30 million users today. Almost everyone is active in the service. On the other hand, the launch of the WAP service in Europe failed, as the services were not as good as users expected—they were slow and not easy to navigate using a small-sized phone. The i-mode service is a huge success. NTT DoCoMo is forming strategic global partnerships to implement i-mode services; they teamed up with AT&T in the United States and Hutchison in the United Kingdom. Summing up, there are several factors that contributed to this success:

The WAP service was launched in Europe almost at the same time, but the response was poor. Many say that it is a flop. The reasons for the failure are as follows:

Though WAP is an open standard, it has become clear that i-mode, the proprietary standard, will play a dominant role in m-commerce applications. As 2.5G and 3G will be widely available, the data throughputs will be high. In addition, improved technology enhanced the performance of the handheld devices. The size of the RAM more than doubled every year, and the processor speed increased every three to six months (Zetie, 2002). The growth rate of technologies such as compact flash memory type II offers 1 Gbytes or more. Toshiba has a 10 Gbytes drive in PCMCIA format. The HTTP protocol and markup language are an attractive solution for mobile devices.

The Short Message Service (SMS) has grown rapidly and is popular in Europe. SMS messages are two-way alphanumeric paging messages up to 160 characters that can be sent to and from mobile phones. SMS messages are transmitted over the mobile phone's air interface, using the signaling channels. Therefore, there is no delay for call setup. SMS messages are stored in the Short Message Service Center and sent to the recipient when the subscriber connects to the network. According to new figures from the Mobile Data Association, mobile users in the United Kingdom sent an average of 2 million SMS messages per hour during September 2002. The popularity is due to the low cost, around 10p (US$0.015) for sending a message, while voice costs 9p and 30p per minute for land-line phone and mobile phone, respectively, at peak times. SMS generated significant revenues not only for network operators but also for Web portals. In the United States, however, the growth of SMS over mobile phones is hindered by a lack of carrier interoperability.