NTT DoCoMo released 3G in May 2001. The response is unexpectedly low. Only 114,500 users signed up for the 3G services. This failure is due to the high cost of 3G services. Also, the users have to buy a new mobile phone. Furthermore, the networks have limited coverage. M-commerce, which is more complex than e-commerce, faces a number of challenges (see Figure 5). 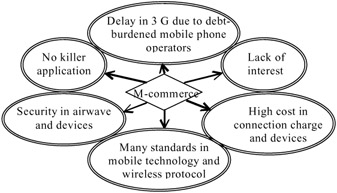 Mobile network operators (MNOs) are pushing m-commerce. The success of m-commerce in Japan changes the concept of "free" Internet to "paid" Internet. Users are willing to pay for the service. MNOs have foreseen a huge profit in taking control of the backbone of m-commerce—the wireless infrastructure. In addition, MNOs also play a dominant position in providing m-commerce applications. This created unreasonably high expectations of 3G services. Big companies in Europe, such as Deutsche Telecom, France T l com, Spain's Telef nica, and the U.K.'s Vodafone spent an estimated US$125 billion to US$150 billion on 3G licenses (Garber, 2002). Many of them are burdened with high debts. Banks downgraded their credit ratings. At the same time, the global economy is in a downturn after September 11, 2002, and the accounting scandal at Enron, the energy firm, which was followed by similar problems at WorldCom, the telecommunication giant in the United States. All of this bad news destroyed the confidence of investors in technology stock. It is extremely difficult for any of the MNOs to raise funds through the capital markets. Hutchison postponed the plan of raising money through the issue of bonds. With their huge debts, network operators find it hard to cut costs. Spectrum trading and network sharing are the ways to cut costs. These enable network operators to save money when deploying 3G. However, there are many unknowns in sharing and spectrum trading: competition, ownership of the license obligations, and responsibility for the license debts (Webb, 2002). Government support and assistance are important in resolving difficulties that arise.

The 3G requires more cells, and thus, more new radio stations have to be built. This requires a lot of investment. With huge debts, MNOs have significant difficulties in meeting the requirements to provide the new 3G services. MobilCom, the German mobile operator, is cutting more than half of its workforce. The preparation for 3G is on the shelf. In Singapore, mobile phone operators held discussions with governments to delay the rollout deadline for 3G. The debut of integrated 3G IC solutions was delayed; the "life-cycle" of GSM, CDMA, TDMA, AMPS, and particularly, 2.5GPRS systems will be extended (Telford, 2002). In the near term, the future of 3G looks gloomy. NTT DoCoMo wrote off a 126 billion yen (about US$1 billion) investment in Hutchison 3G (U.K.). Also, Orange, which is billions of euros in debt, shelved its plan to run a 3G mobile service in Sweden.

Lack of Interest and High Cost

On the other hand, MNOs in Europe have the problem of falling revenues. According to Gartner's report, the connection growth for last year declined from 57.4% to a miserable 19.5% in the United Kingdom (NUA analysis, 2002). The Western European market reached the saturation point, where the mobile possession rate is close to 100% in some countries. In addition, mobile users have "upgrade fatigue," i.e., they are reluctant to upgrade their mobile phones. A report from the World Market Research Center, released in May 2002, predicted that 3G sales are likely to be sluggish because of a lack of consumer interest in new services. The research done by the mobile consultancy group Detica also warned that there is no single "3G killer application" that will entice large numbers of people to embrace 3G. In 2002, the mobile phone business pushed hard on picture messaging, which requires new expensive handsets. The response has been poor. The mobile revenue mainly comes from voice calls and SMS messaging.

Young Market with Many Standards

This is a young market with many existing standards. 3G standards have some commonalities, but they are not fully compatible with each other at the air interface (radio-transmission) level. This imposes a limitation on global roaming and the creation of mass-market volumes for terminals and infrastructures. The third-generation partnership project (3GPP) was formed to produce technical specifications for 3G mobile systems and works with different 3G systems. In addition, the spectrum problem in the United States casts a shadow on global roaming. The Department of Defense occupies the spectrum band needed for 3G services. After September 11, 2002, the U.S. military is unlikely to give up the spectrum. This introduces further technical difficulties. In addition, Japan is going it alone to develop a fourth-generation standard (4G) that could offer data rates of up to 100 Mbits/s. However, during an International Telecommunication Union meeting on 4G, Japanese representatives limited the debate in order to enshrine Japan's vision as the de facto standard for 4G (Wireless Web Analysis, 2002).

WAP is disappointing. Though i-mode is popular, it is proprietary. However, both formats have the quality that they benefit from each other. There is a need for an open standard for wireless protocol. Industry cooperation is a must if a solution is to be found. At present, industry is working toward limiting the number of markup languages available for mobile devices. Both WML and cHTML are now migrating into XHTML (extensible HTML), which are XML based. There are still many multiple proprietary browsers and operating systems. Developers find it hard to develop applications with the myriad of handheld devices. In the future, it all depends on the role of XML and the evolution of the WAP standard.

The advances in technology resulted in a convergence of the functions of mobile phone and PDA devices. Mobile phones are commonly equipped with PDA functionality, such as a large screen and easier methods of input, e.g., pen with touch screen. PDAs have a phone function. There are different kinds of handheld devices from phone and computer manufacturers. The market for handheld devices is different from the personal computer market. For instance, Nokia not only produces the phone (hardware) but also develops Symbian (the software), together with other phone manufacturers such as Motorola. This is also the problem with PDAs. Each device comes with its own proprietary operating system. Many standards are competing with each other. Microsoft joined the competition by rolling out two operating systems: Pocket PC2002 and the smartphone system for PDAs and mobile phones, respectively, in 2002. Both systems can be synchronized to a desktop PC, a convenience for business users. Microsoft, together with Orange, launched an SPV (Sound, Picture, and Video) phone, the first mobile phone with the Microsoft smartphone system, in October 2002. The participation of Microsoft in the handheld device market will have a major impact on market development.

Mobile communications offer users many benefits, such as portability, flexibility, and increased productivity. Handheld devices allow remote users to synchronize personal databases, and they provide access to e-mail, Web browsing, and Internet access. The most significant difference between wired networks and mobile communication is that the airwave is openly exposed to intruders. This is the main source of risk—some existing problems have been exacerbated and some are new. Analog phones using 1G technologies are more vulnerable to eavesdropping than digital cell phones. The unencrypted analog signal can be intercepted by using simple radio scanners, whereas digital phones are protected using encryption. Nevertheless, digital systems are also subject to attack. For instance, there is the "man-in-the-middle" problem, where the intruder sets up a base station transceiver with a modified phone. The intruders put themselves in between the target user and a genuine network and have the ability to eavesdrop, modify, delete, reorder, replay, and send spoof signaling. The intruders eavesdrop on signaling and data connections associated with other users by using a modified mobile phone. 3G imposes more security measures to defeat false base-station attacks. A security mechanism including a number sequence is implemented to ensure that the mobile can identify the network. Overall, 3G technology has far greater security than 2G and 2.5G.

The wireless handheld device provides the advantage of mobility for mobile workers but also creates new types of security risks. The types of risks are summarized as follows (Karygiannis & Owens, 2002):

Viruses have not been widely considered a security threat in PDAs or mobile phones because of their limited memory and processing power. Moreover, users typically synchronize their data with their PCs, so they can recover any lost or corrupted data simply by synchronizing with their PCs.

Technological developments will increase the computing power and storage in handheld devices. However, insufficient battery life and power consumption will impede the potential growth of m-commerce, even when 3G is widely available. At present, the battery life is very short. It can last for two or three hours for surfing the Internet or talking. The battery has to be recharged from time to time, or a second battery must be used. Fuel cells will be a solution to this problem, but they are in the early stages of introduction and will be expensive. In the near future, short battery life is a major barrier in handheld devices. Besides this, the small screen is another limitation. PDAs have a larger screen (4.9 3.1 inches). The color touch screen makes it easier for users to navigate the Web, however, they are expensive, normally around US$600 compared to a black and white one priced at US$100. Furthermore, mobile phone users still prefer the small-sized phones. The screen of a mobile phone is 2 2 inches, which causes difficulty when surfing the Web. Many mobile users are aware of 3G but do not understand the "user experience." A low-power, inexpensive, high-resolution color display would seriously increase the growth of m-commerce.