The first-generation (1G) cellular systems were the Advanced Mobile Phone Systems (AMPS) introduced in 1983 in the United States. The 1G systems are analog, circuit-based, narrowband, and are suitable for voice communication only. In the 1990s, the second-generation (2G) systems were introduced. The 2G systems are digital, circuit-based, and narrowband. The 2G system is primarily for voice communication with limited data communications. The major 2G networks are based on the technologies of Code Division Multiple Access (CDMA), Global System for Mobile communications (GSM), and Personal Digital Cellular (PDC).

Many mobile operators are currently upgrading the 2G to 2.5G or 3G. Some 2.5G systems were implemented using General Packet Radio Service (GPRS). GPRS is a packet-based extension of GSM and provides high data throughout. The objective of integrating GPRS into GSM is to increase the number of connections per bearer by utilizing the given physical channels more efficiently than the existing service. Packet switching means that GPRS radio resources are only used when users are actually sending or receiving data. Hence, the scarce radio resources are being utilized efficiently, and the data rate is 64–144 kbps. It brings Internet protocol (IP) capability to the GSM network. The GSM/GPRS systems will then evolve into Enhanced Data for GSM Evolution (EDGE) and finally into the Universal Mobile Telecommunication System (UMTS), the third generation (3G).

The 3G technology comprises three primary standards: W-CDMA (wideband CDMA), CDMA2000, and TD-CDMA (time division CDMA). Most of Europe and Japan settled on W-CDMA, an upgrade to the GSM standard, which is widely used in those areas (Garber, 2002). TD-CDMA, developed in China, will be used there only. The United States is working with all three major 3G standards. However, AT&T, the largest mobile operator in the United States, is upgrading their networks to W-CDMA, which will be the dominant global 3G technology. 3G's data rate is up to 2 mbps when stationary, less when moving. 3G networks provide higher-speed transmission to support high-quality audio and video, as well as a global roaming capability. This means that the same mobile phone can be used in London, New York, and Tokyo. Shown in Table 1 is a comparison of 2.5G with 3G in services and data rates. In Japan, NTT DoCoMo rolled out 3G in May 2001. Hutchison rolls out the first U.K. 3G system in March 2003. Verizon launched the first U.S. 3G network in January 2002. There are two devices available. One is a handset and has to be cabled to a computer. The other is a wireless modem in a PDA. A 3G phone is not available. In the mobile Internet or m-commerce, Japan and Europe lead the world, rather than the United States, the leader in Internet— e-commerce.

Cellular networks are based on the technique of frequency reuse, so that the limited radio spectrum will receive maximum use. Illustrated in Figure 1 is frequency reuse. In cellular radio networks, the area covered by one base station is reduced, and other base stations are installed with small overlapping areas. Adjacent cells need to use different frequencies to avoid interference, but the same frequency can be reused in nonadjacent cells. The coverage area is split into many cells. By splitting an area into many smaller cells, the overall network capacity increases, but a decrease in the reuse of frequency is also seen. The major factors in determining the optimal size of each cell to be considered are as follows: 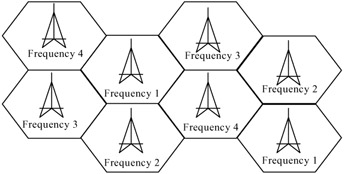 GSM is widely implemented in 178 countries and accounts for more than 70% of mobile phone users in the world (UMTS Forum, 2002). The GSM is composed of three main elements: the switching subsystem, the base station subsystem, and the mobile station. In Figure 2, an overview of the complete GSM system is presented. A mobile station is carried by the subscriber, such as a mobile phone. A GSM mobile phone consists of two parts. The first part contains the hardware and software relating to the mobile interface. The second part is the Subscriber Identity Module (SIM) card, used to store the subscriber's personal data. The subscriber uses the SIM card to check into the mobile network. It contains the secret keys needed by the GSM security algorithms for authentication and encryption. Also, the SIM card comes with a CPU, EEPROM memory for the file system, a ROM memory for the card operating system, and a RAM memory for program execution. Java applications can be run on the card itself. 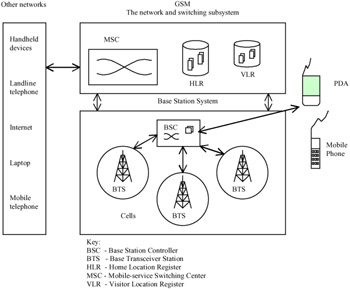 The base station subsystem consists of BTS (Base Transceiver Station) and BSC (Base Station Controller). The BTS comprises the transmitting and receiving facilities, including antennas and all the signaling related to the radio interface. A BSC generally manages several BTSs and is linked to the switching subsystem, which forms the gateway network between the mobile network and the wired networks, such as the public switched telephony network. The switching subsystem consists of the mobile-service switching center (MSC) and a number of databases—the Home Location Register (HLR) and the Visitor Location Register (VLR) (Walke, 2002). It provides all the functionality needed to handle a mobile subscriber. The HLR is concerned with the billing of subscribers, and the VLR is used to manage the subscribers currently roaming in the area under the control of the MSC.

The evolution of GSM is via stepwise upgrades through the extension and the further development of existing cellular systems. This provides a faster availability of service and the opportunity to prepare customers for new services, 2.5G or 3G. GPRS or 2.5G can be built on the top of the existing GSM infrastructures; thus, the existing infrastructure and equipment can be reused. In other words, the GSM base station subsystem (BTS and BSC) is unchanged. A packet-based switching subsystem is being added to the GSM core subsystem. 3G has a high data rate and requires more cells. More GSM base station subsystems have to be added. There will be significant investment in new equipment and software.