One of the things that became obvious during the writing of Professional DotNetNuke ASP.NET Portals (Wiley Publishing, Inc.) was that our branding message was not clear. Although our trademark and domain name reflected "DotNetNuke," our logo contained an abbreviated terminology of ".netnuke." This led to confusion for authors of the book as well as the publisher in terms of what was the correct product branding. As I mentioned earlier in this chapter, the initial branding was constructed with little or no foresight; therefore, it came as no surprise that a major overhaul was necessary.

Initial conversations within the Core Team offered some interesting and sometimes surprising opinions on the DotNetNuke brand. When discussion came to a stalemate, the topic was raised in the public forums that resulted in a similar scenario. Some folks considered the "nuke" term to be too offensive, unprofessional, or shocking to be used as a serious brand name. Others placed a significant metaphorical value in the current logo, which contained a gear embossed with a nuclear symbol. Some preferred a transition to the "DNN" acronym that was often used as a shorthand reference in various communication channels. Further debate ensued over the category we occupied (portal, content management system, framework, and so on) and the clear marketing message we wished to convey.

As the project founder, I had my own opinions on the brand positioning and ultimately decided to resort to an authoritarian model rather that a committee model so that we could make a decision and move forward. From my perspective, when it comes to technology companies, there is a lot of acceptance for non-traditional brand names (consider Google, Yahoo!, Go Daddy, and so on). In addition, due to the press coverage of the Microsoft Hosting program, the DotNetNuke name achieved a significant amount of exposure; therefore, a complete change in brand would impose a serious setback in terms of brand acceptance and market reach. Taking into consideration the valued perspectives of the Core Team and community, I felt there should be a way to provide a win-win solution for everyone.

I first tried working with a local design company (the same company that produced the DotNetNuke 2.0 site skin), and although they had a real talent for brand identity services, there were no concepts produced that really grabbed my attention or satisfied my goals for the project. Perhaps I was being overly critical in my judgment of various designs, but I knew that I absolutely did not want to settle for a concept unless I thought it met 100% of my criteria. Although Nik Kalyani had been on the Core Team for eight months and had even expressed a serious interest in the marketing activities of the project, it was not until the re-branding exercise where his talents were truly exemplified.

Nik and I started an offline dialog where we quickly established some complementary goals, at least at a conceptual level. The basic decision was that we wanted to retain the full "DotNetNuke" brand name and strengthen rather than dilute its brand emphasis. We also wanted to reduce or eliminate the negative imagery associated with the nuclear warning symbol in the current logo. Although the abbreviated form of the word "nuke" tended to evoke a negative response from the general population (relating it to bombs and radiation), the expanded form of "nuclear" and "nucleus" had a much more positive response (related to science, energy, and power). The word "nucleus" also had some complementary terms associated with it such as "core," "kernel," and so on that worked well with the open-source project philosophy. The trick was to find a way to emphasize one aspect over another.

Nik spent countless hours designing alternative logo concepts. From a typeface perspective, he suggested using the Neuropol font, and I really liked the fact that it had a strong technical overtone but not so much that it could not be used effectively in other mainstream media applications. To achieve a uniform appearance for the typeface, we decided to use all capital letters — even though the standard format for the brand name in regular print would continue to be mixed case. Nik included a unique customization for the "E" and the "T" letters that resulted in a distinctive, yet professional styling for the word-mark contained within the logo.

Creating the graphical element for the logo was a much bigger challenge because we were looking for a radically new design that exemplified so many diverse project attributes. To summarize some of the more important criteria, we were looking for something simple yet distinctive, with at least some elements that provided a visual reference to the old logo for continuity. It needed to be scalable and adaptable to a wide range of media (both digital and print) and cost-effective to reproduce. And perhaps the most subjective item I promoted was that the logo should be stylish — with my acceptance criteria being, "Would my wife permit me to wear clothing embossed with the logo when we went out in public together?" Nik created more than 40 unique logo concepts before arriving at a design that seemed to catch the full essence of what we were trying to accomplish (see Figure 1-11). After working at this for so long and dealing with the discouragement and frustration, it was a euphoric moment to discover the proverbial "love at first sight."

It is amazing how many diverse concepts can be represented in a single image. The saying "a picture is worth a thousand words" is cliché, but in this case, it certainly summarized the final product. The new logo had the basic shape of a nuclear atom. The nucleus of the atom was shaped like a gear to retain its heritage to the previous project logo. The logo was two basic colors — red and black (using shades of grey to achieve a 3-D effect) — making it much more adaptable and simple to reproduce in a wide variety of media formats than the previous logo (which used shadows and gradients for 3-D effects). The gear had twelve teeth (a number considered to be lucky in many cultures). The intersection of the three revolving electron trails (referred to as the "triad") could still be subtly viewed as a nuclear symbol reference. With some creative inference, they could also be viewed as the three-letter project acronym: DNN. Later, someone on the Core Team mentioned that the triad bore some resemblance to the Perpetual Motion Interactive Systems Inc. "infinity" logo — a reference I had never formally recognized but something that I am sure played a subliminal role in my selection.

In terms of brand acceptance, we realized there may be significant community backlash related to the new creative brand, especially from companies who were currently leveraging the existing DotNetNuke branding in their marketing materials. Therefore we were pleasantly surprised at the overwhelming positive feedback we received regarding the new brand identity. Our goal was to roll out the brand in progressive stages with the DotNetNuke 3.1 product release representing the official brand launch to the general community.

With the creative elements out of the way, it was time to finalize the rest of the branding process. Because DotNetNuke serves many different stakeholder groups, it was difficult to come up with a product category that was focused but not too limiting in scope. From a marketing perspective, the board agonized over the optimal brand message. "Content management" was a powerful industry buzzword, but if you compared the capabilities of DotNetNuke in this area with other enterprise software offerings, it became obvious that it would be some time before we could be considered a market leader. The term "portal" had been so overused in recent years that it became severely diluted and lost its clarity as an effective marketing message. Conversely, the emerging term "framework" began to surface more regularly and was starting to gain industry acceptance with both developers and management groups as a powerful software development category. Because DotNetNuke's architectural principles were predicated on simplicity and extensibility, the framework category seemed to be a natural fit. The next step involved clarifying the type of framework. DotNetNuke was primarily designed for use in a web environment and its breadth of features made it well-suited for building advanced data-driven Internet applications. The resulting "web application framework" was an emerging industry category in which DotNetNuke could take an immediate leadership role. Where applicable, we could also leverage our "open source" classification to emphasize our community philosophy and values.

One of the toughest parts of any re-branding exercise involves updating all existing brand references to reflect the new identity. In DotNetNuke's case, this affected the content and design of the dotnetnuke.com web site, the marketing references in the DotNetNuke release package, and all technical and user documentation. Compared to the time it took to construct the new logo, the time it took Nik Kalyani to create a new site design was minimal (which is truly amazing considering the amount of time and effort that typically goes into a custom site design). I had long been a fan of Nik's minimalist style, which emphasized clean presentation, lightweight graphics. and plenty of whitespace. Nik's expert grasp of the DotNetNuke skinning architecture enabled him to create a combination of skin and containers that were applied in a matter of minutes to completely transform the entire web site. The new site design was creative yet professional and eliminated the "cartoonish" criticisms of the previous site design (see Figure 1-12). Nik also created our first professional document templates that would provide consistency and emphasis of our branding elements within our technical and user documentation. 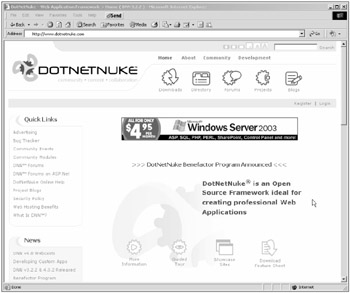