GhostTracker is a C# .NET-based application. The project consists of four files and two forms. If you look at the source code for this project you’ll see more than four files, but only four of the files were created; the rest were auto-generated as part of the C# project creation process.

The four files are as follows:

The two forms are as follows:

The basic design, the GhostTracker threading model shown in Figure 12-1, implements a listener thread that spawns a TargetController for each incoming connection. The TargetController can display a ControlForm to control the connected rootkit. Control panels are launched by double-clicking a list entry from the MainForm. 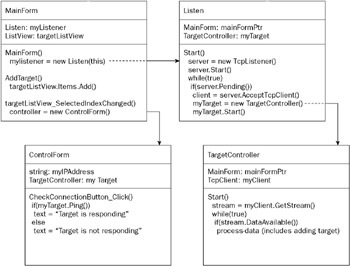