A dizzying array of hardware, software, telecommunications media, and technical expertise goes into internetworking. Switches, hubs, firewalls, packets, gateways, ports, access servers, interfaces, layers, protocols, serial lines, ISDN, frames, topologies-the list can seem endless. But there is one indispensable device in the middle of it all. A single, tangible entity that keeps packets moving in the right direction: the router.

In the most basic terms, internetworking is about nothing more than linking computers and people through a maze of intermediary telecommunications lines and computing devices. This takes routing, which, in essence, involves just two fundamental missions: determine a path along which a link can be made, and transmit packets across that path. It is within these two functions-which take place inside the router-that internetworking becomes easier to understand. This is because the router itself must cut all the complexity down to a level it can deal with. The router does this by working with everything, one IP packet at a time.

Looked at in this way, the router is the basic fabric of internetworks. Indeed, without the router, the Internet as we know it couldn't even exist. This is because of the router's unique and powerful capabilities:

In other words, routers make internetworks possible. They do so by providing a unified and secure environment in which large groups of people can connect. However, there are obstacles to bringing users together on internetworks, whether on a corporate intranet, a virtual private network, or the Internet itself. Figure 3-1 depicts how routing technology is the key to overcoming these obstacles. 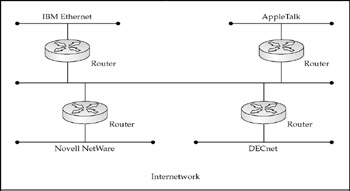 The router's ability to support communications between a wide variety of devices is certainly its most important role. Way back when, the computer industry spent decades and millions of dollars debating how computers were to talk with each other. All the jostling, positioning, and open struggling to create compatibility between proprietary systems met with limited success. Yet, in less than a decade, TCP/IP internetworking became a common platform across which virtually all computer and network architectures could freely exchange information.

The router's ability to filter out unwanted remote traffic is also important to internetworking. If users are bombarded with volumes of unwanted messages, or if they feel their systems can be easily broken into, they will resist linking up to internetworks. Properly configured filtering and access control provided by routers can give users (devices) some of the basic protections necessary to effectively participate in internetworks.

There are other important types of network devices besides the router, but understanding how a router works will go a long way toward your understanding the whole of internetworking. Before you can learn how to configure and manage routers, however, you need to know the basics of what makes one up. This chapter gives a general review of Cisco router hardware and software.