In a nutshell, routers do exactly what their name says: They route data from one network to another network, then another network, and so on until data is delivered to its final destination. Routers can also act as rudimentary traffic cops, allowing only authorized computers to transmit data into the local network so that private information can remain secure. Routers can be used to support many types of network connections, from dedicated connections, like Ethernet or leased lines, to dial-in connections. In addition to supporting these dial-in and leased connections, routers handle errors, keep network usage statistics, and handle some security issues.

When you download a file from a File Transfer Protocol (FTP) server, it's routing technology that ensures you are getting the file from a specific server and not from a different server hooked up elsewhere on the Internet. Routers direct the flow of traffic among, rather than within, networks. For instance, let's consider how routers can be used within a LAN to keep information flowing.

Design-O-Rama, as shown in Figure 3-2, is a computer graphics company. The company's LAN is divvied into two smaller LANs-one for the animators and one for the administration and support staff. The two subdivisions are connected with a router. Design-O-Rama employs eight people-four animators and four other staffers. When one animator sends a file to another, the large file will use a great deal of the network's capacity. This results in performance problems for the others on the network. 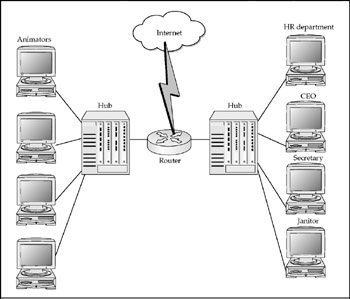 Figure 3-2: Routers can be used to improve efficiency within a LAN

To keep the animators from constantly slowing down the network, it was divided into two-one for the animators and one for everybody else. A router links the two networks and connects them both to the Internet. The router is the only device on the network that sees every message sent by any computer on either network. When an animator sends a file to a colleague, the router looks at the recipient's address and keeps that piece of traffic isolated on that LAN. On the other hand, if the animator wants to query the human relations department about vacation time, the router knows to direct those packets to the HR department's network segment.

Routers and the Internet

In our previous example, we examined how a router could be used locally. Now, let's broaden the scope of what routers do to include their functionality across the entire Internet.

For the sake of comparison, let's first talk about how a telephone call is routed across the country. Say it's Aunt Sadie's birthday and rather than send an e-mail, you want to call her. When you make a long-distance call, the telephone system establishes a stable circuit between your telephone and Aunt Sadie's. The circuit may involve hopping through a number of steps, including fiber optics, copper wires, and satellites. This endto-end chain ensures that the quality of the line between you and Aunt Sadie will be constant. However, if the satellite goes offline or work crews cut the fiber-optic cable, your conversation with Aunt Sadie will be cut short. The Internet avoids this problem by making its "calls" in an entirely different way.

Whatever information is sent across the Internet (e-mail, Web page, and so on) is first broken into packets. The size of these packets will vary based on network parameters and other factors we'll cover later-for the purposes of discussion, let's say they are 1,500 bytes. The packets may be transmitted across a number of routers, each one sending the packet toward the destination device. The packets will be transmitted through the best available route. Each packet could take the same route, or none of the packets could take the same route. Once the packets show up at the destination computer, they are reassembled. This process goes so quickly that you wouldn't even know that the file was chopped into 1,500-byte packets and then reassembled.

Figure 3-3 illustrates how a packet-switched network operates. The routers in the Internet are linked together in a web. The packets follow the path of least resistance to ensure that they arrive at their destination in a reasonable amount of time. It seems logical that the packets would go through the least number of routers to get to its destination. However, sometimes the fastest route isn't the most direct one. This is because there may be network congestion or a slow link somewhere along the shortest "least hop" path. Routers can send the traffic around the congested portions of the Internet for increased speed and efficiency. 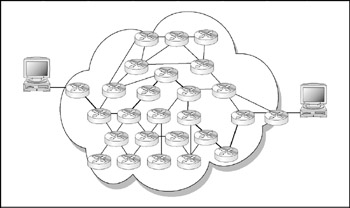 This may seem like a complicated system-as compared to the process followed when placing a telephone call-but the system works for two important reasons:

The routers that make up the main backbone of the Internet can reconfigure the paths that packets take because they look at all the information surrounding the data packet, and they tell each other about line conditions, like problems sending and receiving data on various parts of the Internet.

All Shapes and Sizes

Not every router is responsible for the fate of packets whizzing across the Internet. Routers come in different sizes and do more or less, depending on how big and sophisticated they are. For instance:

Let's consider the medium-sized router-it's probably something likely to be humming away in a small room at a typical small or medium-sized business. To keep it simple, let's say that this router only has two places to deal with-your LAN and the Internet. The office LAN connects to the router through an Ethernet connection. The router might also have two connections to your company's ISP-a T3 and an ISDN connection. For the most part, your traffic comes and goes over the T3 line. However, the ISDN line is used in the event something goes awry with the T3 line. In fact, the router is configured to send data across the ISDN line, because the configuration table has been programmed to switch over in case of an emergency.

This router is also tasked with another function-it can be a "screening" layer of security against outside attacks. Although firewalls are routinely used to prevent access, and are strongly recommended (you would be insane not to use one when connected to the Internet), an external router should also be configured with security in mind.

The backbone of the Internet uses the third kind of router we listed. Cisco's Gigabit Switch Router 12000 Series is the kind of equipment used to run the Internet. These routers are designed and built like supercomputers. For instance, the 12000 Series uses 200-MHz MIPS R5000 processors, which are the same kind of processors used in the computers that make special effects for the movies. Cisco's largest router-the 12816-can handle up to 1.28 trillion bits of information per second.

In a conventional internetwork, information would be transmitted using twisted-pair copper wire across a WAN or even a LAN. As useful and utilitarian as twisted-pair cabling and an electrical network have been, fiber optics allow information to be transferred at immensely higher rates. In the past, when computers shared only brief conversations across the miles, electrical networks could handle the load. But now, as information is shared as it has never been shared before, there is a clear need for an upgrade in network capacities.

Comparing the bit rates in electrical networks to optical networks is like putting Woody Allen in a prison yard fistfight with Mike Tyson-there's just no comparison. The greatest things that optical networks have going for them is raw speed and huge capacity.

Common WAN links that move across electrical networks are T1 (1.544 Mbps) and T3 (45 Mbps). On the LAN front, things get a little better. Most organizations use 10 or 100 Mbps Ethernet. The top-of-the-line Ethernet clocks in at 10 Gbps. However, once fiber optics gets into the race, look out.

At their slowest, fiber-optic networks speed along much faster than a T1 or a T3. Once fiber shifts out of first gear, there ceases to be a comparison. When discussing optical networking speeds, you'll hear the terminology change from T1 or T3 to OC. OC stands for optical carrier. OC takes over where T leaves off. Once the optical carrier gets involved, speeds not only reach 1 Gbps, but even leave 1 Gbps in the rearview mirror.

As you can see, the speed rates in optical networks (not to mention their development) are increasing at an amazing velocity. Thanks to dense wavelength division multiplexing (DWDM) optical bandwidth will only increase, because more than one stream of data can be introduced on a single run of fiber. More on that in a moment.

There are two prevalent technologies in the world of optical routing: SONET and DWDM. SONET is the oldest and most popular technology, while DWDM is somewhat of a new kid on the block, but supports capacities much greater than SONET. Let's examine these technologies in a little more depth.

SONET The most basic and popular architecture for an optical network is the Synchronous Optical Network (SONET).

SONET is a standard for optical telecommunications transport developed by the Exchange Carriers Standards Association (ECSA) for the American National Standards Institute (ANSI), the body that sets industry standards in the United States for telecommunications and other industries. The comprehensive SONET standard is expected to provide the transport infrastructure for worldwide telecommunications for at least the next two or three decades.

SONET is so speedy that you could transmit an entire 650-MB CD-ROM from New York to Seattle in less than one second. Not only is SONET fast, but it's also rather versatile. Voice calls from one office to another can be multiplexed along with data and fired out across the same fiber. Furthermore, because of the generous bandwidth SONET affords, compression and encapsulation into Internet Protocol (IP) packets is unnecessary. For comparison's sake, a single OC-3 connection can carry more than 2,000 simultaneous voice calls. In addition, all types of data can be multiplexed alongside the calls.

DWDM In its beginning, SONET delivered bandwidth that was previously unimaginable. At the time, delivering OC-3 levels (155.52 Mbps) provided more bandwidth than anyone knew what to do with. Of course, those were in the mid-1980s, a decade before the Internet and high-bandwidth applications. Technology kept delivering faster and faster optical carriers. After OC-3, there were OC-12, OC-48, and beyond.

DWDM is a technique in which multiple signals can traverse a single strand of optical fiber. The lasers used in optical networking can be tuned to different wavelengths (think of them as different colors). As such, it is possible to put multiple colors on a single fiber. When the receiving router sees the various colors, it knows which colors to separate out for which data streams, as shown in Figure 3-4.

Figure 3-4: Multiple transmissions can be sent on a single fiber using DWDM

Cisco also provides a certain level of modularity with its devices. Rather than make a few models, with a predetermined number of ports set up for Gigabit Ethernet and another amount dedicated to SONET or DWDM, the company has developed cards and modules that can be plugged into a router, making it customizable. That is, you can decide to load the router with SONET modules, DWDM modules, or any combination of optical and electrical you please.