The sample Frog class created thus far exposed the following abilities: Eat, Sleep, and Jump. In the real world, over thousands of years, a new kind of frog may evolve from this original population of frogs and develop new abilities, effectively giving two species of frog. For example, the new species would inherit all of the abilities of its ancestor, and additionally it could develop its own ability, specifically the ability to fly. The two kinds of frog would therefore be Frog (the original) and FlyingFrog (the new). FlyingFrog is said to have descended, or derived, from Frog, and Frog is an ancestor of FlyingFrog. 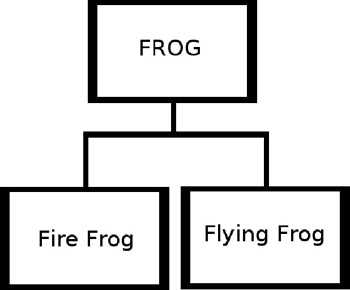 While one class can inherit from another, it can also inherit from many; inheritance is not restricted to a one-to-one relationship. Inheriting from more than one class is called multiple inheritance, and such classes inherit all properties and methods from all superclasses. Consider the following code: