Simply put, the Host Bus Adapter (HBA) is the link between the server and the Storage Area Network. Similar to the Network Interface Card (NIC), HBAs provide the translation between server protocol and switch protocol. HBAs connect to a server's PCI bus (see Chapter 7) and come with software drivers (discussed in greater detail in the following chapter) that support fabric topologies and arbitrated loop configurations.

HBAs are available in single port or multiple port configurations. Multiple ports allow additional data paths for workloads moving between the server and the switch via a single HBA. In addition to containing multiple ports (a maximum of four, at this point), a single server can hold, at most, four HBAs. Today, any single server can possess 16 ports (four ports times four HBAs), or 16 separate points of entry into the switch. However, keep in mind that four discrete ports on one HBA increases the risk for single point of failure along those data paths.

In providing the initial communication with the I/O from the server, HBAs encapsulate SCSI disk commands into the Fibre Channel layer 2 processing. HBAs communicate within the FC standard through the class of service defined by the Name Server at the time of login. As such, the HBA plays a key role in providing levels of efficiency in executing the operating system's I/O operations. Figure 14-4 illustrates an HBA's basic functions.

Figure 14-4: The basic functions of the FC Host Bus Adapter

One key duty of any HBA worth its bandwidth is discovering and mapping the storage resources available to it within the switch fabric. This mapping is critical to the devices that are available to any particular server. As will be discussed in the next chapter, there are various ways to restrict access to storage resources, such as zoning. It is important to note here, though, that HBAs must deal with this issue in an effort to understand the devices it must contact on behalf of the server, which it ultimately works for.

As you might expect, all of this becomes even more complex in supporting arbitrated loop devices on the switch.

Depending on the vendor, additional functionality is bundled with different HBAs. These functions range from software RAID functionality to advanced management functions (for example, diagnostic functions and the new enclosure services provided by many vendors ). In the future, additional functionality will come to include a virtual interface that bypasses much of the layered processing currently required. For more information on this, check out the discussion on InfiniBand in Chapter 20. But don't say I didn't warn you.

The major reliability questions of any HBA are twofold. First, the HBA's compatibility with its server's operating system is key to the effective operation of the FC network in total because each operating environment has unique differences in how it handles base I/O, file system, and buffering/caching methods . It is important to understand at a macro-level the differences between a UNIX integration and implementation of an HBA versus integration and implementation within a Windows environment. The second factor is the compatibility, at a software level, of the switch's fabric operating system and the HBA's software drivers. This requires an understanding of the supported release levels of any given switch vendor against any particular HBA vendor. Since many SAN components are acquired through OEM relationships, compatibility can become sticky when intermixing equipment from different vendors. As shown in Figure 14-5, HBAs play a critical role in the interoperability of a SAN configuration. 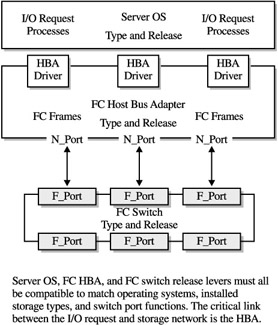