The Fibre Channel switch is the heart of any Storage Area Network configuration. It connects the user to the data being stored in the SAN. Like a heart, all information traveling through this closed system will sooner or later pump through the switch. Within the switch are connections, called ports, which function in different ways depending on the type of device connected. There is an effective Fibre Channel standard, called the T11.3 standard, which is the ANSI standard governed by the X3T11 group and defines the usage of the port via the Fibre Channel protocol. The T11.3 standard provides a set of guidelines for vendors to follow-a common language, so to speak. The Fibre Channel standard defines three types of ports:

It should be noted that, in general, Fibre Channel switches are categorized in terms of port capacity and their capability to sustain port failures. Low-end switches, while cost-effective , support only a base set of functionality in connecting devices to the network; moreover, the ability to connect to other switches or fabrics is minimal. Low-end switches offer no real port failure tolerance. The class of switches defined for entry level and mid-range usage is referred to by the generic term Fibre Channel switch . A glass ceiling of port counts exists that separates the FC SAN switch from the Director level products. With port counts at or above 64, including internal path redundancies for fault tolerance, the Director class storage switches are used for large enterprise class storage configurations. Feature function notwithstanding, there is a clear cost difference between low-end Fibre Channel switches and Director Class switches. The difference is not only clear, it is quite large.

Unless a user has a high-end requirement, most users start with a handful of low- end switches, as well as the myriad problems associated with them, and end up very quickly needing to bump up to Director Class switches. The point is, you may not need the ports now, but you may very well need the functionality depending on the service level requirements of the applications being supported.

As stated previously, the F_Port, also referred to as a Fabric Port, connects server and storage devices to the switch itself. A device plugged into the switch's F_Port is referred to as a node, and, in FC terms, is identified as an N_Port. If used in an arbitrated loop topology, it becomes an NL_Port. For instance, a server, when plugged into the switch, creates an N_Port, whereas a storage device using an arbitrated loop is recognized as an NL_Port. A basic F_Port is shown in Figure 14-1. Operating as FC nodes, they are identified by the switch as their particular N_Port or NL_Port designation. 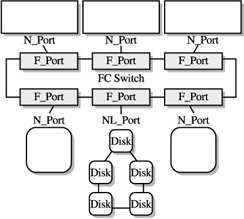 All devices attached to a Fibre Channel switch must log in. When a device is attached, it accesses a file in the Name Server database within the switch that contains information explaining to the server just what this device is. The Name Server informs the switch of the device's name , address, type, and class of service. It is the formal introduction between switch and device. Anyone putting together a Storage Area Network must make sure the devices they are planning to attach (or are going to attach in the future) are supported by the switch. If a device is not supported, it becomes all but useless to the SAN. Keep in mind, too, that arbitrated loop login will take longer than general fabric login or import login, given the extra loop and device assignments.

The Name Server, shown in Figure 14-2, registers a device's port address, port name, node name, class of service parameters, and the Fibre Channel layer 4 (FC-4) protocols it supports, as well as the type of port. The Name Server also provides the information one device, like a server, needs to find another device on the network, like the storage. Port name and port address are contained within a single table so that a device can be referred to by its name or by its address, much the way a web site can be called up by its URL or IP address. This is helpful as Storage Area Networks increasingly have IP ports made available to them. The Name Server supplies a method of recognition between the two types of ports, regardless of the protocol. When connecting switches, it is paramount that each switch's Name Server be synchronized and consistent with one another. 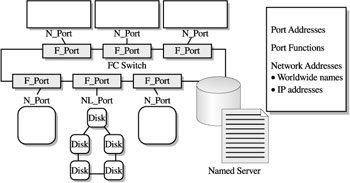 Any changes made to the devices attached to the switch are handled by either voluntary or involuntary services provided within the switch. As devices or connected switches are upgraded, port usage can become volatile. This is an important aspect in change management within the port itself. How these changes are made is dependent upon vendor service and implementation. Certain vendors automatically update the Name Server using State Change Notification (SCN) or Registered State Change Notification, which is an example of an involuntary change. A voluntary service consists of, you guessed it, using the two preceding methods to update the Name Server yourself. At this point, you may be asking yourself-and rightly so-just how is that voluntary?

E_Ports, also referred to as expansion ports, connect one switch to another. These switch ports have become critical given the rapid expansion of multiple switch configurations needed to support larger and larger server and storage capacities . E_Ports are now fundamental to the operation of a Storage Area Network and should be considered carefully when designing and implementing any SAN configuration.

The E_Port, as shown in Figure 14-3, provides the means by which one switch fabric communicates with another switch fabric. For this to happen, a compatible connection is required. This allows the E_Port to successfully coordinate with the Name Servers within each switch, synchronize frame transfers between switches, and facilitate interswitch access to storage resources. Utilizing arbitrated loop configurations between switches, while possible, increases the overall risk factor in the efficiency of an E_Port because of the increased overhead and treatment of the NL port as a separate network, which dramatically increases the number of addressable units and decreases bandwidth utilization. 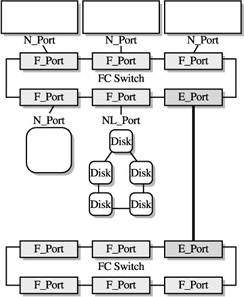 Figure 14-3: Extending the switch with an E_Port

The G_Port is a generic port and, depending on the vendor's implementation, can be used as either an F_Port or an E_Port. In other words, G_Ports are universal ports that can be used for a combination of functions. Although we haven't covered the necessary overhead in implementing a port configuration for issues such as recoverability and redundancy, G_Ports are likely candidates for recoverability and redundancy usage in light of port failure.

G_Port populations will dramatically increase, as ports become multifunctional and autosensing becomes more prevalent . Switches will come equipped with 64 so-called generic ports, and will distinguish themselves as either F_Ports or E_Ports when a device or an additional switch is attached. This adds critical switch flexibility when configuring multiple switch operations-all of which increases the cost per port.