IIP chose to acquire a NAS solution for headquarters and each of its remote work sites. The evaluation proved that the requirements for capacity, access, and budget were well suited to the NAS solution.

Given the growth and support required for IIP for the next 12 months, the ability for the organization to absorb a new technology such as Fibre Channel would have been beyond the current budget limitations. In addition, the learning curve mistakes with the SAN could not be afforded with a small company such as IIP, where there is no time, space, or budget for test or beta machines. The IIP IT evaluators determined that SANs would probably be in the companys future as bandwidth catches up to the current network capacity and the need to provide capture stations with at least 100MB-per-second speeds just to keep up with the increased scanning capture operations.

The requirements and evaluation are further depicted in Table A-1. The evaluation is based on a score of 1 through 10, with 10 being the highest, or best, score. Vendor selection is specific to the customer and the competitive nature of an acquisition, although it is recommended that a minimum of three bids be requested once workload estimates have been concluded.

Along with the storage requirements, IIP provided a list of service requirements it had developed in conjunction with an outside consultant. These requirements, along with the capacity, access, and management parameters, drove the decision to go with NAS. Although cost was a factor, the costs of the proposals were all within 10 percent of each other.

Implementation of the NAS devices provided additional activities. Although minimal, these still provided additional time before the devices were used in production. The items are summarized in the following list. Note that any of these are reflective of the operating environment and maintenance status of both operating systems and the network.

The final configuration provides increased storage capacity and enhanced performance. The IIP scanning process is now being upscaled with new customers and imaging projects. In addition, the space is being utilized on an automated basis from new project initiation to deletion after delivery. Figure A-3 illustrates the NAS configurations that support the revised IIP systems infrastructure. 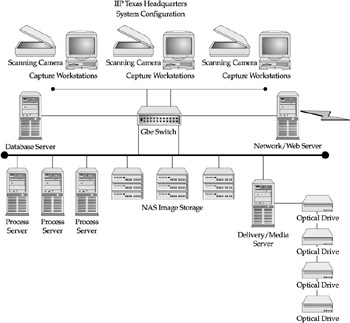 Figure A-3s NAS configuration illustrates the increased capacity for storage of images, but it also provides the foundation for image access through the Internet. This was designed into the system to allow the remote work sites that have identical installations to upgrade to NAS devices. Over and above the increased capacity at all sites will be the potential ability to access images across the IIP storage network infrastructure. In other words, images scanned in New York could be evaluated in Texas, Washington, D.C., San Francisco, or other remote offices as they begin operation. This is an added business efficiency that takes advantage of the imaging expertise across the company without regard to location. It also allows clients eventually to be provided test and quality images through the Internet to further facilitate the delivery and client acceptance process.

In summary, the NAS solution turned out to be a good fit for IIP. Even though its application appeared to have many proprietary processes and software processes, NAS operated within the bounds of leveraging commodity infrastructures for networks, systems, and storage. With the exception of the database server, all the servers within the IIP infrastructure now share the available storage in the NAS devices. The acknowledgment of this value further expands the use of the NAS solution as the company began to configure its web and imaging software code development on the NAS devices.

The NAS solution for IIP provided a cost-effective solution for a small company, but it also provided the company with the necessary storage resources for expanding its business, which had grown dependent on a storage-centric product. The companys storage infrastructure is now poised to grow into the future with either more sophisticated products such as a SAN, or to continue to scale economically with further uses of NAS devices. Either way, IIP now has the business flexibility to meet the growing dynamics of the imaging business.