Winlogon is a trusted process responsible for managing security-related user interactions. It coordinates logon, starts the user's shell at logon, handles logoff, and manages various other operations relevant to security, including entering passwords at logon, changing passwords, and locking and unlocking the workstation. The Winlogon process must ensure that operations relevant to security aren't visible to any other active processes. For example, Winlogon guarantees that an untrusted process can't get control of the desktop during one of these operations and thus gain access to the password.

Winlogon relies on a Graphical Identification and Authentication (GINA) DLL to obtain a user's account name and password. The default GINA is Msgina (\Winnt\System32\Msgina.dll). Msgina presents the standard Windows 2000 logon dialog box. Allowing for other GINAs to replace Msgina enables Windows 2000 to use different user identification mechanisms. For example, a third party might supply a GINA that uses a thumbprint recognition device to identify users and extract their passwords from an encrypted database.

Winlogon is the only process that intercepts logon requests from the keyboard. After obtaining a username and password from the GINA, Winlogon calls Lsass to authenticate the user attempting to log on. If the user is authenticated, the logon process activates a logon shell on behalf of that user. The interaction between the components involved in logon is illustrated in Figure 8-8.

In addition to supporting alternate GINAs, Winlogon can load additional network provider DLLs that need to perform secondary authentication. This capability allows multiple network providers to gather identification and authentication information all at one time during normal logon. A user logging on to a Windows 2000 system might simultaneously be authenticated on a UNIX server. That user would then be able to access resources of the UNIX server from the Windows 2000 machine without requiring additional authentication. Such a capability is known as one form of single sign-on. 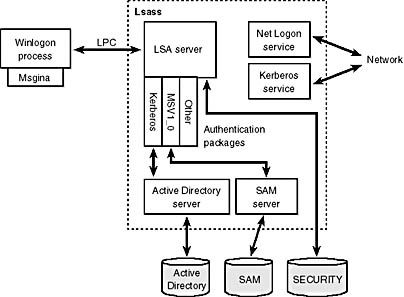 During system initialization, before any user applications are active, Winlogon performs the following steps to ensure that it controls the workstation once the system is ready for user interaction:

Before anyone logs on to a computer, the visible desktop is Winlogon's. After a logon, typing Ctrl+Alt+Delete switches the desktop from Default to Winlogon. (This explains why all the windows on your interactive desktop seem to disappear when you press Ctrl+Alt+Delete and then return when you dismiss the Windows Security dialog box.) Thus, the SAS always brings up a secure desktop controlled by Winlogon.

Winlogon then performs the following Windows operations to set up the window environment:

Logon begins when a user presses the SAS (Ctrl+Alt+Delete). After the SAS is pressed, Winlogon calls the GINA to obtain a username and password. Winlogon also creates a unique local group for this user that it assigns to this instance of the desktop (keyboard, screen, and mouse). Winlogon passes this group to Lsass as part of the LsaLogonUser call. If the user is successfully logged on, this group will be included in the logon process token—a step that protects access to the desktop. For example, another user logging on to the same account but on a different system will be unable to write to the first user's desktop because this second user won't be in the first user's group.

The MSV1_0 authentication package takes the username and a hashed version of the password and sends a request to the local SAM to retrieve the account information, which includes the password, the groups to which the user belongs, and any account restrictions. MSV1_0 first checks the account restrictions, such as hours or type of accesses allowed. If the user can't log on because of the restrictions in the SAM database, the logon call fails and MSV1_0 returns a failure status to the LSA.

MSV1_0 then compares the hashed password and username to that stored by the SAM. In the case of a cached domain logon, MSV1_0 accesses the cached information by using Lsass functions that store and retrieve "secrets" from the LSA database (the SECURITY hive of the registry). If the information matches, MSV1_0 generates an LUID for the logon session and creates the logon session by calling Lsass, associating this unique identifier with the session and passing the information needed to ultimately create an access token for the user. (Recall that an access token includes the user's SID; group SIDs; and user profile information, such as home directory.)

After validating hashed username and password information with Active Directory's user account objects (using the Active Directory server - \Winnt\ System32\Ntdsa.dll), Kdcsvc returns domain credentials to Lsass, which returns the result of the authentication and the user's domain logon credentials (if the logon was successful) across the network to the system where the logon is taking place.

After a logon has been authenticated, Lsass looks in the local policy database for the user's allowed access—interactive, network, or service process. If the requested logon doesn't match the allowed access, the logon attempt will be terminated. Lsass deletes the newly created logon session by cleaning up any of its data structures and then returns failure to Winlogon, which in turn displays an appropriate message to the user. If the requested access is allowed, Lsass adds any additional security IDs (such as Everyone, Interactive, and the like). It then checks its policy database for any granted privileges for all the IDs for this user and adds these privileges to the user's access token.

When Lsass has accumulated all the necessary information, it calls the executive to create the access token. The executive creates a primary access token for an interactive or a service logon and an impersonation token for a network logon. After the access token is successfully created, Lsass duplicates the token, creating a handle that can be passed to Winlogon, and closes its own handle. If necessary, the logon operation is audited. At this point, Lsass returns success to Winlogon along with a handle to the access token, the LUID for the logon session, and the profile information, if any, that the authentication package returned.

Winlogon then looks in the registry at the value HKLM\SOFTWARE\Microsoft\Windows NT\Current Version\Winlogon\Userinit and creates a process to run whatever the value of that string is. (This value can be several .exes separated by commas.) The default value is Userinit.exe, which loads the user profile and then creates a process to run whatever the value is of HKLM\SOFTWARE\Microsoft\Windows NT\Current Version\Winlogon\Shell, which defaults to Explorer.exe. Userinit then exits (which is why Explorer.exe shows up as having no parent when examined with commands such as tlist /t).