The object manager can generate audit events as a result of an access check, and Win32 functions available to user applications can generate them directly. Kernel-mode code is always allowed to generate an audit event. Two privileges, SeSecurityPrivilege and SeAuditPrivilege, relate to auditing. A process must have the SeSecurityPrivilege privilege to manage the security Event Log and to view or set an object's SACL. Processes that call audit system services, however, must have the SeAuditPrivilege privilege to successfully generate an audit record.

The audit policy of the local system controls the decision to audit a particular type of security event. The audit policy, also called the local security policy, is one part of the security policy Lsass maintains on the local system. Lsass sends messages to the SRM to inform it of the auditing policy at system initialization time and when the policy changes. Lsass is responsible for receiving audit records generated based on the audit events from the SRM, editing the records, and sending them to the Event Logger. Lsass (instead of the SRM) sends these records because it adds pertinent details, such as the information needed to more completely identify the process that is being audited. 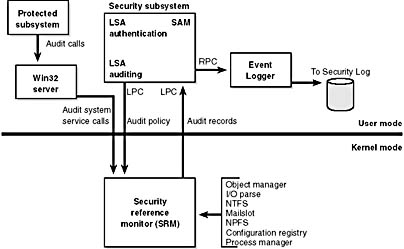 Figure 8-7 brings together the concepts covered so far in this chapter by illustrating the basic process and thread security structures. In the figure, notice that the process object and the thread objects have ACLs, as do the access-token objects themselves. Also in this figure, thread 2 and thread 3 each has an impersonation token, whereas thread 1 defaults to the process access token. 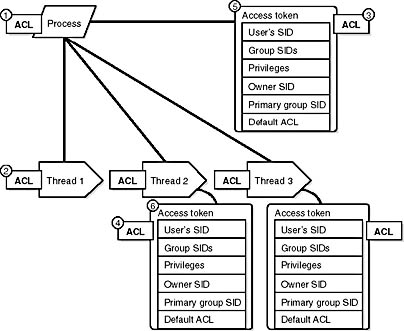 You can view process and thread security descriptors and access tokens with the Process Explode utility (Pview.exe). (This tool is part of the Windows NT 4 resource kits, but it isn't included with the Windows 2000 resource kit tools. You can, however, download it from www.reskit.com.) The numbering of the six buttons in the Security and Token sections of the Process Explode utility matches up with the process and thread security structures shown in Figure 8-7. 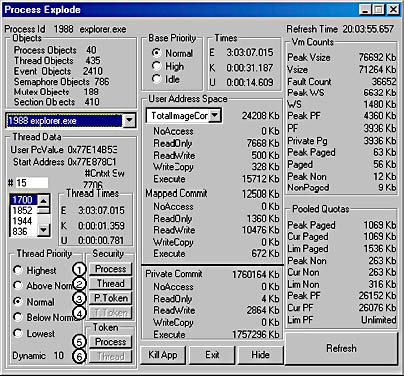 In this example, buttons 4 (ACL for thread token) and 6 (thread access token) are grayed out (disabled) because the currently selected thread (number 1700) has no thread-specific access token.

Try looking at the process ACL for a process in your interactive session—you should see your user ID and SYSTEM in the ACL with full control permissions.

To see process security in action, try the following:

The following steps don't work on Windows 2000 server systems that have Terminal Services installed. The reason they don't work in this context is explained after step 10.

The reason that steps 8 through 10 don't work on a system with Terminal Services installed is because the steps rely on the fact that, on systems without Terminal Services, Task Manager uses the TerminateProcess function to end processes. However, when you direct Task Manager to end a process on a system running in a Terminal Services environment, Task Manager calls on Termsrv.exe, the terminal services service, to perform the process termination. Because Termsrv.exe is a service process running in the System account, it has the debug privilege, which it uses to open a process it's terminating without regard to the process's token or process security settings.