Each of these components is covered in more detail later in the chapter.

Like all other components of the Windows 2000 executive, the memory manager is fully reentrant and supports simultaneous execution on multiprocessor systems—that is, it allows two threads to acquire resources in such a way that they don't corrupt each other's data. To accomplish the goal of being fully reentrant, the memory manager uses several different internal synchronization mechanisms to control access to its own internal data structures, such as spinlocks and executive resources. (Synchronization objects are discussed in Chapter 3.)

Systemwide resources to which the memory manager must synchronize access include the page frame number (PFN) database (controlled by a spinlock), section objects and the system working set (controlled by executive resources), and page file creation (controlled by a mutex), as well as other internal structures. Per-process memory management data structures are synchronized using two per-process mutexes: the working set lock (held while changes are being made to the working set list) and the address space lock (held whenever the address space is being changed).

Like most of Windows 2000, the memory manager attempts to automatically provide optimal system performance for varying workloads on systems of varying sizes and types. You can use registry values under the key HKLM\SYSTEM\CurrentControlSet\Control\Session Manager\Memory Management to override these default performance calculations. Some of these values are listed in Table 7-1. For more details, see the Windows 2000 resource kit Technical Reference to the Registry help file.

Most of the interesting "knobs" or controls that affect memory manager policy are kernel variables that contain various thresholds and limits computed at system boot time on the basis of memory size and product type (Windows 2000 Professional being optimized for desktop interactive use and Windows 2000 Server systems for running server applications). Examples of these knobs include the sizing of system memory (paged pool, nonpaged pool, system cache, number of system page table entries), page read cluster size, counters that trigger working set trimming, and thresholds for the modified page writer. To find some of these, search for global variables in Ntoskrnl.exe that have names beginning with Mm that contain the word "maximum" or "minimum."

WARNING Although you'll find references to many of these knobs, you shouldn't change them. Windows 2000 has been tested to operate properly with the current possible permutations of these values that can be computed. Changing the value of these kernel variables on a running system can result in unpredictable system behavior, including system hangs or even crashes.

The current memory sizes that determine whether Windows 2000 considers a system to have a small, medium, or large amount of memory are listed in Table 7-2. The memory manager uses this value in many of its boot-time calculations.

Because device drivers (as well as other Windows 2000 kernel-mode components) might make resource allocation and run-time policy decisions based on memory size values, the following kernel-mode routines have been provided (and are documented in the DDK):

The Memory and Process performance counter objects provide access to most of the details about system and process memory utilization. Throughout the chapter, we'll include references to specific performance counters that contain information related to the component being described.

Besides the Performance tool, a number of tools in the Windows 2000 Support Tools and Windows 2000 resource kits display different subsets of memory usage information. We've included relevant examples and experiments throughout the chapter. One word of caution, however—different utilities use varying and sometimes inconsistent or confusing names when displaying memory information. The following experiment illustrates this point. (We'll explain the terms used in this example in subsequent sections.) 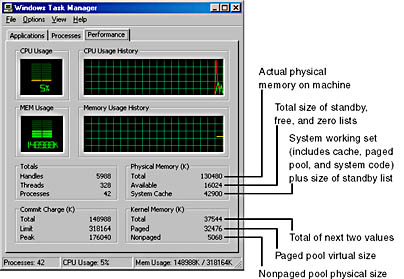 Both Pmon.exe (in the Windows 2000 Support Tools) and Pstat.exe (in the Platform SDK) display system and process memory information. The annotations in the following output from Pstat explain the information reported. (For an explanation of the commit total and limit, see Table 7-8.) 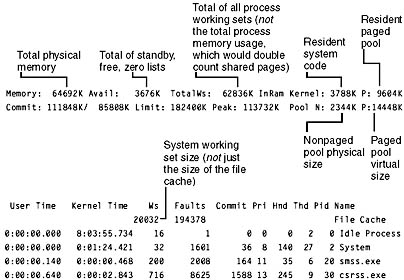 To see the specific usage of paged and nonpaged pool, use the Poolmon utility, described in the experiment.

Finally, the !vm command in the kernel debugger shows the basic memory management information available through the memory-related performance counters. This command can be useful if you're looking at a crash dump or hung system. Here's an example of its output:

EXPERIMENT Accounting for Physical Memory Use

Your graph or report now contains a representation of all of physical memory except for two components that you can't obtain from a performance counter:

Although you can easily obtain the size of both the modified and modified-no-write lists by using the kernel debugger !memusage command, there's no easy way to get the size of the nonpaged operating system and driver code. You can, however, get the amount of physical memory being used by nonpaged and paged operating system and device driver code by using the kernel debugger !drivers 1 command and the total of the Resident column. This column represents the number of pages that physically reside in each loaded kernel-mode module.