On Windows 2000, the NDIS library (\Winnt\System32\Drivers\Ndis.sys) implements the NDIS boundary that exists between TDI transports (typically) and NDIS drivers. As is Tdi.sys, the NDIS library is a helper library that NDIS driver clients use to format commands they send to NDIS drivers. NDIS drivers interface with the library to receive requests and send back responses. Figure 13-18 shows the relationship between various NDIS-related components. 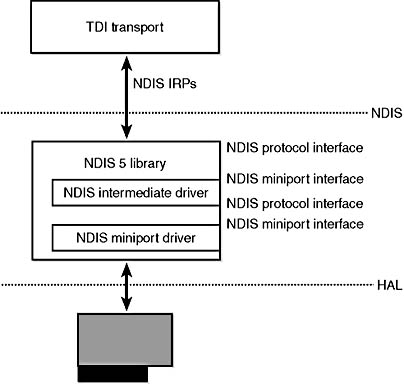 The interfaces that the NDIS library provides for NDIS drivers to interface with network adapter hardware are available via functions that translate directly to corresponding functions in the HAL.

The Flags field for the miniport that was examined indicates that the miniport supports deserialized operation (DESERIALIZED), that the media is currently active (MEDIA_CONNECTED), and that it is an NDIS 5 miniport driver (NDIS_5_0). Also listed are the adapter's system-to-device power-state mappings and the bus resources that the Plug and Play manager assigned to the adapter. (See the section "The Power Manager" in Chapter 9 for more information on power-state mappings.)

Variations on the NDIS Miniport

Figure 13-19 shows the relationships between these components. 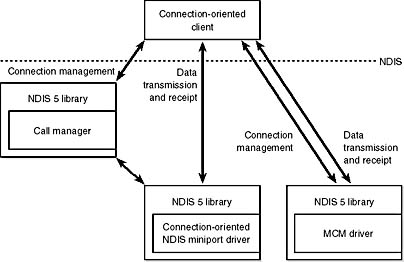 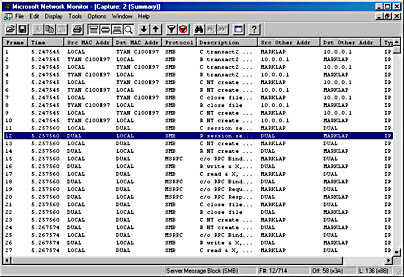 The screen shot shows the SMB (CIFS) packets that Network Monitor captured as remote files were accessed from the system. If you double-click on a line, Network Monitor will switch to a view of the packet that breaks it apart to show various layered application and protocol headers as shown in the following screen shot: 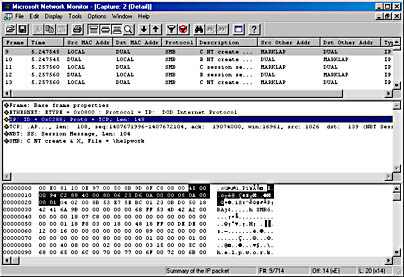 Network Monitor also includes a number of other features, such as capture triggers and filters, that make it a powerful tool for troubleshooting network problems.