The final piece in the Windows 2000 networking architecture puzzle is the way in which the components at the various layers—networking API layer, TDI transport driver layer, NDIS driver layer—locate one another. The name of the process that connects the layers is binding. You've witnessed binding taking place if you've changed your network configuration by adding or removing a component using Network Properties.

When you install a networking component, you must supply an INF file for the component. (INF files are described in Chapter 9.) This file includes directions that setup API routines must follow to install and configure the component, including binding dependencies or binding relationships. A developer can specify binding dependencies for a proprietary component so that the SCM will not only load the component in the correct order but will also load the component only if other components the proprietary component depends on are present on the system. Binding relationships, which the bind engine determines with the aid of additional information in a component's INF file, establish connections between components at the various layers. The connections specify which components a network component on one layer can use on the layer beneath it.

For example, the Workstation service (redirector) will automatically bind to the NBF (NetBEUI) and TCP/IP protocols if they are both present on a system. The order of the binding, which you can examine on the Adapters And Bindings tab in the Advanced Settings dialog box, shown in Figure 13-20, determines the priority of the binding. (See the section "Network-Resource Name Resolution" for instructions on how to launch the Advanced Settings dialog box.) When the redirector receives a request to access a remote file, it submits the request to both protocol drivers simultaneously. When the response comes, the redirector waits until it has also received responses from any higher-priority protocol drivers. Only then will the redirector return the result to the caller. Thus, it can be advantageous to reorder bindings so that bindings of high priority are also the most performance efficient or applicable to most of the computers in your network. You can also manually remove bindings with the Advanced Settings dialog box. 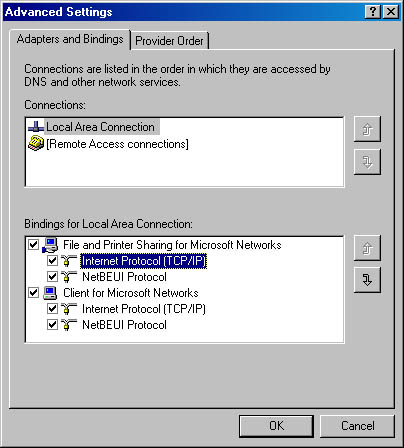