Networking API drivers must take API requests and translate them into low-level network protocol requests for transmission across the network. The API drivers rely on transport protocol drivers in kernel mode to do the actual translation. Separating APIs from underlying protocols gives the networking architecture the flexibility of letting each API use a number of different protocols. The protocol drivers that Windows 2000 includes are Data Link Control (DLC), NetBEUI, TCP/IP, and NWLink, although other protocols might be present as options, such as the AppleTalk protocol installed with Services For Macintosh on Windows 2000 servers. Here's a brief description of each protocol:

So that networking API drivers don't need to employ various interfaces for each transport protocol they might want to use, Microsoft established the Transport Driver Interface (TDI) standard. As mentioned earlier in this chapter, a TDI interface is essentially a convention for the way network requests format into IRPs and for the way network addresses and communications are allocated. Transport protocols that adhere to the TDI standard export the TDI interface to their clients, which include networking API drivers such as AFD and the redirector. A transport protocol implemented as a Windows 2000 device driver is known as a TDI transport. Because TDI transports are device drivers, they format requests they receive from clients as IRPs.

Support functions in the \Winnt\System32\Drivers\Tdi.sys library, along with definitions developers include in their drivers, make up the TDI interface. The TDI programming model is very similar to that of Winsock. A TDI client executes the following steps to establish a connection with a remote server:

TDI also supports connectionless communications for connectionless protocols such as UDP. In addition, TDI provides a means whereby a TDI client can register event callbacks (that is, functions that are directly invoked) with TDI transports. When it receives data from across the network, a TDI transport can invoke a registered client receive callback, for example. This event-based callback feature of TDI allows the TDI transport to notify its clients of network events, and clients that rely on event callbacks don't need to preallocate resources such as buffers when receiving network data because they can view the contents of the buffers supplied by a TDI protocol driver.

TDImon, a utility included on the companion CD as \Sysint\Tdimon.exe, is a form of filter driver that attaches to the \Device\Tcp and \Device\Udp device objects that the TCP/IP driver creates. After attaching, TDImon sees every IRP that TDI clients issue to these protocols. By intercepting TDI client event callback registration, it also monitors event callbacks. The TDImon driver sends information about the TDI activity for display in its GUI, where you can see the time of an operation, the type of TDI activity that took place, the local and remote addresses of a TCP connection or the local address of a UDP endpoint, the resulting status code of the IRP or event callback, and additional information such as the number of bytes sent or received. Here's a screen shot of TDImon watching the TDI activity that is generated when Microsoft Internet Explorer browses a Web page: 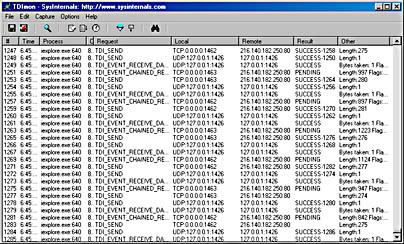