Working through a Simple Problem

Take a look at the PurchaseOrderHeader table from the AdventureWorks sample database. This table stores the header of sales orders, such as Date, Total, Buyer, and so on. It does not contain the individual items, which are stored in a separate table. 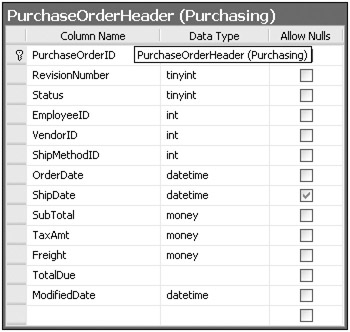 Suppose that you need to calculate the average value of every purchase order made by a given customer. The query might look something like the following code. You can access this sample code from the sample files as \Ch09\Samples01.sql.

This is the result:

The number 23 in the code above is the CustomerID. For other customers, you would supply their CustomerID instead of 23.

You might want to discover the average purchase of a customer when given the customer name. The Sales.Store table contains a Name column and a CustomerID column. You can obtain the CustomerID for a given name by using the following query. 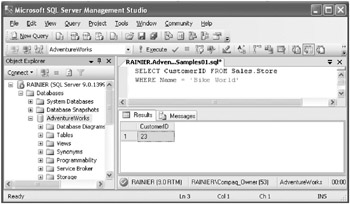 Given the CustomerID, you can use the previous query to find the average purchase amount. The two queries can be combined in the following statement. 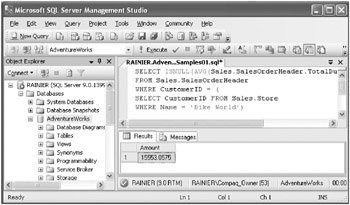 Note that Bike World is a customer name. Notice that the first three lines of this query are similar to those found in the first block of code above. What if you could put the common functionality in a single location? By doing this, you could not only reuse this piece of code, but you could easily change it everywhere it is reused by altering only one location.

A scalar UDF is similar to what most programming languages call a function. It can accept parameters, execute logic, and return data. The returned data must be a scalar type, that is, a string, number, or date value. It cannot be a table or a cursor. A scalar UDF can be used anywhere that a built-in SQL Server function is allowed, and it must also be deterministic.

The general syntax for defining a scalar UDF is:

In this case, you will define the function as follows on the next page. You can access this sample code from the sample files as \Ch09\Samples02.sql.

This function will accept a CustomerID and return the average purchase amount for that customer. You can easily call that function from SQL Server Management Studio, as shown below. 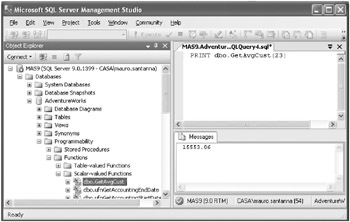 You can also use the function in more complicated scenarios. To retrieve the average purchase amount when given the customer name, you can use the following query. 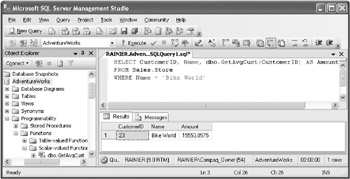 The UDF can be used repeatedly. For instance, suppose that you want the customer names of those whose purchase orders average more than $100,000. You can write a simple query, such as the following: 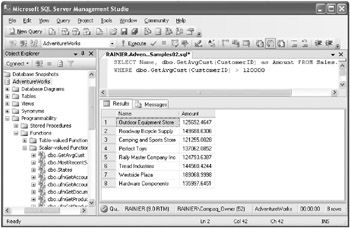 In the example presented in the previous section, you reused a query that accepted a parameter and returned a scalar value (a money type, in our example). You may need similar solutions when you want to define something resembling a parameterized view, that is, a view that varies depending on a parameter. Suppose that you want to separate the orders that are larger than a certain value. You can write a query against the Sales.SalesOrderHeader table as shown below. You can access this sample code from the sample files as \Ch09\Samples03.sql. 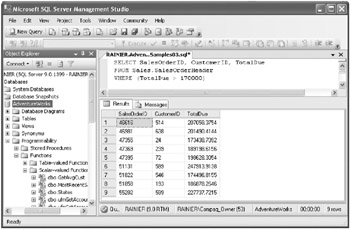 If you want to use that query over and over again in different scenarios, you might choose to create another type of UDF: an in-line UDF.

Think of the in-line UDF as a parameterized SELECT query or a parameterized view. This type of UDF carries some restrictions: because it can only contain a single SELECT statement within it, it therefore cannot be very complicated. It can accept parameters, but cannot change the state of the database. The general format of an in-line UDF is:

Referring back to the example used in the previous section, you can wrap the query inside an in-line UDF with the following code.

Once defined, you can use the in-line UDF with parameters as if it were a table, as presented in the following code. 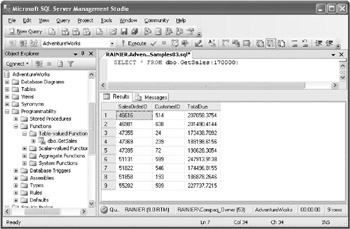 The in-line UDF can also be combined with other tables, such as in a JOIN clause. 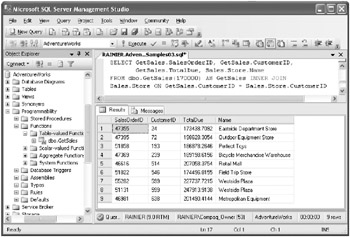 In-line UDFs work well if all of the code you wish to write is contained in a single SELECT statement. However, you cannot write complex code inside an in-line UDF, and the return type is limited by the schema of the SELECT query that you use.

Assume that you need a table with the compound interest accrued over a period of time. The number of periods is variable, as are the interest rates. For instance, for twelve periods at 1 percent per period, the table would look like the following figure. 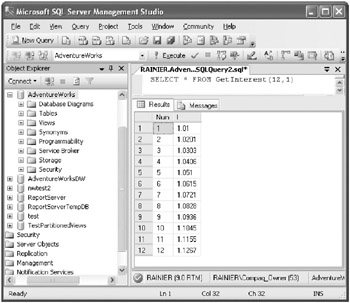 You can generate such a table in many ways. It could be created as an array inside the application. You might instead prefer to create a database table because it is easy to create reports based on database tables or because you need to join the table with other database tables. Using a database table, however, poses some of the following problems.

You may mitigate the problem by utilizing temporary tables (each user would have her own copy), but you would still need to know when to populate the table and call the specific code.

A table-valued UDF is a UDF that can return a table. Since you define the tables schema inside the function itself, the table does not need to be based on other database tables.

The interest rate table provides a good example. Just like a scalar UDF, it can contain multiple statements. The following is the general format of a table-valued UDF.

The code below returns the interest table for our example. You can access this sample code from the sample files as \Ch09\Samples04.sql.

A table-valued UDF is an excellent alternative to a view because it accepts parameters and may contain several complex statements, while a view can only contain a single SQL Server statement.

The table-valued UDF can be used as a table. For instance, to generate a dataset with ten time periods at 6 percent interest per period, you would use: 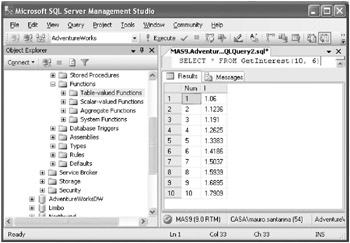 Now suppose that you want to determine the future value of your biggest sales (above $200,000) over the next three years using an interest rate of 8 percent per year. The query used to obtain your sales over $200,000 is: 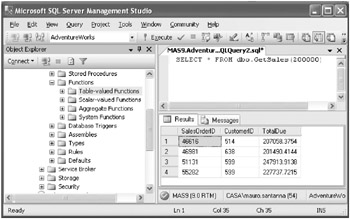 You can join this query with another that returns the interest rate. 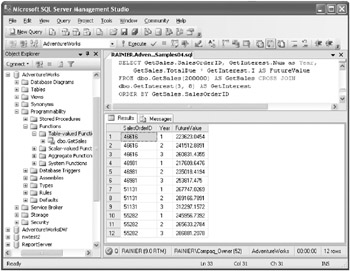 You cannot use a UDF to insert data into a table. Although a UDF can query the database since it is by definition deterministic, it cannot change the database. If you want to update the database, you must use a slightly different method: a stored procedure.

A stored procedure is a small program that runs inside the database server. One reason to write a stored procedure is because some programs are easier to write directly in the database server using T-SQL rather than going back and forth between the application and the server. Consider this simple situation: You have created a database table to store city names and states, as shown below.

The following script is written to create the table. You can access the sample code from the sample files as \Ch09\Samples05.sql.

The following VisualBasic.NET/ADO.NET code is written to accomplish this insertion routine. Do not be concerned if you are not familiar with Visual Basic. The point being illustrated here is that a great deal of work is necessary to accomplish such a simple task. This function is included in the sample files as \Ch09\InsertCityQ.vb.

The following script creates a stored procedure that accomplishes the same result.

The T-SQL code is much simpler to write for several reasons.

This example calls the stored procedure from Visual Basic.NET code. This code is included in the sample files as \Ch09\InsertCitySP.vb.

You can use stored procedures for almost any database operation. For instance, you could write a stored procedure to update the Cities table when given the primary key and modified city and state values.

You can execute this stored procedure using the following syntax:

This stored procedure deletes a line from the table when given its primary key.

You can execute this stored procedure using the following syntax:

The following stored procedure retrieves all of the cities in a specific state and returns the result set.

Stored procedures and UDFs are programs that run in the database server. Both can be used to return values and result sets. However, this is where their similarities end. The main differences between the two types of server programs are detailed in Table 9-1.