Being able to create HTML and ASP files is only the first step; step two involves getting your files onto a web server. Many people use third-party FTP clients to upload the files to the server. In addition to the third-party software it is also possible to actually FTP files from within Microsoft Access. There are several ways to do this.

Those of you with the Office 2002 Developers edition can use an ActiveX Control called the Internet Transfer Control. This control allows you to perform simple file transfer using FTP or HTTP protocols.

However, a pure Microsoft Access approach is also available. Dev Anish and Terry Craft have made a free addin available which will permit you to transfer files to the Internet without the use of ActiveX controls. This feature has the advantage that, when distributing your database, you do not need to worry about ActiveX controls on the user PC. You simply include the FTP library with your database and set a reference to it. This is discussed in Chapter 13. We have included both the database and the library files on the book CD ( FTP2002 is the MDB file, and InetTransferLib the library file containing the required modules. Further information is available from The Access Web site at http://www.mvps.org/access/ . A ReadMe file has also been included which provides some examples of usage. The library exposes two objects: HTTP which is used to download from the server, and FTP which is used to both upload and download files. Note that some default FTP and HTTP clients have been added to the code in the example database. You will need to change these in order to get the tool to function. 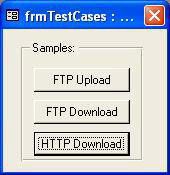 Using the library is a straightforward process, but make sure you view the ReadMe file for more information and instructions on providing this functionality in your own database. Make sure you set a reference to the MDA library file before actually trying it out.

Try it outUsing the FTP Database to Download a File

Before anything else let's install the files.

How to Use Hyperlinks

If you've looked at the Company table, then you've already seen a hyperlink field:

As you can see this field is designed to hold the web address of the companies and, because the field is a hyperlink, clicking on the field will launch your web browser to point at this web site.

You can see that the Hyperlink column type is extremely useful, as it gives you, and your users, quick access to web pages and mail addresses. If you want to hide even more complexity from your users you can use the display part of the hyperlink to show different text. Rather than delete and retype the hyperlink, let's edit it in a different way.

With your mouse over the e-mail address column, click the right mouse button and select Hyperlink , and then Edit Hyperlink from the next menu. This brings up the Edit Hyperlink window: 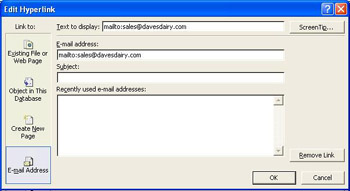 If you now change the Text to display field and press the OK button, you'll see that what's displayed in the column is now the text you typed in, rather than the e-mail address.

You've seen how easy it is to use hyperlinks in tables, but you might be wondering how you can use them in your code. The Hyperlink data type is more like an object, with several properties and methods :

You've seen the Edit Hyperlink dialog, which allows all of the values for a hyperlink to be edited, but you may not want your users using this form. After all, it looks fairly confusing and has more information than the user will require. This process, creating a new form, simplifies the process for the end user. Let's make a more user-friendly form for editing hyperlinks.

So with just a few lines of code, you've made a simpler form for editing hyperlinks and made the link a lot more readable.

You've seen forms being opened before, but this format does require a little explanation. The last two arguments are the ones we're interested in. The arguments specified by the commas tell Access to simply use the default argument. DoCmd.OpenForm takes the following arguments: FormName , View , FilterName , WhereCondition , DataMode , WindowMode , OpenArgs . acDialog tells Access that the form is to be opened modally, as though it were a dialog form that means that you have to close the form before you can continue. The last argument is a string that gets passed into the hyperlink form, and is used to identify which control we are editing the hyperlink for.

Let's now look at the code for the hyperlink form. Firstly there's a global variable, m_ctlHyperlink , which is a Control . This will point to the actual control on the calling form this will be either the Email or Web address control.

Now for the Form_Load procedure. Firstly we set this global variable to point to the control on the previous form. We're using a special variable called OpenArgs here this contains the value that was passed in as the last argument of the OpenForm command shown earlier. In this case it's the name of a control, so we can use this to index into the forms Controls collection:

Now we want to display the various parts of the hyperlink on our form. For this we refer to the Hyperlink property of the control, which allows us to access the various hyperlink elements.

When the user presses the OK button we want to be able to update the hyperlink control. We can't use the Hyperlink property and its elements as we did when the form was opened because the individual elements are read-only, but we can combine the elements together, using the hash symbol to separate them.

The Clear button simply clears the values from the form fields. This saves the user having to clear them individually.

The last piece of code is for the Test button, when we want to launch the application associated with the hyperlink. For this we use the Follow method of the Hyperlink property.

That's all there is to it! An easier form, with only a few lines of code. Although we've only shown this code working for the e-mail address, it works the same way for Web addresses. Why not try adding some real Web URLs to see it in action?