Manipulating Controls on the Form

Adding Controls to the Form

Listing 6-4: Adding Buttons to the Form

Line 01 activates the window containing Form1.vb. Although it would be the active window because it was just added to the project, this line demonstrates how to make any window the active window.

Line 06 creates a pointer object to the WinForms Designer object. This object is an instance of the IDesignerHost interface. IDesignerHost provides an interface for managing designer transactions and components. It is used here for adding components or, in this case, controls to the form.

Lines 09 and 13 dimension two command buttons for placement on the form. They are dimensioned as IComponent objects. IComponent provides functionality required by all components and facilitates the creation of the components that you are placing on the form. Line 10 demonstrates how to display the name of the form currently pointed to by the IDesignerHost object, fdHost. It is not used in the automation process and is provided simply for demonstration purposes.

Lines 11 and 14 actually create the two buttons and place them on the form, using the CreateComponent method of the IDesignerHost object. CreateComponent creates a component of the specified type and adds it to the design document. In this case, calling the fdHost.GetType method specifies the type of Windows Forms button. At this point, the buttons are created but not yet placed on the form. Line 16 creates a parent object as PropertyDescriptor for placement of the buttons on the form. This line uses the TypeDescriptor.GetProperties overloaded method. In this case, the method gets the collection of properties for a specified type of component (Button) using a specified array of attributes as a filter.

Lines 18 and 19 place the created buttons on the form. Next, the ListComponents function is called to display the components in a message box.

While the message box is displayed, you can view the buttons on the form, as shown in Figure 6-3. There is only one problem here: Visual Studio initially loads all controls at the same place on a form. Therefore, you will see that only one of the buttons is visible. This is due to the fact that one button is overlaying the other button. 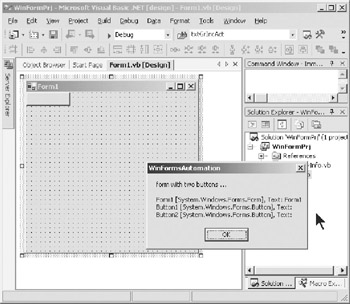 Figure 6-3: Buttons placed on the form

You can query the PropertyDescriptorCollection collection about its contents by using the properties available in the PropertyDescriptorCollection class. You can use the Count property to determine the number of elements in the collection. Use the Item property to get a specific property by index number or by name. The Item property is the default property and therefore is assumed in the code in Listing 6-5.

Executing the MsgBox will display the default size of the btn1 component as it was sized when placed on the form. 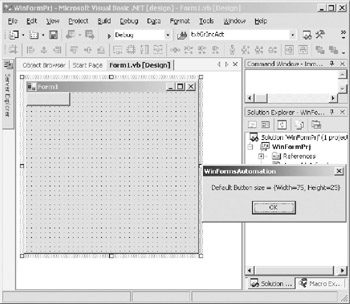 Now that you've placed two controls on the form, you'll now resize and reposition the controls.