The simplest and most widely used message topology, point-to-point is the fundamental building block for other message topologies. Simply stated, the point-to-point topology is one sender exchanging messages with one receiver. As you saw in the preceding section, this message exchange can be described by a datagram, request-reply, or duplex MEP.

In my opinion, datagram point-to-point is the most interesting topology, but it is also the hardest to implement. In essence, the forward-only point-to-point topology is a chain of datagram messages sent to different participants. It is important to note that this topology is composed of datagram MEPs only. It is possible for a message to return to a participant, but this must be explicitly stated in the address of the message, rather than implied, as it often is in the Request-Reply MEP. In general, this topology relies heavily on the <From>, <ReplyTo>, <FaultTo>, <RelatesTo>, <MessageID>, and <To> WS-Addressing header blocks.

As the development community embraces messaging applications, it will become more and more important to broker the messaging interactions between these applications. A similar need appeared when the Internet and e-commerce started to gain popularity. The prototypical example from this era is a load balancer in a server farm. Among other things, a load balancer directs traffic to available resources. Over time, load balancers have become more and more intelligent, and this trend shows no sign of slowing down. I expect the same sort of evolution to happen in the world of service-oriented applications.

In general terms, a broker is a messaging participant that forwards messages to other endpoints. The broker can use a set of processing rules to determine when, where, and how messages are forwarded to other participants. A brokered topology can be further categorized to include distributed brokering, centralized brokering, or hybrid brokering. These brokering topologies are similar to the various e-mail server topologies in use today. 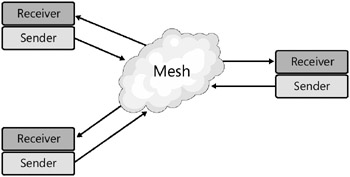