Another set of insights from the computer industry helps us to understand the patterns of evolution in supply chain structures. In the 1970s and the early 1980s the computer industry's structure was decidedly vertical (Grove 1996). The three largest companies, IBM, Digital Equipment Corporation (DEC), and Hewlett-Packard, were highly integrated, as was the second tier of computer makers. Companies tended to provide most of the key elements of their own computer systems, from the operating system and applications software to the peripherals and electronic hardware, rather than sourcing bundles of subsystem modules acquired from third parties.

In this era, products and systems typically exhibited closed, integral architectures. That is, there was little or no interchangeability across different companies' systems. DEC peripherals and software, for example, did not work in IBM machines, and vice versa—so each company maintained technological competencies across many elements in the chain.

IBM had significant market power during that time and was very profitable. By holding to its closed product architecture, the company kept existing customers hostage—any competing machine they bought would be incompatible with their IBMs (Baldwin and Clark 1999). At the same time, Big Blue emphasized the value of its overall systems-and-service package, determined to stave off competitors who might offer better performance on one or another piece of the package.

In the late 1970s, IBM faced a challenge from upstart Apple Computer. IBM's competitive response, the PC, catalyzed a dramatic change throughout the industry, which quickly moved from a vertical to a horizontal structure. The dominant product was no longer the IBM computer, but the IBM-compatible computer. The modular architecture encouraged companies large and small to enter the fray and supply subsystems for the industry: semiconductors, circuit boards, applications software, peripherals, network services, and PC design and assembly.

A single product/supply chain decision (by a dominant producer) triggered a momentous structural shift—from a vertical/integral industry structure to a horizontal/modular one (Grove 1996, 40). The universal availability of the Intel and Microsoft subsystems led dozens of entrepreneurs to enter the personal computer business with IBM-compatibles. The modular (mix-and-match) architecture created significant competition within each segment of the horizontally structured industry.

In this industry, so recently organized along monolithic, vertical lines, there now appeared a spate of separate sub-industries—not only for microprocessors and operating systems, but for peripherals, software, network services, and so on. Within each of the categories, new businesses emerged, making it easier and easier for a computer maker to shop around for just the right combination of subsystems.

On balance, this spread of competition was a healthy development for the industry and for computer buyers, but certainly not for IBM shareholders, who saw their company lose about $100 billion in market value between 1986 and 1992 (Baldwin and Clark 1999). Some observers have speculated that this model of horizontal/modular competition, which also evolved in telecommunications during the 1990s, might be the new (and permanent) industrial structure for many industries. However, further examination suggests that the horizontal/modular structure may also prove to be quite unstable—as unstable as the vertical/integral structures that give birth to them.

Why might the horizontal/modular supply chain structure be short-lived? Let's look again at the fruit flies in the PC industry.

Modular industry and supply chain structures tend to create fierce, commodity like competition within individual niches. Such competition keeps the players highly focused on their survival. However, over time, a shakeout typically occurs, and stronger players—those that manage to develop an edge in costs, quality, technology, or service, for example—drive out weaker ones. Once a firm is large enough to exert some market power in its segment, it sees the opportunity to expand vertically as well. Microsoft and Intel, each of which came to dominate its respective segment, have exhibited this behavior. Intel expanded from microprocessors to design and assembly of motherboard modules, making significant inroads into an arena typically controlled by the systems assemblers such as Compaq, Dell, and IBM. In addition, with each new microprocessor generation, Intel added more functions on the chip (functions that applications software suppliers traditionally offered), thereby making incursions into the software applications segment as well (Joglekar 1996).

In the case of Microsoft, dominance in PC operating systems has led to the company's entry into applications software, network services, Web browsers, server operating systems, and multi-media content development and delivery. In short, Microsoft looks a little bit more each day like the old IBM—attempting to dominate increasingly large slices of the overall industry and earning monopoly-like profits in the process. Microsoft's ability to integrate across the segments is particularly vivid (to both competitors and regulators) because its market share is so large and information technology is so flexible.

The computer industry of the 1980s and 1990s therefore illustrates an entire cycle of supply chain structure evolution (figure 9.1). Consider the dynamic forces at work: When the industry structure is vertical and the product architecture is integral, the forces of disintegration push toward a horizontal and modular configuration. These forces include: 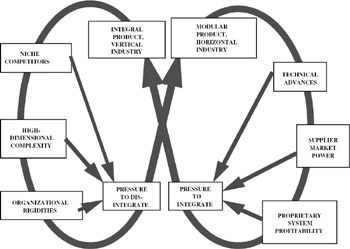 Figure 9.1: The Double Helix Illustrates the Oscillation in Supply Chain Structure between Vertical/integral and Horizontal/modular (Fine and Whitney 1996)

These forces typically weaken the vertical giant and create pressure toward disintegration to a more horizontal, modular structure. IBM, it might be argued, had all these forces lined up against it: Constant pressure from niche entrants, particularly in software and peripherals; competitors who took the lead in some technological segments (Intel's invention of the microprocessor, for example); and the many layers of bureaucracy that grew up as IBM expanded its headcount to almost a half million employees at its peak in the 1980s.

On the other hand, when an industry supply chain has a horizontal/modular structure, another set of forces push toward more vertical integration and integral product architectures. These forces include:

We therefore learn another important lesson about the evolution of supply chain structures: They should not be expected to be stable. Instead one should expect supply chain structures to cycle between integral/vertical and horizontal/modular forms. Furthermore, the speed with which the structures cycle is influenced by the clockspeed of the industry. In the computer industry, less than two decades transpired before a full cycle had come to completion. In the auto industry, however, the current modularization trends are closing a cycle begun in the first decade of this century.