Let's take a look now at how the entire licensing process works. The exact process that takes place is different depending on whether the Terminal Server is configured to use device-based or user-based TS CALs.

When a Terminal Server is configured to use TS Device CALs (Start | Administrative Tools | Terminal Services Configuration | Server Settings | Licensing), each client device needs to have its own license.

An unlicensed client device will always be granted a temporary 90-day TS CAL at the time of its first connection. Only after successful authentication and a second logon is the temporary TS CAL upgraded to a full TS CAL. This two-stage licensing process is used to ensure that TS CALs are only assigned to authenticated users. Previously (before hotfix 287687 or Windows 2000 Service Pack 3) any user that connected was assigned a full TS CAL, even if he did not belong on the system. The full TS CAL certificate was granted at connection time, before the logon screen even popped up. If a user thought, "Oops, I don't belong on this system!" it was too late—his client device had already received a full TS CAL certificate, even if the administrator never meant for him to access the system. This circumstance often led to license servers running out of TS CALs.

Anyone who has been in the computer industry for more than five minutes can probably spot a potential flaw in this plan. Client devices tend to break. Windows-based terminals have their ROMs reflashed. Operating systems are reinstalled on workstations. PCs are reimaged. Whenever this happens, the TS CAL digital certificate stored on the client device is lost forever. The TS CAL doesn't exist on the license server after it's transferred to a client device. When that client connects back to a Terminal Server, it has no digital certificate to present. The server thinks that it has no license, and instructs the license server to issue a new TS CAL in the form of a new digital certificate. In effect, that one client device ends up consuming two TS CALs—the old one that was lost and the new one that was just issued. If the client device were reset again, a third TS CAL would be used.

In Windows 2003 (and Windows 2000 SP3), when a Terminal Server requests a TS CAL from the license server for a client device, a full TS CAL certificate is granted with an expiration date randomly selected between 52 and 89 days from the current date. The license server keeps track of the expiration date and it is also embedded into the digital certificate that represents the actual license passed down to the client device.

The license server also tracks the expiration date of TS CALs. If for some reason the client's CAL is never renewed and expires, the license server returns that TS CAL to the inventory of available unused licenses. If a client device with a TS CAL were to blow up or be rebuilt, the license server would automatically add the TS CAL back into its available license pool after it expired (a maximum of 89 days).

If the Terminal Server is not able to obtain a TS CAL renewal when the client device's TS CAL certificate expires after the 52 to 89 days, the client is denied access. A temporary 90-day certificate cannot replace a full certificate that has expired, but this shouldn't ever be a problem for you (unless you don't have enough TS CALs).

True geeks will enjoy tracing the entire licensing flow in Windows 2003 Terminal Server environments in Figure 4.4 on the facing page. 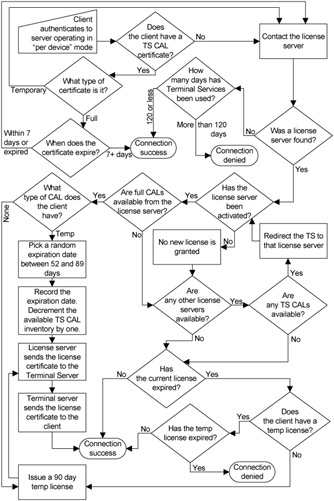 Throughout this license distribution and acquisition process, we have discussed two different license timeframes. While both are related to Windows 2003 Terminal Services licensing, they are actually completely different.

From a legal standpoint, you must have a valid TS CAL for each client device that connects to a Terminal Server, even during the first 120 days. The 120-day threshold is not a free evaluation period. Rather, it gives you a chance to set up your Terminal Server environment and get the bugs worked out before you activate your license server.

How did this come to be? When Windows 2003 was in beta testing, Microsoft was planning to offer a "per processor" licensing model. At the last minute (with Release Candidate 2), Microsoft changed its mind and decided to go with a "per user" option instead. This decision was a popular move on Microsoft's part. The only problem was that it was so late in the game that Microsoft didn't have time to build the "per user" technical license compliance infrastructure (although you can bet we'll see it in future versions of Windows).