To view how your IPSec policies and rules are being used in your network, you may want to monitor IPSec. In this lesson, you use several tools to do just that. You focus on IPSec monitoring tools like IPSECMON.EXE, Event Viewer, Performance Monitor, and Network Monitor. These tools help you to maintain a secure, IPSec-rich network.

Windows 2000 provides tools that you can use to manage, monitor, and troubleshoot IPSec. This section provides an overview of these tools. 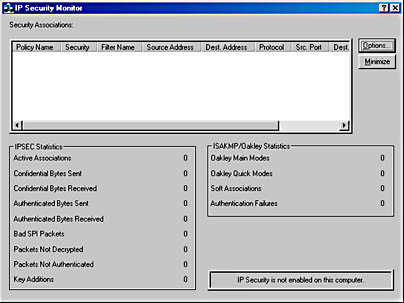 Performance Monitor includes the following IPSec objects and counters that can be examined:

These related events can also be recorded and then later analyzed in Event Viewer.

Network Monitor version 2.0 contains parsers for IPSec packets. If IPSec is encrypting the packets, the contents are not visible, but the packet itself is. If only authentication is being used, the entire packet, including its contents, will be visible. ESP is displayed as IP protocol number 50 (decimal) and AH IS displayed as 51 (decimal). ISAKMP/Oakley is displayed as UDP port number 500 (decimal).

The ESP data itself is not readable because of the encryption.

Do the entire practice on both computers. This exercise is done one computer at a time.

IPSec has created an ICV from the IP, ICMP, and Data fields of the frame. By doing this, IPSec prevents someone from capturing the data, altering it, and resending the bad data. When you look at the Hex pane you can still see the 32 characters sent in the ping. By configuring the AH security method, you ensure authentication but do not encrypt the data in the packet. AH just makes sure that the packet data, as well as most parts of the IP header, such as source and destination IP addresses, are not modified. Next you will look at packets using the ESP security method that will encrypt the data part of the IP packet.

In this practice, you use Network Monitor to set ESP encryption and view encrypted packets.

Before you can view the encrypted packets (not the content itself), you need to set the ESP encryption.

Once ESP encryption is enabled, you can use Network Monitor to capture and view the ESP packets.

In this practice, you use the IPSec Monitor diagnostic aid to verify that IPSec is active and to view the active SAs.

Windows 2000 Server contains a monitoring tool for IPSec called IPSecmon. Run this tool to see active security associations, "soft" or "hard," on the local or remote machines. It does not show failed SAs or other filters.

Click Start, point to Run, then type ipsecmon [computer name]. For each soft or hard SA, you see one line in the white box. The column on the left titled Policy Name is the name of the policy that had been assigned and enforced on the computer. The Negotiation Policy column is actually the specific security method that was agreed to during the negotiation. An attempt is made to resolve the IP addresses for source and destination to DNS names.

There are a number of global statistics to note that have accumulated since the computer was last started:

Exercise 1: Verifying that IPSec is Active and Viewing the Active SAs

Windows 2000 Server has several tools that can be used to manage and troubleshoot IPSec. There is an IPSec Security Policy Management snap-in for MMC that allows you to create and edit policies. IPSec Security Monitor allows you measure a variety of IPSec statistics which can be used to determine the efficiency and security of your network. And Network Monitor can be used to view encrypted packets. These tools allow you to monitor and troubleshoot IPSec communications on your network.