In this paper, we discuss the problem of fusing multiple feature streams enjoying spatio-temporal support in different modalities. We present a hierarchical fusion model (see Figure 2.8), which makes use of late integration of intermediate decisions.

To solve the problem we propose a Hierarchical duration dependent input output Markov model. There are four main considerations that have led us to the particular choice of the fusion architecture.

Figure 2.7 shows the temporally rolled out Hierarchical model. This model takes as input, data from multiple sensors, which in the case of videos reduces to two streams Audio and Video. Figure 2.8 shows these two streams with one referring to audio features or observations AO1,.,AO T and the other to video features VO1,.,VO T. The media information represented by these features is modeled using hidden Markov models which here are referred to as media HMM as these are used to model each media. Each state in the media HMMs represents a stationary distribution and by using the Viterbi decoder over each feature stream, we essentially cluster features spatio-temporally and quantize them through state identities. State-sequence-based processing using trained HMMs can be thought of as a form of guided spatio-temporal vector quantization for reducing the dimensionality of the feature vectors from multiple streams [13]. 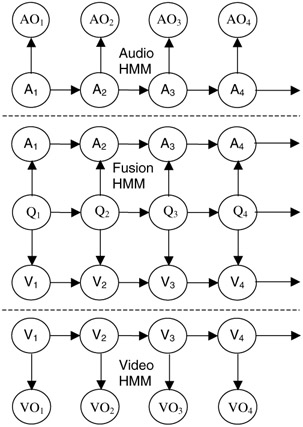 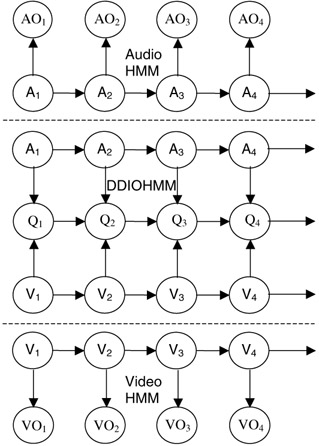 Figure 2.8: Hierarchical multimedia fusion. The media HMMs are responsible for mapping media observations to state sequences. The fusion model, which lies between the dotted lines, uses these state sequences as inputs and maps them to output decision sequences.

corresponding to time instants t=1,.,T . Consider two hypotheses Hi, i∈ {0,1} corresponding to the presence and absence of an event E in the feature stream. Under each hypothesis we assume that the feature stream is generated by a hidden Markov model [26] (the parameters of the HMM under each hypothesis are learned using the EM algorithm [26]). Maximum likelihood detection is used to detect the underlying hypothesis for a given sequence of features observed and then the corresponding hidden state sequence is obtained by using the Viterbi decoding (explained later). Once the state sequence for each feature stream is obtained, we can use these intermediate-level decisions from that feature stream [13] in a hierarchical approach.

Hierarchical models use these state sequences to do the inferencing. Figure 7 shows the fusion model, where standard HMM is used for fusing the different modalities. However this model has many limitations - it assumes the different streams are independent for a particular concept and models a exponentially decaying distribution for a particular event, which as discussed is not true in general.

Figure 2.8 illustrates in Hierarchical structure that uses DDIOMM. DDIOMM helps us to get around these, providing a more suitable fusion architecture. It is discussed in more detail in the next section.

Consider a sequence γ of symbols y1,.,y T where yi∈{1,.,N}. Consider another sequence Q of symbols q1,.,q T, where qi∈{1,.,M}. The model between the dotted lines in Figure 2.8 illustrates a Bayesian network involving these two sequences. Here y={A,V} (i.e., Cartesian product of the audio and video sequence). This network can be thought of as a mapping of the input sequence γ to the output sequence Q. We term this network the Input Output Markov Model. This network is close in spirit to the input output hidden Markov model [47].

The transition in the output sequence is initially assumed to be Markovian. This leads to an exponential duration density model. Let us define A={Aijk}, i,j∈{1,.,M}, k ∈{1,.,N} as the map. Aijk=P(qt=j|qt-1=i,yt=k) is estimated from the training data through frequency counting and tells us the probability of the current decision state given the current input symbol and the previous state. Once A is estimated, we can then predict the output sequence Q, given the input sequence γ using Viterbi decoding.

The algorithm for decoding the decision is presented below.

Qt indicates all possible decision sequences until time t-1. Then this can be recursively represented. 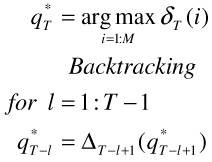 In the above algorithm, we have allowed the density of the duration of each decision state to be exponential. This may not be a valid assumption. To rectify this we now introduce the duration dependent input output Markov model (DDIOMM). Our approach in modeling duration in the DDIOMM is similar to that by Ramesh et al. [48].

This model, in its standard form, assumes that the probability of staying in a particular state decays exponentially with time. However, most audio-visual events have finite duration not conforming to the exponential density. Ramesh et al. [48] have shown that results can improve by specifically modeling the duration of staying in different states. In our current work, we show how one can enforce it in case of models like duration dependent IOMM.

where Qt indicates all possible decision sequences until time t-1 and dt(i) indicates the duration in terms of discrete time samples for which the path has continued to be in the state qt. This can be recursively computed as follows

Using the above equations, one can decode the hidden state sequence. Each state or the group of states correspond to the state of the environment or the particular semantic concept that is being modeled. In the next section, we compare the performance of these models with the traditional HMMs and show that one can get huge improvements.