Currently, voice and data traffic are treated separately in wireless networks such as GSM (Global Special Mobile) [1] and GPRS (General Packet Radio Service) [2] systems. The Release 1 definition of third generation (3G) wireless systems also kept this separation. Wireless voice traffic is routed through the circuit-switched infrastructure whereas data traffic is routed through the packet network. To explain this integration, we look to GPRS integration in the existing GSM network. As shown in Figure 7.1, two new GPRS dedicated nodes, SGSN (Serving GPRS Support Node) and GGSN (Gateway GPRS Support Node), are added in the existing GSM network. An SGSN is responsible for the delivery of data packets to and from the mobile station within its service area. Its tasks include packet routing and transfer, mobility management (attach/detach and location management), logical link management, and the authentication and charging functions. The location register of the SGSN stores the location information and user profiles of all GPRS users registered within the SGSN. GGSN acts as an interface between the GPRS backbone and the external packet data networks. It converts GPRS packets coming from the SGSN into appropriate PDP (Packet Data Protocol) format and sends them out on the corresponding packet data network. In the other direction, the PDP addresses of incoming data packets are converted to the GSM addresses of the destination. The addressed packets are sent to the responsible SGSN. For this purpose the SGSN stores the current SGSN address of the user and the user's profile in its location register. GGSN also performs the authentication and charging function. 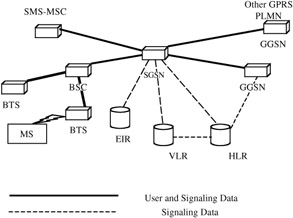 Although wireless and Internet technologies perform quite well within their own domains, the integration of wireless links into the Internet exhibits considerable challenges. Unpredictability in the air-link conditions, such as rapid fading, shadowing, and intermittent disconnection, affect the radio link performance, and the frame error rate (FER) can be as high as 10-1. This causes serious quality degradation to the data users. Packet traffic is very sensitive to the bit error rate (BER). To overcome the higher BER problem, the Wireless Air Interface Protocol has included the definition of a new protocol layer, RLP (Radio Link Protocol), on top of the MAC (medium access control) layer. The RLP layer brings higher reliability on the wireless link by using the ARQ (automatic repeat request) retransmission technique in conjunction with the cyclic redundancy check (CRC).

The signaling for VoIP should be able to gracefully migrate into the existing infrastructure to converge voice and data networks. Existing GSM voice networks and terminals use SS7 (Signaling System 7) and ISDN (Integrated Signaling Digital Network) protocols. The International Telecommunications Union (ITU) has defined H.323 [3] as the key protocol that implements this migration to today's PSTN (public switched telephone network) signaling domain. New protocols such as SIP (Session Initiation Protocol), [4] MGCP (Media Gateway Control Protocol), [5] and H.248 [6] have been proposed recently to implement VoIP services to overcome the limitations of H.323 through gateway decomposition.

SIP, as defined by the IETF (Internet Engineering Task Force), is a signaling protocol for telephone calls over the Internet. Unlike H.323, SIP was specifically defined for the Internet and includes mobility management functions. It exploits the manageability of IP and makes telephony applications development relatively simple. It is basically used for setting up, controlling, and tearing down sessions on the Internet that include telephone calls and multimedia conferences. SIP supports various facets of telecommunications such as user location, user capabilities, user availability, call setup, and call handling.

In our view, multiple VoIP protocols will exist and interact among themselves for the foreseeable future. For our study in this chapter, we have considered H.323 and SIP as the protocols of choice for VoIP services implementation. The proposed analysis, although based on H.323 implementation, is general in nature and can be easily extended to SIP.

The introduction of VoIP service introduces new impediments because the IP network, as shown in Figure 7.2, replaces the network between the two ends. The previous assumption of negligible jitter in the synchronous digital network is no longer valid because of the packet-handling process in the best-effort IP network that will introduce variable amounts of delay between the subsequent packets. This variability must be eliminated at the destination so that the voice packets are offered to the decoder at a constant rate. To achieve this, the receiving end uses a dejitter buffer to delay packets so that all the packets are offered at a constant rate. To compensate for the high degree of network delay variability, the setting of the buffer delay can be high, thus introducing additional delay on the voice path. To reduce this delay jitter, the Internet is introducing new service types, such as Diff-Serv (differentiated service) [7] and MPLS (multiprotocol label switching), [8] to maintain the performance of VoIP traffic within only a small delay jitter tolerance.

Wireless VoIP introduces additional impediments within the network due to wireless data links in the access. In GSM and CDMA systems today, digitized voice packets are transmitted over wireless links without an ARQ-type protocol. Thus, if there is an error in the voice packets, the system accepts the packet or drops it. Voice quality is not significantly affected by this mechanism. Although the FER (frame error rate) in wireless access links can be as high as 10-1 to 10-3, voice quality degradation is not significant. But for data communication, no channel error is acceptable unless it is protected by error correction code. To overcome channel error, the ARQ protocol is used to retransmit the erroneous packets. This retransmission currently happens at the TCP level because the original design of the IP protocol considered a very low error probability on the channel. Application of TCP retransmission for error correction in wireless networks only will significantly slow down the wireless link throughput and increase delay. To overcome this delay and throughput problem, MAC layer retransmission is considered for wireless data links. Wireless data access standards, such as GPRS and cdma2000, use MAC layer retransmission, called RLC/MAC, which causes additional delay jitter for wireless VoIP packets.