4.3 The Challenges of Mobile Networks

4.3 The Challenges of Mobile Networks

In a fixed IP environment such as the Internet, the main obstacles for achieving a good QoS are packet losses and delays. Losses are mainly caused by congestion in the routers along the end-to-end path between the streaming server and the streaming client. If a router is congested, it starts to drop packets. These packets are normally not retransmitted by the network protocols, unless ad hoc retransmission techniques are used at the application layer or reliable transport protocols as employed. Delays may depend on congestion issues, out-of-sequence packet reordering and on the physical capacity of the network trunks between streaming server and client. A variable delay over time is called jitter. Whenever the inter-arrival time of the media packets at the streaming client is variable, delay jitter occurs. Normally, a good buffer management at the streaming client would help in de-jittering the incoming data flow.

In a mobile network environment some new factors must be considered:

In this section we will describe the suitable mobile channels for multimedia streaming. There are essentially two types of connections that allow streaming: circuit-switched and packet-switched connections.

HSCSD is a technology derived by the GSM (Global System for Mobile Communications) standard, and defined in the GSM Release '96 specifications. The limit of GSM networks in terms of capacity is 9.6 kbps. This speed is suitable for voice calls and nonreal-time data connections at very low bit rates, such as Web access. The minimum capacity requirement of a multimedia streaming application of acceptable quality is about 20 kbps (i.e., considering 5 kbps of audio and 15 kbps for video at four frames per second).

An HSCSD network is an enhancement of the GSM network. The basic idea is to allow one user to simultaneously allocate several TDMA (Time Division Multiple Access) time slots of a carrier. To achieve this, a new functionality is introduced in the network and mobile station (MS) for splitting and combining data into several data streams, which will then be transferred via n (n = 1,2,...,8) channels over the radio interface. Once split, the data streams are carried by the n full-rate traffic channels as if they were independent of each other, up to the point in the network where they are combined (see Figure 4.2). [2]

The data rate of a single time slot can be increased up to 14.4 kbps by puncturing (i.e., by deleting) certain error correction bits of the existing 9.6 kbps. In theory, up to 8 time slots can be allocated at the same time; therefore, the available user bit rate could be as high as 115.2 kbps (8 14.4 kbps). In practice, however, the maximum bit rate per user is limited to 64 kbps, because only one ISDN B-channel is reserved per user in the A interface of GSM network infrastructure. [3] Table 4.1 summarizes the possible bit rates achievable in uplink and downlink with HSCSD networks.

HSCSD has both transparent and nontransparent types of services. Transparent mode offers error protection at the channel coding level only. In this mode retransmission of packets hit by errors is not used. As a result, the bit rate and network delay are constant, [4] but the BER is variable (up to 10-3), depending on the channel condition. Nontransparent mode offers retransmission of erroneous frames, using the GSM Radio Link Protocol (RLP) (see Figure 4.3), [5] in addition to error correction made by channel coding. Typical BER values in nontransparent mode are less than 10-6. The available throughput and transmission delay vary with the channel quality (the higher the BER, the lower the throughput and the higher the network delay). Typical delay values range from 400 milliseconds up to 1 second in case of mobile-to-mobile connections. [6]

ECSD is a network technology defined within EDGE in Release '99 specifications, and it has the same principle as HSCSD. The fundamental enhancement consists of a new modulation technique used in the air interface. This modulation is called 8-PSK (octagonal Phase Shift Keying) and it triples the data rate per time slot. However, the limitation of the A interface to 64 kbps is always in place. Table 4.2 summarizes the bit rates achievable with ECSD (in addition to those available with HSCSD). [8]

GPRS networks introduce the concept of packet data in Release '97 specifications. Packet data is suitable for applications that exploit a bursty traffic, for which it is not needed to allocate a circuit-switched channel permanently, but resources are allocated from a common pool. The access time to GPRS networks is lower, and charging is done based on traffic volumes.

A great advantage of GPRS networks is that they are built to support packet-switched traffic based on IP and X.25 protocols. In this way, it is easy to connect GPRS networks to IP-based backbones, such as the public Internet. Figure 4.4 shows the GPRS protocol stack for the user plane. [9]

A GPRS MS can use up to eight channels or time slots (TS), that are dynamically allocated separately for downlink and uplink when there is traffic to be transferred. The allocation depends on the resource availability. In GPRS, different channel coding schemes are defined in the radio interface. They are named CS-1, CS-2, CS-3, and CS-4, and offer decreasing error protection. Depending on the number of time slots and the coding scheme used, the maximum bit rate achievable with GPRS networks can be as high as 171.2 kbps, as shown in Table 4.3.

The SNDCP (SubNetwork Dependent Convergence Protocol) [11] layer provides TCP/IP header compression [12] and V.42 bis [13] data compression to enhance the capacity of the network. SNDCP allows a reduction of the packet header size from 40 to 3 bytes.

GPRS introduces the concept of QoS profile for a PDP context. A QoS profile defines a set of attributes that characterize the expected quality of the connection. These attributes are described in Table 4.4. [14], [15], [16], [17], [18], [19] For real-time traffic, such as multimedia streaming traffic, the QoS profile must be set with appropriate combination of values, in order to guarantee the best user QoS. It must be noted that the throughput values can be renegotiated by the network at any time.

The E-GPRS coding schemes support incremental redundancy (IR), which is a physical layer performance enhancement for the RLC acknowledged mode of layer 2. Whenever a request for a retransmission is triggered by the RLC protocol, the IR mechanism dynamically adjusts the code rate to the actual channel conditions by incrementally redundant information, until the reception of the lost RLC block is successful. This effectively increases the probability of data reception at the RLC peer entity. [21] This feature is a great benefit in nonconversational real-time applications, such as mobile multimedia streaming.

In E-GPRS, bit rates can be increased up to 473.6 kbps, as illustrated in Table 4.8, which shows the bit rates for different combinations of time slots and coding schemes.

Another improvement offered by E-GPRS is the TCP and UDP (over IPv4 and IPv6) header compression capability in the SNDCP layer. This allows the packet headers to reduce from a maximum size of 60 to 4 bytes. [22]

The QoS profile for E-GPRS is essentially similar to that for UTRAN. Please refer to the information provided in Tables 4.9, 4.10, and in the next section.

The IMT-2000 specifications for 3G networks are written by 3GPP, which has defined standards for UMTS networks. The air interface technology for UMTS is W-CDMA (Wideband Code Division Multiple Access). The main objectives and features for UMTS networks can be summarized as:

3GPP has gone through different releases of the UTRAN specifications, namely Release '99, Release 4, and Release 5. At the time of writing this chapter, the Release 6 specifications were in the process of being defined. UTRAN networks offer both circuit-switched and packet-switched services. Release 5 specifications define the IP Multimedia Subsystem (IMS) [23] in the Core Network (CN) that makes all-IP networks a reality. IMS is based on the Session Initiation Protocol (SIP) defined in the IETF (Internet Engineering Task Force). [24], [25], [26] IMS in the CN enables more Internet-based multimedia services that are not available in the Release 4 CN.

Figure 4.5 shows the user plane protocol stack for UTRAN networks. [27] Between the MS and the UTRAN, the RLC Protocol can operate in transparent, unacknowledged, and acknowledged modes. In transparent mode no protocol overhead is added to the higher layer data, while in unacknowledged and acknowledged modes a certain RLC layer overhead is added (sequence numbers, length indication, and other information). Acknowledged mode is suitable for a mobile multimedia streaming application, because it provides retransmissions of the lost blocks. Retransmission can be configured in the RLC protocol in different ways: [28]

The PDCP (Packet Data Convergence Protocol) layer [29] is located immediately below the IP layer, and it exists only for services from the packet-switched domain. Its main functionality is that of compressing higher-layer protocol headers for the purpose of reducing the bit rate toward the radio interface. For Release '99 networks the compression algorithm is the same as the one included in the E-GPRS specifications, [30] while from Release 4 onward the ROHC (Robust Header Compression) algorithm [31] is supported also to compress RTP/UDP/IP or UDP/IP (under IPv4 or IPv6 environment) headers from a maximum of 60 to 3 bytes. In the PDCP, differently than the SNDCP layer in GPRS, no data compression is supported. The reason for this choice is to achieve a higher protocol speed, and also because many types of data encapsulated using the Real-Time Transport Protocol (RTP) are already compressed (speech, audio, video, images), making a second compression step unnecessary.

To guarantee end-to-end quality of service, the UMTS specifications define a new, important parameter: the traffic class. This is considered as a fundamental way to distinguish services of different types and their respective quality. Table 4.9 summarizes the four traffic classes defined for UMTS networks. [32] The practical differences between the four classes is in terms of delay and error rates. While conversational and streaming classes guarantee low delays at the cost of higher error rates, interactive and background traffic classes guarantee lower error rates at the cost of higher delays.

The QoS profile for an UMTS PDP context is defined in a slightly different way compared to the GPRS QoS profile. Table 4.10 contains the QoS profile attributes and values for the streaming traffic class. [33]

The rules to map UMTS and GPRS Release '97 QoS profile attributes (and vice versa) are not described here, but they are available (see reference [34]).

GERAN networks in Release 5 specifications originate from the possibility of integrating UMTS and GSM/EDGE network technologies to provide more benefits to the end users. The two technologies have many things in common; for example, UMTS has adopted most of the functionalities of the GSM/EDGE networks. On the other hand, GERAN has adopted the Iu interface, which is the same interface between UTRAN and CN. The Iu interface enables the interfacing to UTRAN networks, allowing also the provisioning of the same IMS services as UTRAN. GERAN also makes use of the Gb and A interfaces to communicate with GSM/EDGE networks at the maximum speed of 473.6 kbps. GERAN implements a separation of radio-related and nonradio-related functionalities. For example, one operator could run a CN and deploy the same services using two different radio technologies seamlessly (e.g., W-CDMA, GSM/EDGE, WLAN).

One of the peculiarities of UTRAN and GERAN is the fact that their protocol stacks are aligned. Figure 4.6 shows the GERAN user plane protocol stack. [35] 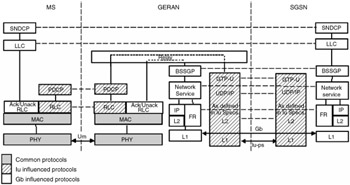 In this architecture, the SNDCP and LLC protocols of E-GPRS are replaced by the PDCP layer, when communicating through the Iu interface. One of the features standardized in GERAN is the capability to efficiently handle RTP/UDP/IP traffic by using header compression [36] or header removal in the PDCP layer.

The RLC layer is similar to the one defined for UTRAN, but also it can benefit from incremental redundancy of E-GPRS. All the other protocol details are similar to those for UTRAN. The same is valid for the QoS profile parameters.