The specifications for PSS in Release 4 are basically defined in two documents. [37], [38] Here we describe the main features and architecture of a mobile streaming service that is implemented according to Release 4 specifications. No details on the file formats for PSS are included in this chapter.

Figure 4.7 shows the end-to-end architecture for PSS service. [39] In this architecture only content servers and streaming clients are required. The dashed elements may not be present. The content server resides behind the Gi interface, possibly within the operator's network. However, streaming servers also may reside on the public Internet. Content cache servers can be used for service optimization, and may keep the replicated copies of the most-popular items streamed by the users. Portals servers are engines that allow an easier access facility to the end user, often through the use of searching and browsing capabilities. User and terminal profile servers store user preferences and terminal capabilities data that can be used to control the streaming session to the end user. 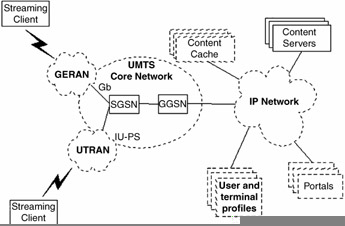 While a streaming server can be designed primarily for use over the Internet and also serve mobile streaming users, eventually in an nonoptimized fashion, a streaming client must be designed merely for mobile use. A system view of a Release 4 PSS client is shown in Figure 4.8, [40] while the protocol stack for layer 3 and above is shown in Figure 4.9. [41] A PSS client can be either extended or simple, depending on whether or not it implements the functional components in the dashed blocks (vector graphics and capability exchange). The features for extended PSS clients have been defined in Release 5 specifications. 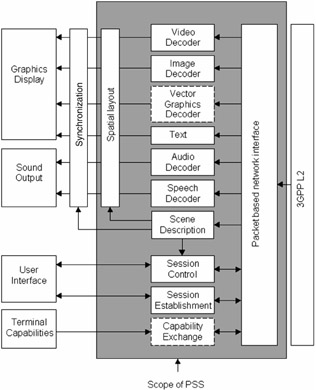 The scene description component consists of spatial layout of the different media and the description of the temporal relationship (i.e., synchronization) of the media that is included in a media presentation.

3GPP PSS can support a rich set of media, either continuous or discrete. Continuous media are media flows that must be displayed/played preserving their temporal relationship. They are transported via RTP/UDP/IP packet encapsulation, using appropriate payload formats defined for each codec. Discrete media have no time element among their properties. They are transported using HTTP/TCP/IP packet encapsulation.

Continuous media in Release 4 PSS are speech, audio, and video. The following decoders can be supported in a streaming client:

Discrete media in Release 4 PSS are still images, bitmap graphics, vector graphics, and text. The following discrete media decoders can be supported in a streaming client:

The specifications for Release 5 PSS are defined in three documents. [65], [66], [67] Release 5 enhances PSS with new features. The major features are described here (file format issues will not be covered here).

The most important enhancement of the application control plane is a new mechanism for capability exchange, which means the functionality of PSS servers to provide content for a wide set of mobile devices. The device capabilities and preferences are described in a device profile using attributes into an RDF [68] document that follows the structure of the CC/PP [69] framework and the CC/PP application, UAProf. [70] Following are some of the possible attributes that can characterize a mobile device:

Whenever this mechanism for capability negotiation is used, device capability profiles are stored on a device profile server that is inquired by a PSS server (via HTTP or RTSP) before delivering multimedia content to the mobile device.

The new media formats that are introduced in Release 5 of PSS specifications are all of the discrete type (i.e., transport over HTTP/TCP/IP):

This section discussed the main features of PSS in Release 4 and Release 5 specifications. The next section covers some QoS and performance issues of mobile multimedia streaming.