This section introduces an experimental study we have conducted in order to assess the effectiveness of our proposed musical services. We carried out several experiments (about 4000) consisting in the download of either a set of MP3-type songs or a set of different karaoke clips, according to the selected service. During the experimentation of the song-on-demand distribution service, four different replicated Web servers were exploited at the Internet side as song repositories, which were dispersed throughout the world; for the mobile karaoke service, we used three different replica servers that were located within a metropolitan scenario.

The communication between the IS and the mobile client was simulated by means of an UMTS simulator which was able to produce the transmission delay time of each frame at the UMTS radio link layer. Detailed information concerning the experimental models we adopted for our experiments are discussed in the following sections.

Currently, no real measurements of UMTS wireless data are available; hence, in our experiments the communication between the IS system (on the Internet side) and the mobile client application was carried out through a simulated UMTS network (running the background traffic class). To this aim, a UMTS simulator provided by the Fondazione Marconi (an Italian public foundation for wireless computing) was exploited. The UMTS network simulator we used was able to return Wireless Network Transmission Time (WNTT) values after simulations, i.e., the time spent to download musical resources, as computed at the UMTS radio link control (RLC) layer.

The simulated transmission of an IP packet over an air interface is illustrated in Figure 24.7. The RLC layer received a PDCP frame composed of an IP data packet to which various headers were added for each different level of the protocol stack (indeed, the PDCP layer was not simulated, for the sake of simplicity). 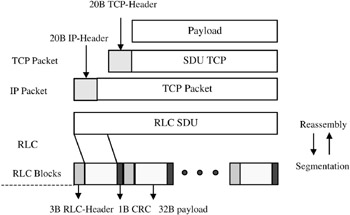 Figure 24.7: Segmentation of an IP packet into RLC data blocks.

We conducted experiments with IP packets of different sizes (160, 480, and 960 bytes) coming from the Internet. The resulting PDCP frames were then segmented into RLC data blocks, each of which was 36 bytes. The result of this segmentation activity at the RLC level was that 5, 15, and 30 RLC data blocks were needed to transmit IP packets with the dimensions of 160, 480, and 960 bytes, respectively. In summary, if the transmission slot was available, 10, 30, and 60 milliseconds were needed to transmit over the air interface IP packets with the dimensions of 160, 480, and 960 bytes, respectively. It goes without saying that the obtained WNTT values depended on some operational parameters, such as the amount of traffic present in the simulated cell, the number of active clients and their speeds. WNTT measurements included the time spent for possible retransmissions at the RLC level.

To circumvent this problem, our experiments included the possible retransmission time delays incurred at the TCP level obtained by exploiting an external delay management mechanism. This external delay management mechanism was designed to take into account the typical TCP error recovery method based on received ACKs. Simply put, the delay mechanism compared the WNTT values obtained through the UMTS simulation against the time out values computed by TCP. If the simulated WNTT value was larger than the correspondent TCP time out value, then a retransmission must have occurred at the TCP level. In such a case, the WNTT value of that particular TCP segment was augmented by an additional value chosen as equal to the next WNTT value extracted from the set of the UMTS-based simulated values. Consequently, the TCP time out value was updated as follows: If a retransmission at the TCP level was detected according to the method mentioned previously, then the subsequent TCP time out value was calculated as the double of the previously computed value. If no retransmission at the TCP level was detected, then the traditional adaptive formula for the calculation of the TCP timeout value, as proposed by Jacobson, was followed. [20]

The next section presents the two different measurement architectures (along with obtained results) we adopted on the Internet side to evaluate the song-on-demand distribution service and the mobile karaoke service we have implemented.

To evaluate the efficacy of the song-on-demand distribution service we have developed, we used four different Web servers, geographically distributed over the Internet, providing the same set of 40 different songs. The four replica servers were located in Finland, Japan, the United States, and New Zealand (see Figure 24.8). Our designed intermediate system, located in Bologna, Italy, was running over a Pentium 3 machine (667 MHz, 254 MB RAM) equipped with the Windows 2000 Server operating system. The UMTS device, on which the client of our application was running, was emulated by means of a Pentium 2 computer (266 MHz, 128 MB RAM) equipped with the Windows CE operating system. 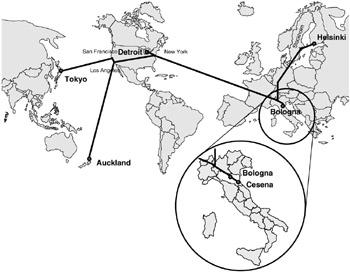 In order to provide the reader with an approximate idea of the transmission times experienced over the considered Internet links, it is worth mentioning that the round trip times (RTTs), obtained with the ping routine, between the client and the four servers measured 70 (Finland), 393 (Japan), 145 (United States) and 491 (New Zealand) milliseconds. As far as the downloading process is concerned, we took two basic assumptions:

For the sake of brevity, in this chapter we only report the results obtained for the download of single songs. If interested, you may refer to the work of Roccetti and cowokers [21], [22] for further details on the results we obtained when song compilations were downloaded.

In the following, we report on a large set of results obtained during many experimental trials based on the previously mentioned models.

In particular, we begin by presenting the measurements we obtained for our wireless application on the Internet side. In essence, Wireline Network Transmission Time (WLNTT) values refer to the time spent over the wired Internet links to download a requested song from the replicated Web servers toward the IS on the Internet side. These measurements have been compared with those that may be obtained by downloading the same MP3-based song with a standard HTTP GET method. The first row of Table 24.1 reports those results for MP3 files whose size is 5 MB. The second row shows the average WLNTT percentage improvement obtained by our system that exploits the previously mentioned C2LD mechanism, with respect to the standard HTTP protocol. As shown in the table, our system obtains an average percentage improvement over the fastest HTTP replica, which is equal to 32 percent.

As already mentioned, Wireless Network Transmission Time (WNTT) values refer to the time spent for downloading songs to the mobile devices through the wireless links. (It is worth remembering that these values have been obtained through UMTS simulations.) Figures 24.9 and 24.10 show the WNTT values for 5 MB- and 3 MB-sized songs, depending on the following traffic parameters:

In addition, it is worth noting that the WNTT values we have plotted have been obtained by averaging all the experiments conducted with IP packets of different dimensions (i.e., 160, 480, and 960 bytes). The main considerations that derive from an analysis of the results presented in Figures 24.9 and 24.10 are (1) the larger the traffic in the cell (and the users' speed), the larger the corresponding WNTT values, and (2) the best WNTT result may be obtained when the mobile device is completely still. (In such a case, a data rate of about 12 KBps may be obtained.) Additionally, it is worth noting the impact that the download time values, obtained on the Internet side, have on the total time requested to download songs on UMTS terminals. The obtained average download delays on the Internet side (about 33 seconds) seem to be quite irrelevant if compared with the WNTT values that have been experienced on the wireless links (ranging from 250 to 1325 seconds, i.e., from about 4 to 22 minutes). This optimal result on the Internet side is probably due to the use of the adopted Web replication technology along with the use of our distribution mechanism (C2LD). Note that if we try to download songs from a single Web server (such as the New Zealand Web server) with the standard HTTP, this can lead to an increase of the WLNTT value by about 600 seconds (10 minutes).

To evaluate the efficacy of the mobile karaoke distribution service we have implemented, three different Web replica servers were used. They all maintained the same set of karaoke clips, along with the associated multimedia resources. As shown in the small picture of Figure 24.8, out of these three Web servers, two were located on the same LAN at the Department of Computer Science of the University of Bologna (a 100-Mbps Ethernet). The third server and the IS system were deployed on a different 100-Mbps Ethernet LAN, located at a remote site of the University of Bologna (the Computer Science Laboratory of Cesena). The two LANs were approximately 10 hops each from other, interconnected through a 34-Mbps link. The IS application was running over a Pentium 3 machine (800 MHz, 512 MB RAM) equipped with the Windows 2000 Professional operating system. Finally, the client side of our mobile application was emulated on a Pentium 3 machine (667 MHz, 512 MB RAM) equipped with the Microsoft Pocket PC operating system emulator. (It is worth mentioning that the round trip times, obtained with the ping routine, between the emulated client and the three Web servers measured about 10 milliseconds on average.)

As far as the downloading process is concerned, we took the following basic assumptions:

Much-larger values were measured for the WNTT results experienced over the wireless link. As in the case of simple song distribution, those measurements were taken depending on the two traffic parameters: (1) the speed at which users moved through the cell, and (2) the additional traffic in the cell.

[22]Roccetti, M. et al., Bringing the wireless Internet to UMTS devices: a case study with music distribution, to appear in the International Journal of Multimedia Tools and Applications, Kluwer, 2003.