All Contribute To The Design

As we touched on at the top of this chapter, the number of people involved in a typical game production has grown steadily since the beginnings of the industry. Additionally, both budgets and timelines for production have increased. Because of this, the expectations for sales of each game have grown higher as well.

For a major publisher like Electronic Arts to justify producing a game title today, they have to project that it will sell at least one million units. This means that they are only interested in producing games that have the potential to be blockbusters.

Figures 12.4 and 12.5 show the evolution of team size and development time for an A-list title on each of the major console systems. A-list PC games have experienced a similar growth in team size and development time. These estimates were provided by Steve Ackrich, Vice President of Product Development at Atari, based on his eighteen years in the game industry. Ackrich has extensive experience producing console games, 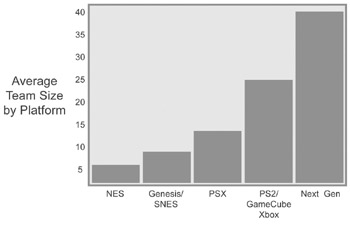 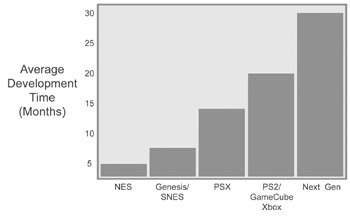 managing internal and external developers, and overseeing product acquisitions among other responsibilities. He's worked for many publishers and developers including Sega of America, Activision, and Accolade.

You may be wondering how many people from each job category work on a typical title. Ackrich shared the estimates in Figure 12.6 with us. As you can see, not only have team sizes grown over time, but specialization in areas like programming and art have created new categories of employment. 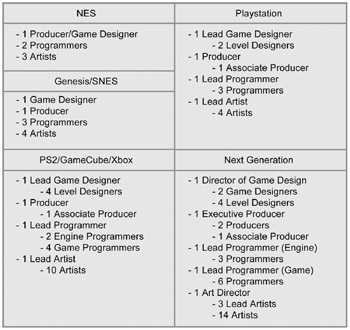 As teams have grown and production schedules have lengthened, the stress on the team, professionally and personally, has grown as well. The following sections are designed to help you understand what factors can make a team come together, how to build a team, and how to keep that team communicating during the entire production.