What is a resource exactly? In the real world, resources are assets (i.e., natural resources, economic resource, human resources) that can be used to accomplish certain goals. In a game, resources play much the same role. Most games use some form of resources in their systems, such as chips in poker, properties in Monopoly, and gold in WarCraft. Managing resources and determining how and when to control player access to them is a key part of the game designer's job.

How does a designer decide what resources to offer to players? And how does a player control access to those resources in order to maintain challenge in the game? This is a hard question to answer in the abstract. It's easier if we take an example that you're probably familiar with.

Think of a role-playing game like Diablo. What are some of the resources you might find in such a system: money, weapons, armor, potions, magic items? Why don't you find things like rubber bands or pieces of pie? While it might be fun to find such random items, the truth is, a piece of pie won't help you achieve the goals of the game. The designers have carefully planned how you can find or earn the very resources that you need to accomplish the goals they've put before you. You may not find or earn as much money as you would like, but if you meet the challenges the game presents, you will gain resources that will allow you to move forward. If you did not gain these resources, the game system would be unbalanced.

By definition, resources must have both utility and scarcity in the game system. If they do not have utility, they are like our piece of pie: a funny and strange thing to find but essentially useless. On the same note, if the resources are overly abundant, they will lose their value in the system.

What are the resources in the games Scrabble and Doom? How are they useful to players? How are they made scarce by the game system?

Many designers fall into the trap of copying existing games when it comes to resource management. One way to break your game out of the tried and true rut is to think about resources in a more abstract sense. Look at the basic functions of resource types and try to apply these in new and creative ways. To illustrate what we mean, let's review some abstract examples that you should consider when designing your game.

The classic scarce resource in action games are lives. Arcade games are built on the management of this primary resource. Examples of this are games like Space Invaders or Super Mario Bros., where you have a certain number of lives to accomplish the goals of the game. Lose your lives, and you have to start over. Do well, and you earn more lives to work with. Lives as a resource type are usually implemented as part of a fairly simplistic pattern: more is always better, and there's no downside to earning lives.

A slightly different concept from lives is that of units. In games in which the player is represented in the game by more than one object at a time, you generally have unit resources to manage rather than lives. Units may be all of one kind, as in checkers, or a number of different types, as in chess. Units may keep the same values throughout the game, or they may upgrade or evolve, as in real-time strategy games. Units may be finite (i.e., once they are lost, they are lost for good), or they may be renewable, as in games that allow players to build new units over time. When units are renewable, they often have an associated cost per unit. Determining this cost per unit, and how it balances with the rest of the resource structure can be tricky. Playtesting is the one good way to determine if your cost per unit is balanced. 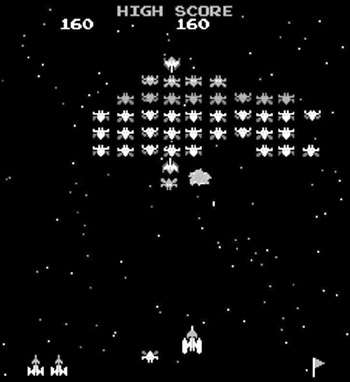 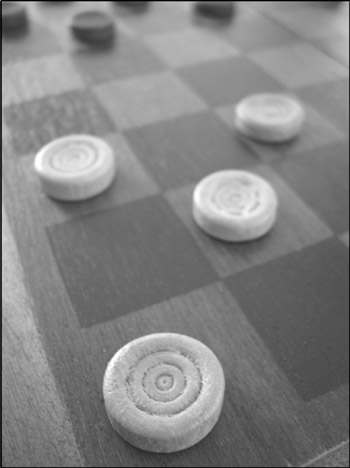 Health can be a separate resource type, or, it can be an attribute of an individual life in a game. No matter how it is thought of, when health is used as a resource, it helps to dramatize the loss or near- loss of lives and units. Using a resource like health usually means that there is some way to increase health, even as it is lost as part of gameplay.

How might players raise health levels in a game? Many action games place 'medical kits' around their levels-picking one up raises a player's health. Some role-playing games force players to camp in order to heal their characters. Each of these methods has its uses in a particular genre. The action game uses a method that is very fast, while being somewhat unrealistic. The role- playing example is more realistic within the story aspect of the game, but it's slow and potentially frustrating to players. 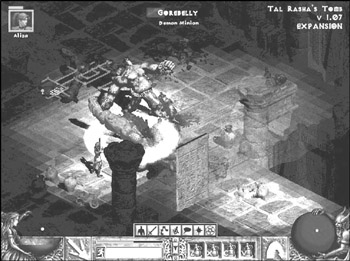 One of the most powerful resource types in any game is the use of currency to facilitate trade. As we'll see in Chapter 5 on page 116, currency is one of the key elements of an in-game economy. It is not the only way to create an economy-as many games also use barter systems to accomplish the same goals. Currency in games plays the same role it does in real life: it greases the wheels of trade, making it easier for players to trade for what they need without having to barter using only the goods they have on hand. Currency need not be limited to a standard bank note system, however.

In some games, actions, such as moves or turns, may be considered resources. An example of this is the game of 20 Questions-your questions have utility and scarcity in this system, and you have to ration them carefully to guess the answer within your limit. Another example is the phase structure of the turns in Magic: The Gathering. Each turn is made up of phases; some specific actions can be performed in each phase. Players must plan their turns carefully in order not to waste any potential actions. 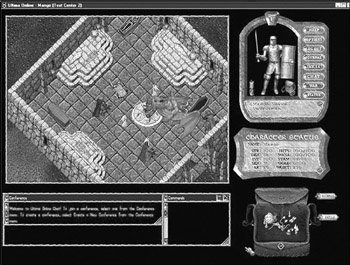 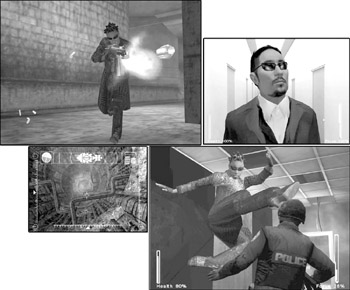 Even real-time games can restrict actions that are too powerful, and by doing so, these actions become resources that need to be managed by the players. An example of this can be seen in Enter the Matrix, where the 'focus' feature allows players to enter bullet time, slowing down the action so they can move more 'quickly' relative to their opponents. You have only so much time to 'focus,' however, before you return to normal time. Managing the use of your focus time is a key part of gameplay.

Not all objects in a game function as resources; some may be obstacles, or simply dressing for the environment. But if an object has utility and scarcity, as we've defined, it may be considered a resource. We've already mentioned the armor, weapons, and other objects found in role-playing games such as Diablo. These objects help players to accomplish game objectives, and they are made scarce by their high price at purchase, or by the opportunity cost of finding them in dungeons guarded by more and greater monsters.

One classic type of object resource is the 'power-up.' Whether it is magic mushrooms in Super Mario Bros. or Blue Eco in Jak and Daxter, power-ups, as their name implies, are generally over-powered resources, giving a tremendous boost to the player beyond that of normal resources in the game. However, their power is balanced to their scarcity, in that they are available for a very short time or for only a single instance.

Related to objects, but linked solidly to location, some resources are available only by occupying or controlling terrain. Terrain as a resource is an important part of real-time strategy games and map-based war games. In games like WarCraft II, the currency of the game (wood, gold, oil) is extracted from special areas of the terrain, so these areas become important primary resources. Other types of games also use terrain as a resource in ways you might not think of. The triple letter squares in Scrabble are important resources found on the terrain of the game board, as are the bases on the diamond of a baseball field.

Some games use time as a resource-restricting player actions by time, or phases of the game in periods of time. A good example of time used as a resource can be seen in speed chess, where players have a total amount of time (for example 10 minutes) to use over the course of a game. Players alternate turns as normal, but a game clock keeps track of each player's used time. Another example of time as a resource are the children's games hot potato and musical chairs. In each of these cases, players struggle not to be 'it,' whether that means holding the hot potato or being the only one without a chair, when the time is up. Time is an inherently dramatic force when used as a resource. We are all familiar with the tension of a countdown deadline, or the anticipation caused by a ticking bomb in an action movie. When used as a resource that players must ration or work against, time can add an emotional aspect to a game design. 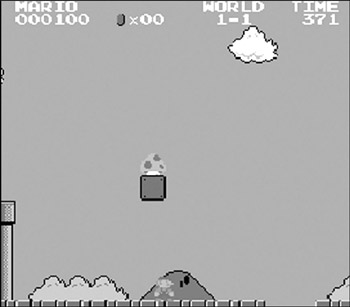 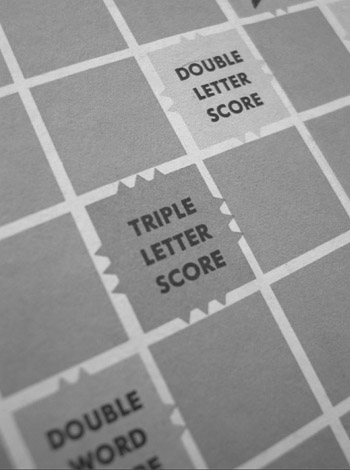 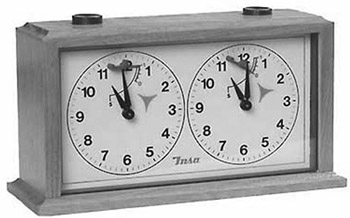 For each of the resource types (found starting on page 68), create a list of your favorite games that use resources of that type. If you can't think of any games that use a particular type of resource, research games that do and play several of them.

These are just some of the resource types that you should think about using when designing your own games. We challenge you to both create your own original types of resources and take resource models from one genre and adapt them to games where they're seldom, if ever, used. You may be surprised with the results.