Conflict emerges from the players trying to accomplish the goals of the game within its rules and boundaries. As we've already mentioned, conflict is designed into the game by creating rules and procedures that do not allow players to accomplish their goals directly. Instead, the procedures offer fairly inefficient means toward accomplishing the game objective. While inefficient, these means challenge the player, by forcing them to employ a particular skill or range of skills. The procedures also create a sense of competition or play, which is enjoyable in some way, so that players will submit themselves to this inefficient system in order to gain the ultimate sense of achievement that comes from participating.

Here are some examples of things that cause game conflicts to emerge:

These examples point to three classic sources of conflict in games: opponents, obstacles, and dilemmas. Let's look at each of these more closely to see what they offer in terms of various types of gameplay.

Obstacles are a common source of conflict in both single and multiplayer games, though they play a more important role in single-player games. Obstacles may take a physical form, such as the sack in a sack race, or the water on a golf course, or the bumpers on a pinball table. Or, obstacles may involve mental skills, such as the puzzles in an adventure game.

In multiplayer games, other players are typically the primary source of conflict. In the previous examples, Quake uses other players in addition to nonplayer opponents and physical obstacles to create conflict in the game. Also, Monopoly's conflict comes from interactions with other players.

Explain how conflict is created in the following games: Tetris, Frogger, Bomberman, Minesweeper, and solitaire. Does the conflict in these games come from obstacles, opponents, dilemmas, or a combination of these?

As opposed to physical or mental obstacles and conflict from direct competition with other players, another type of game conflict may come from dilemma-based choices that players have to make. An example of a dilemma in Monopoly is the choice of whether to spend money to buy a property or use that money to upgrade a property that is already owned. Another dilemma would be whether to stay in or fold in poker. In both cases, players have to make choices that have good or bad potential consequences. A dilemma can be a powerful source of conflict in both single- and multiplayer games.

James Ernest is a prolific designer of board and card games. He publishes many of his creations through his company, Cheapass Games. 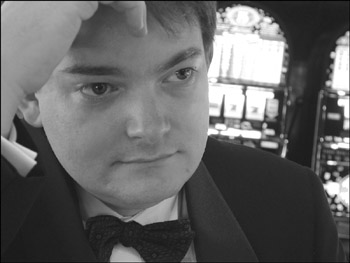 I was friends with some of the people at Wizards of the Coast in 1993, right before they released Magic:The Gathering. I worked with them on support material for that game and designed new games to submit to them for publication. With a backlog of unpublished designs, I started my own game company in 1996.

I like simple games, whether they have deep strategy or not. By time spent playing, my five favorite games would have to be poker (by a wide margin); Diceland; blackjack, Dungeons & Dragons (although it was fifteen years ago), and my family's unique version of cutthroat pitch. I also play plenty of video games, and sports like bocce and pool.

Poker tops the list because of several factors: I can make money at it, so as a classically trained consumer zombie I'm pretty fascinated by that. The rules are incredibly simple. And it has strong components of both mathematical and psychological strategy, perfected by a society of expert players. I also like games with an element of luck, which is why you'll find me playing poker instead of chess.

Magic: The Gathering inspired me both to imitate the things it did right, and to learn from its mistakes. Before Magic came out, I'd given very little thought to formal game design (though I'd written a few games, including a chess variant), and being closely associated with it I became acutely aware that games were something you could design for a living. One of the most inspiring things about Magic was its original format: to imitate that success I continue to experiment with new formats. I haven't made a hit yet, but at least I deserve a little credit for trying.

In terms of specific game designs, I'm most proud of my most original work: the invention and improvement of my own version of the real-time card game (Falling, Brawl, and Fightball), Diceland, and Button Men. I'm also proud of the funniest of my games, like the Doctor Lucky and Friedey's series. On the whole, Cheapass Games is well known and even respected (in some circles), and that's no mean feat.

Like any creative artist, a game designer will generate a lot of garbage before he creates a masterpiece.

Don't be so attached to your work that you refuse to see its flaws. It's easy to fix your game by adding rules, but it's better to take them away. It's easy to copy what you see in the market, but it's better to look for what isn't there. You can try to write a game for a player you don't know, but your best target will always be yourself. That's why the sign in my office says, 'Write the game you want to play.'