We said in the last chapter that rules define game objects and define allowable actions by the players. Some of the questions we might ask ourselves about rules are: how do players learn the rules? How are the rules enforced? What kinds of rules work best in certain situations? Are there patterns to rule sets? What can we learn from those patterns?

Like procedures, rules are generally laid out in the rules document of boardgames. In digital games, they may be explained in the manual, or they may be implicit in the program itself. For example, a digital game may not allow certain actions without explicitly stating that fact; the interface may simply not provide controls for such an action, or the program may stop a player from performing that action if it is attempted.

Rules may also close up loopholes in the game system. One classic example of this is the famous rule from Monopoly: 'Do not pass go, do not collect $200.' This rule is applied when a player is sent to jail from any spot on the board. It's important because if it were not stated, a player could make the argument that moving from past 'go' all the way to jail entitled him to collect $200, transforming the intended punishment into a reward.

When you are designing rules, as when you are designing procedures, it's important to think of them in relation to your players. Too many rules may make your game unplayable. Too few rules may make your game so simple as to be unchallenging. Poorly communicated rules may confuse or alienate players. Even if the game system (in the case of a digital game) is tracking the proper application of rules, the players need to clearly understand them so that they do not feel cheated by the consequences of certain rules.

Here are some sample rules from several different types of games that we can use as reference for the following discussion:

Even from this short list, there are some ideas that start to emerge concerning the nature of rules.

Games do not inherit objects from the real world; rather, they create their own objects and concepts, usually as a part of their rule set. These may be completely fabricated, or they may be based on real world objects, but even if they are based on familiar objects, they still need to be defined in the rules as to their nature in the game.

Think about the poker rule regarding the concept of a 'straight' or a 'straight flush.' This is a concept unique to the game. There is no 'straight' outside of the realm of poker. When you learn the rules of poker, one of the key concepts to learn is the make-up and values of certain hands-a 'straight' being one of these hands.

Then again, there is chess. We know that chess has objects in its system called kings, queens, bishops, etc., all of which do have counterparts in the real world. But this is misleading; the king in a chess game is an abstract object with explicit rules defining its nature. A king outside of the game bears no resemblance to this abstract game object. The rules of chess have simply used the notion of a king to give context to the behavior and value of this important piece.

Boardgames and other nondigital games generally define their objects explicitly as a part of their rules sets. Players must read and understand these rules, and then they have to be able to adjudicate the game themselves. Because of this, most nondigital games limit themselves to fairly simple objects, with only one or two possible variables or states for each, usually denoted by some physical aspect of the equipment, board or other interface elements. In a boardgame like chess, the only variables for each piece are color and position, both of which the player can easily track visually.

Digital games, on the other hand, may have objects, such as characters or fighting units that are made up of a fairly complex set of variables, which define their overall state. Players may not be aware of this entire state, since, unlike a board- game, the program can track the variables behind the scenes. For example, here are the default variables underlying both knights and ogres in War- Craft II:

While these variables are important to how the play proceeds, and they are in fact available to players via the interface, they are not something that players must directly deal with during game- play. Even the most advanced player probably does not calculate their strategy using these mathematical rules. Rather, they gain an intuitive knowledge of the knight's cost, strength, power, range, etc., versus the other units on the board through their play experience. 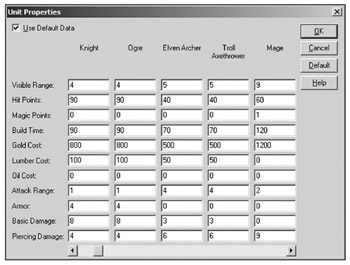 When defining your game objects and concepts, an essential thing to keep in mind is how players will learn the nature of these objects. If the objects are complex, will the players have to deal with that complexity directly? If the objects are simple, will players feel they are differentiated enough from each other to make an impact on the gameplay? Do the objects evolve? Are they only available under certain circumstances? How will players learn the nature of each object in the game?

Figure 3.24: Dimensions of a football field

The next general rule concept we can see reflected in our list of sample rules is the idea of rules restricting actions. In chess, the rule that 'a player cannot move their king into check' keeps players from losing the game by accident. The example from Go where 'a player cannot make a move that recreates a previous state of the board,' keeps the players from becoming locked in a never-ending loop of play. Both of these address potential loopholes in the game systems.

Additionally, rules restricting actions may take the form of basic delimitations: 'the play takes place on a field of 360' x 160'' (football) or 'a team shall be composed of not more than 11 players, one of whom shall be the goalkeeper' (soccer). In both of these cases, we can see that the rules overlap with other formal aspects-namely the number of players and the boundaries of the game.

This is actually true of all formal aspects, which will be represented in either the procedures or the rules in some way.

Another example of rules that restrict actions is in the type of rules that keep gameplay from becoming imbalanced in one or more players' favor. Think about the effects of the rule from War- Craft II where 'in order to create knight units, a player must have upgraded to a keep and built a stable.' What this means is that one player cannot simply choose to use their resources early in the game to create knights, while other players are still creating lower-level fighting units. All players must progress along a fairly similar path of resource management in order to gain more powerful units.

There are many types of rules that restrict action. Here is a list of games: Twister, Pictionary, Scrabble, Operation, and Pong. What rules within these games restrict player actions?

Rules also can trigger effects based on certain circumstances. For example, 'if' something happens, there is a rule that 'xyz' results. In our list of sample rules, the condition from You Don't Know Jack falls into this type of rule: 'If a player answers a question incorrectly, the other players get a chance to answer.' Also, this rule from Jak & Daxter is of the same quality: 'If a player runs out of green mana, they are ‘knocked out' and return to the last beginning of the level.'

As with procedures, the way in which you define your rules will be affected by your play environment. Rules need to be clear to players, or, in the case of digital games that adjudicate for players, they need to be intuitively grasped so that the game seems fair and responsive to given situations. In general, it's important to keep in mind that the more complex your rules are, the more demands you'll place on the players to comprehend them. The less well that players understand your rules, whether rationally or intuitively, the less likely they will be able to make meaningful choices within the system, and the less sense they will have of being in control of the gameplay.

In the same way that you wrote down the procedures for blackjack in Exercise 3.5, now write down the rules. It's harder than you think. Did you remember all the rules? Try playing the game as you've written it. You may realize you've forgotten something. What rules did you forget? How did those missing rules affect the play of the game? 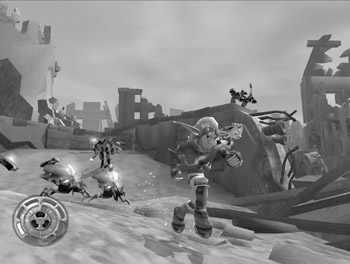 Rules that trigger effects are useful for a number of reasons. First, they create variation in game- play. The circumstances that trigger them are not always applicable, so it can create excitement and difference when they come into play. The example from You Don't Know Jack shows this quality. In this case, the second player gets a chance to answer the question, already having seen the results of the first player's guess. Because of this, they have an advantage, a higher percentage chance of answering correctly.

Additionally, this type of rule can be used to get the gameplay back on track. The rule from Jak & Daxter shows this. Since the game is not 'competitive' in the sense that it is a single-player adventure, there is no reason for the player to 'die' when they lose all their mana. However, the designers do want the player to be penalized in some way so that they will take care with their actions and try to keep from losing mana. Their solution is the previous rule: players are penalized, but not badly, for losing all their mana. This gets the game back on track, incentivizing the player to work harder to keep their mana loss in check.