Procedures are the methods of play and the actions players can take to achieve the game objectives. One way to think about procedures is: who does what, where, when, and how?

There are several types of procedures that most games tend to have:

Select Button: Use this button to select the type of game you wish to play.

Start Button: Press this button to start the game. If you press it during play it will pause/unpause the game.

Left Arrow: Walk to the left. Push button B at the same time to run.

Right Arrow: Walk to the right. Push button B at the same time to run.

Down: Crouch (Super Mario only).

Jump: Mario jumps higher if you hold the button down longer.

Swim: When in water, press this button to bob up.

Accelerate: Press this button to run. If while holding B, you press A to jump, you can jump higher.

Fireballs: If you pick up a fire flower you can use this button to throw fireballs. 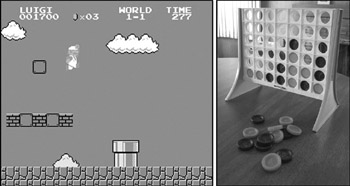 List the procedures for blackjack. Be specific. What is the starting action? The progression of action? Any special actions? The resolving action?

Digital games can have much more complex game states than nondigital games. They can also have multifaceted system procedures that work behind the scenes, responding to situations and player actions. In a role-playing combat system, character and weapon attributes may be used as part of a system calculation determining whether a particular player action succeeds, and if so, how much damage it causes. If the game were to be played on paper, as many role-playing games are, these system procedures need to be calculated by the players, using dice to generate random numbers. If the game is played digitally, the same system procedures are calculated by the program rather than the players.

Because of this, digital games can involve more sophisticated system procedures and process them more quickly than nondigital games. This does not mean that digital games are 'more complex' than nondigital games. When we discuss system structures in Chapter 5 on page 112, we'll look at systems that have simple procedures, which lead to extremely complex results. For example, games like chess or Go are nondigital systems that have intrigued players for thousands of years with their innate complexity, all of which stems from the relationship of very simple game objects and the procedures for manipulating them.

When I went to school at MIT, I lived on 41st West, a dormitory hall that was home to a number of quirky individuals. Around 1990, several of my 41st West friends (including Dan Schmidt, Jon Maiara, James Fleming, Tim Stellmach, and the ubiquitous Doug Church) joined with Paul Neurath to form Blue Sky Productions. They were working on a game called Underworld. The game later became Ultima Underworld and the company later became LookingGlass Studios. I joined in 1992, and the rest is history.

I'm proud of every time the team I've worked with has had the courage to cut an unnecessary feature. And I'm proud to have had the chance to work with people who have more of that courage than I do.

When you are defining the procedures for your game, it's important to keep in mind the limitations of the environment in which your game will be played. Will your game be played in a nondigital setting? If so, you will want to make sure they're easy for players to remember. If your game will be played in a digital setting, what type of input/output devices will that setting have? Will players have a keyboard and mouse, or will they have a proprietary controller? Will they sit close to a high-resolution screen, or several feet from a low-resolution screen? 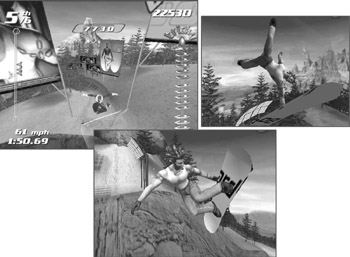 Procedures are, by nature, affected by these physical constraints. As a designer, you need to be sensitive to constraints and find creative and elegant solutions so that the procedures are intuitive to access and easy to remember.