Implementing Data Transfer Object in .NET with a DataSet

The following is a simplified Web application that communicates with an ASP.NET Web service to deliver recording and track information to the user. The Web service in turn calls a database to provide the data that the client requests. The following sequence diagram depicts the interaction among the application, the Web service, and the database for a typical page. 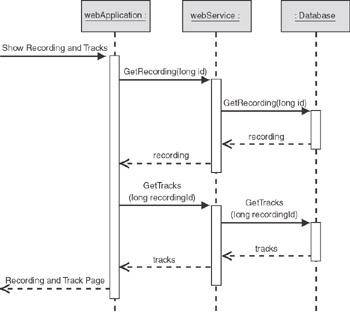 The schema that is used in the example shown in Figure 5.17 depicts a recording record that has a one-to-many relationship with a track record.

One way to improve the performance of this user request is to package all the required data into a data transfer object (DTO) that can be sent with a single call to the Web service. This reduces the overhead associated with two separate calls and allows you to use a single connection with the database to retrieve both the recording and the track information. For a detailed description of how this improves performance, see the Data Transfer Object pattern.

A DataSet holds a collection of DataTable objects. Each DataTable object represents the data that was retrieved using a SELECT statement or stored procedure execution. The data in a DataSet can be written out or read as XML. A DataSet also stores schema information, constraints, and relationships among multiple DataTable objects. Through a DataSet, you can add, edit, and delete data; therefore, a DataSet makes an ideal data transfer object in the .NET Framework, especially when you add the requirement to display the DataSet in controls on a form.

Because the .NET Framework already implements the DataSet, the remainder of this implementation strategy focuses on how to fill a DataSet from a data source and how to use the resulting DataSet in the Web Form.

Filling a DataSet from the Database

This example demonstrates how to fill the DataSet with the data that the sample application requires by using a database query. This includes the recording record as well as all the track records that are associated by the recordingId.

The Assembler class is a specialized instance of the Mapper pattern [Fowler03]. Its purpose is to isolate the DTO from the rest of the system. The following code example shows how the DTO is created from the database:

This code has some interesting aspects. You need to execute queries to fill both the recording and track tables. You must also explicitly define the relationship between the two tables even though the relationship is defined in the database.

Using a DataSet in an ASP.NET Page

When using the .NET user interface controls (Web Forms or Windows Forms) a DataSet is a natural choice. For example, the sample application page uses two DataGrid controls, RecordingGrid and TrackGrid. Because you need to retrieve both the recording and the tracks for the recording, it makes sense to use a single DataSet that contains multiple tables.

Given the DataSet that was built by the Assembler class, this code displays how to assign a DataSet to the DataSource property of the two grid controls:

Because the DataSet is provided by the .NET Framework, you do not need to write tests to verify that it functions correctly. You could argue this point, but you should assume that classes provided by the Framework are innocent until proven guilty; therefore, what you need to test is the code that assembles the DataSet, which in this case is the Assembler class.

This fixture tests that the contents of the DataSet are filled and that the relationship between recording and track is defined correctly:

These tests describe how to access the individual elements of the DataSet. The tests themselves demonstrate some of the issues, in that you need to know the column names as well as the types of the objects. Because of this direct dependency, this code must change if the database schema changes. These types of issues are mitigated when you use a typed DataSet. For more information, see Implementing Data Transfer Object in .NET with a Typed DataSet.

The following are the benefits and liabilities related to using a DataSet as a data transfer object: