You are designing a distributed application, and to satisfy a single client request, you find yourself making multiple calls to a remote interface, which increases the response time beyond acceptable levels.

How do you preserve the simple semantics of a procedure call interface without being subject to the latency issues inherent in remote communication?

When communicating with a remote object, consider the following tradeoffs:

Create a data transfer object (DTO) that holds all data that is required for the remote call. Modify the remote method signature to accept the DTO as the single parameter and to return a single DTO parameter to the client. After the calling application receives the DTO and stores it as a local object, the application can make a series of individual procedure calls to the DTO without incurring the overhead of remote calls. Martin Fowler describes this pattern in Patterns of Enterprise Application Architecture [Fowler03].

The following figure shows how a client application makes a sequence of remote calls to retrieve the various elements of a customer name. 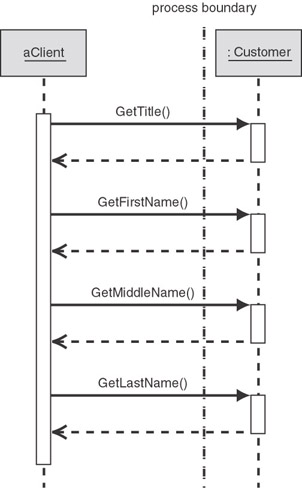 Figure 5.13: Remote calls without a DTO

A DTO allows the remote object to return the whole customer name to the client in a single remote call. In this example, doing so would reduce the number of calls from four to one. Instead of making multiple remote calls, the client makes a single call and then interacts with the DTO locally (see Figure 5.14 on the next page). 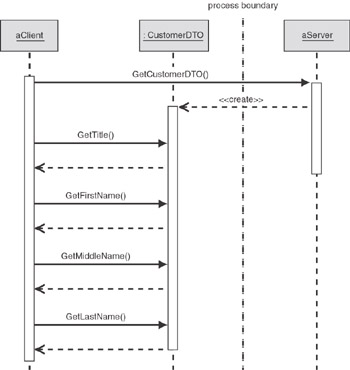 Figure 5.14: Reducing the number of calls by using a DTO

A DTO is a simple container for a set of aggregated data that needs to be transferred across a process or network boundary. It should contain no business logic and limit its behavior to activities such as internal consistency checking and basic validation. Be careful not to make the DTO depend on any new classes as a result of implementing these methods.

When designing a data transfer object, you have two primary choices: use a generic collection or create a custom object with explicit getter and setter methods.

A generic collection has the advantage that you only need a single class to fit any data transfer purpose throughout the whole application. Furthermore, collection classes (for example, simple arrays or hashmaps) are built into almost all language libraries, so you do not have to code new classes at all. The main drawback of using collection objects for DTOs is that the client has to access fields inside the collection either by position index (in the case of a simple array) or by element name (in the case of a keyed collection). Also, collections store items of the same type (usually the most generic Object type), which can lead to subtle but fatal coding errors that cannot be detected at compile time.

Creating custom classes for each DTO provides strongly-typed objects that the client application can access exactly like any other object, so they provide compile-time checking and support code editor features such as Microsoft IntelliSense technology. The main drawback is that you could end up having to code a large number of these classes if your application makes a lot of remote calls.

A number of options try to combine the benefits of the two approaches. The first is code generation that generates the source code for custom DTO classes off existing metadata, such as an Extensible Markup Language (XML) schema. The second approach is to provide a more powerful collection that is generic but stores relationship and data type information along with the raw data. The Microsoft ADO.NET DataSet supports both approaches (see Implementing Data Transfer Object in .NET with a DataSet).

The best solution is to use the Assembler pattern [Fowler03], which creates DTOs from business objects and vice versa. Assembler is a specialized instance of the Mapper pattern also mentioned in Patterns of Enterprise Application Architecture [Fowler03]. 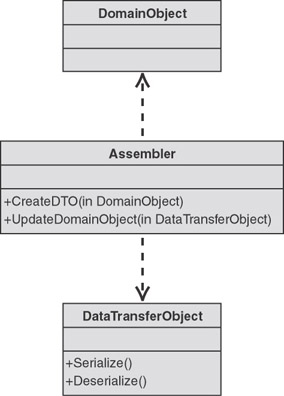 Figure 5.15: Using an Assembler to load data into the DTO

See Implementing Data Transfer Object in .NET with a DataSet

DTOs also contribute to the testability of remote functions. Having the results of a remote method available in an object instance makes it easy to pass this data to a test module or to compare it with the desired outcome.

Ideally, data obtained from untrusted sources, such as user input from a Web page, should be cleansed and validated before being placed into a DTO. Doing so enables you to consider the data in the DTO relatively safe, which simplifies future interactions with the DTO.

The security credentials of the processes and associated users receiving the DTO are also important to consider. DTOs often contain a large amount of information that is assembled from many different sources. Are all users of the DTO authorized to access all the information contained within it? The best way to ensure that users are authorized is to populate the DTO with only the specific data that is authorized by the users’ security credentials. Try to avoid making the DTO responsible for its own security. This increases the number of dependences the DTO has on other classes, which means these classes must be deployed to all nodes on which the DTO is used. It also spreads the security functionality across more classes, which increases security risk and negatively affects flexibility and maintainability.

Data Transfer Object results in the following benefits and liabilities: