I don't know what is worse . Digging through my voicemail and deleting all the SPAM or getting 25 calls a day trying to sell me Viagra. I think I am going to just turn this stupid phone off. User reaction to SPIT

Anyone using a PC is familiar with email SPAM. Anyone with an email address is familiar with the constant barrage of irritating messages, trying to sell you mortgages, sexual enhancement products, replica watches , gambling opportunities, and so on. Those of us who do not use SPAM filters often receive well over 100 SPAM messages a day. Even when using SPAM filters, some SPAM still gets through, or worse yet, some number of valid messages are identified as SPAM and deleted or sent to a junk mailbox. Plus, as SPAM filters improve, the spammers find new ways to sneak messages through.

Voice SPAM or SPAM over Internet Telephony (SPIT) is a similar problem that will affect VoIP. SPIT, in this context, refers to bulk, automatically generated, unsolicited calls. We don't consider traditional telemarketing to be SPIT. Telemarketing is certainly annoying and is often at least partially automated. Telemarketers employ "auto-dialers," which dial numbers trying to find a human who will answer the phone. When a human answers and is identified, the call is transferred to another human, who begins the sales pitch. These auto-dialers are pretty good about differentiating a human voice from an answering machine or voicemail system. Some telemarketers use automated messages, but considering the cost of making calls, most will use humans to do the talking. 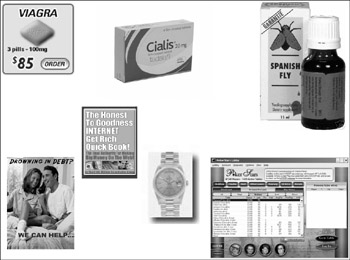 Also, at least for now, it still costs money to make calls. Telemarketers can't afford to make enormous numbers of calls. This is in contrast to sending email messages, which costs virtually nothing. Making large numbers of calls is expensive for the following reasons:

Keep in mind that a small percentage of the calls made are actually answered by a human (many go to voicemail). Assuming a 10 percent hit ratio and 10 available telemarketers, only 10 total concurrent telemarketing calls can be handled. This is arguably inefficient, considering the investment in equipment, T1 access lines, long distance charges, and personnel.

With VoIP, these costs are greatly reduced, which is why SPIT will resemble email SPAM more than telemarketing. Due to the possible volume, the hit rate percentage can be a lot lower, eliminating the need for humans to make the calls. The attacker still needs humans to answer calls for the people who respond to the SPIT calls, but these are more likely than a "cold" initial telemarketing call to result in a sale.

With VoIP, the cost of setting up a PBX is also lower. A commercial PBX could be used or the attacker could use a freeware system, such as Asterisk, and be up and running for about the cost of a decent PC. Because the network access is VoIP (most likely SIP), expensive circuit-switched T1 access cards are not required. The attacker will still need some number of phones, but fewer than would be needed for a traditional telemarketer. Softphones are also an option, but they only make sense if the telemarketers are already using PCs.

VoIP is also expected to reduce the cost of making calls. At the current time, most VoIP calls terminate onto the Public Switched Telephone Network (PSTN), meaning the calls cost about the same as straight circuit-switched calls. More and more VoIP calls do not terminate on the PSTN. Over time, these end-to-end VoIP calls are expected to cost less and less, eventually perhaps being free. This, more than anything, will make SPIT very attractive, especially for international calls that are prohibitively expensive to make now. With VoIP, this will change, making it economical to generate international SPIT.

Even now, there are quite a few "free VoIP" services that advertise free VoIP or even VoIP-PSTN calls. Just type free voip calls into Google and you will find a long list of companies providing this service. Certainly some of these services could be used as a basis to transport SPIT. Even better, there are services that "anonymize" sources, making it difficult to trace back to the person generating the SPIT.