This section describes the minimum tasks needed to connect your z/VM system to the network. For more details, refer to TCP/IP Planning and Customization, SC24-6019.

At a minimum, the following configuration files must be updated to connect the z/VM TCP/IP to the network:

In the following sections, we discuss some basic networking tasks that are commonly done in a z/VM and Linux environment:

In order for z/VM to give OSA addresses to Linux user IDs, it must have OSA addresses defined to it. OSA CHPIDs are defined in the system IOCDS. They can be defined as either shared or reconfigurable. If you want more than one LPAR to be able to use the OSA at the same time, you must define the CHPID as shared. If only a single LPAR needs the OSA, then it is your choice which you use. In the world of OSD CHPIDs, since the definition of IP addresses is no longer "burned into the card" (that is, manually defining and installing the OSA address table (OAT) into the card), sharing a card is greatly simplified.

Once the z/VM LPAR has OSA addresses, the DEDICATE statement can be used in the user directory entry to "give" the addresses to a Linux user ID. For example, the following statements in the USER DIRECT file under the definition of a user ID will give it two OSA triplets that will support two TCP/IP addresses:

If the OSA addresses are given to a Linux user ID in the USER DIRECT file and that user ID is currently logged on, be sure to shut down Linux and log off and back on again, in order to allow the changes to take effect.

If you want to allocate OSA addresses interactively, the ATTACH command can be used to give an OSA triplet (the three ports necessary to support communication) to Linux user IDs that are logged on. For example, to give LINUXB the OSA triplet at address 2C08, 2C09, and 2C0A, the following command can be used:

The channel device layer in Linux allows for this device to be used without shutting down.

A z/VM Guest LAN provides a method of creating virtual networks. Figure 5-2 on page 75 shows three Linux guests that have both direct OSA connections and z/VM guest LAN connections. Note which aspects of the network are physical and which are virtual. 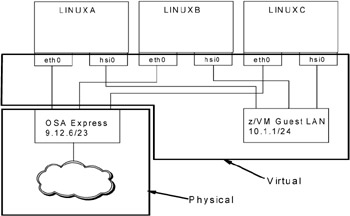 Guest LANs can be one of two types: HiperSockets (the default) or QDIO. A HiperSocket guest LAN is recommended because it might have a slight performance advantage over a QDIO guest LAN, and also because the interface names on Linux will have a prefix of "hsi", which might help distinguish them from physical interfaces (if a QDIO guest LAN is used, both physical ethernet OSAs and virtual guest LAN interfaces will have a prefix of "eth").

To define a Guest LAN, it is recommended you define the LAN in two ways:

The interactive definition is good for the existing z/VM session, while the definition in the SYSTEM CONFIG file ensures the same LAN will be defined after a re-IPL. In both cases, the syntax is the same. Following is an example of defining a HiperSocket guest LAN named GESTLAN1 via the command line on the MAINT user ID. After the LAN is created, it can be queried with the QUERY LAN command:

The same line should be added to the SYSTEM CONFIG file. To update it, you will probably have to release it as a CP disk using the CPRELEASE command. You can then link to the disk read/write (MR) and access it; for example:

You now have the SYSTEM CONFIG file read/write on your F disk. Back it up and add the DEFINE LAN statement to the end of the file. After modifying the file, it is prudent to check the syntax using the CPSYNTAX command which is on MAINT's 193 disk; for example:

Then you can bring the MAINT CF1 disk back online via the CPACCESS command:

The next time z/VM is IPLed, the guest LAN will be defined from the SYSTEM CONFIG file.

After you have defined the Guest LAN, you need to define virtual network interface cards (NICs) for each Linux image. This can be done interactively using the DEFINE NIC command. However, it is recommended that you define the NIC and couple it automatically by an entry in the USER DIRECT file, or by a directory maintenance product, if you are using one. This is done through the user directory SPECIAL statement.

For example, to define a NIC at addresses 600, 601, and 602 that can connect to the system HiperSocket LAN named GESTLAN1, add the following statement to the USER DIRECT file for each user that will need one. If you are using a PROFILE for Linux user IDs, add the statement to the PROFILE so that the Guest LAN triplet will be defined to all Linux user IDs:

After changing the USER DIRECT, remember to run DIRECTXA to bring your changes online. Also, if any of the Linux user IDs are logged on at the time, be sure each one logs off and back on again so the change can take effect.

Log on to TCPMAINT. The TCPIP DATA file is on the TCPMAINT 198 minidisk, which should be accessed as your D disk. XEDIT the file and make the following changes.

Define the DOMAINORIGIN which is the Domain Name Services (DNS) suffix. For example, our suffix is itso.company.com:

Now we describe the important statements in the file, and give an example of how our TCPIP virtual machine is attached to the network; it uses an OSA express connection.

A DEVICE and a LINK statement

Add two lines to the file and enter the following DEVICE and LINK statements:

This defines the device named OSA2C00D as an OSD. Addresses 2C00, 2C01, and 2C02 are the three addresses of the OSA CHPID that are used. OSA2C00 is the PORTNAME. The LINK statement defines a link named OSA2C00L. The protocol to be used is queued direct I/O (QDIO) protocol over ethernet. This link is associated with the device OSA2C00D. The PRIROUTER parameter specifies that all packets be routed to the VM TCP/IP stack, except those intended for other directly connected stacks. This allows further routing to all hosts on the guest LAN. There can be only one stack on the OSA as primary router.

The HOME statement simply provides a home TCP/IP address for the defined link1:

Add the following GATEWAY statement to define the 10.28.29 network:

This statement adds a network address of 9, which is accessible through the link named OSA2C00L. The maximum transmission unit (MTU) size is 1500. Defining the subnet mask in this fashion is probably different from what you are used to doing. The subnet mask for this 10 network definition is 0.255.254.0, and the subnet values are 0.12.6.0. The subnet mask is 255.255.254.0.

Next, add the following DEFAULTNET statement:

Finally, add a START statement for the device named OSA2C00D.

This will start the OSA "device".

When you are first customizing the TCPIP user ID, it is recommended that you log onto it, press Enter when prompted, and read the messages as the TCP/IP stack begins. After you are sure it will start consistently, you can use the XAUTOLOG command; or better, you can have TCPIP start automatically.

You will probably want TCPIP to start automatically. To do this, log on to the AUTOLOG1 user ID and edit the PROFILE EXEC file. Add the following line:

Having to bring TCP/IP up and down may be fine when your system is just being tested. However, when you have a production system, recycling TCP/IP can be a problem.

The OBEYFILE command allows you to make temporary dynamic changes to the system operation and network configuration without stopping and restarting the TCPIP virtual machine. You can maintain different files that contain a subset of the TCP/IP configuration statements and use OBEYFILE to activate them while TCP/IP is running; see "Configuring the TCP/IP Server" in z/VM TCP/IP Planning and Customization, SC24-6019.