In this project, we used z/VM to provide multiple Linux environments on the same zSeries system.

Figure 3-1 shows a highly simplified and stylized view of a zSeries processor and its physical components or resources-processor units, memory (real and expanded storage), channels, control units, and devices. All of these are managed by an operating system; typically this is z/OS, z/VM, or Linux. 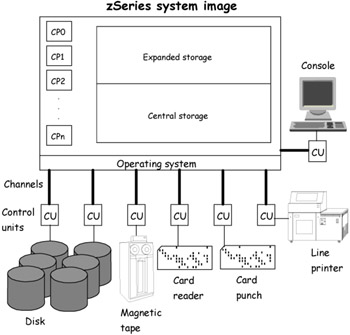 z/VM has special abilities, however. Its two most important components are the control program (CP) and the Conversational Monitor System (CMS). CP is able to virtualize hardware resources. It does this either by partitioning or sharing real hardware resources, or by emulating their behavior programatically.

From the point of view of the operating system running inside the virtual machine, the hardware appears to be real hardware. These running operating systems are sometimes called guests. They can be added or deleted at will by changing the CP directory. We discuss this later.

We refer to z/VM as a hypervisor. The users of each virtual zSeries machine are unaware that a hypervisor is providing the zSeries environment in which their application is running. Each virtual machine has its own virtual memory, virtual devices, virtual processors, and other virtual resources.

Within each virtual machine, a zSeries operating system is IPLed. You can even IPL z/VM within a virtual machine. Each operating system running in its own virtual zSeries environment communicates with virtual devices. The mapping of virtual to real devices and resources is handled transparently by CP. The result is that by running z/VM on the processor shown in Figure 3-1 on page 28, we can replicate the zSeries environment many times over. This is illustrated in Figure 3-2. 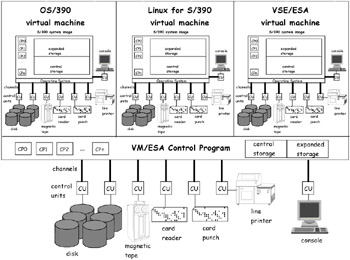 Figure 3-2: Virtual machines running under the control of a hypervisor

The CP or user directory

Most of the statements in this entry define virtual resources or devices.

Now we take a brief look at how CP implements certain device types. Because the S/390 virtual machine concept dates back to the late 1960s and early 1970s, some of the standard devices such as a card reader and card punch may seem antiquated, but they are still extremely useful when virtualized.

Minidisks can be shared or non-shared. If authorized, one virtual machine can link to a minidisk belonging to another virtual machine to access the data on it. Links can either read-only or read-write. When a minidisk is write-shared, some software is needed to manage access to the data.

CP is able to cache the contents of minidisks in real or expanded storage to improve application response times.

Virtual minidisks (sometimes called vdisks) have similarities to temporary minidisks. But instead of being mapped to cylinders of real disk volumes, they are mapped into real storage by CP. This means that they avoid the need for disk I/O. The associated pages are managed by CP as part of its overall real memory management.

These devices are not associated with real devices, but are implemented through the CP spooling subsystem. The spool files created or read on these devices can be transferred between virtual machines very easily.

The console is an important device for the virtual machine, as it is the primary user interface. When you log on to a virtual machine from a real 3270 terminal or 3270 emulator, the virtual console becomes associated with the real 3270. This allows you to enter CP commands and to IPL an operating system.

When an operating system is IPLed in a virtual machine, it will look for a device to be its system console. This device is often the one defined by the CONSOLE statement in the CP directory.

A virtual channel-to-channel device is implemented by CP entirely through software. Virtual I/O instructions are intercepted by CP and the data moved between memory buffers. This enables very high-speed communications between virtual machines.

By dedicating real storage and devices to a virtual machine, the processor-related overhead of CCW translation can be bypassed. A "preferred" guest can perform disk I/O without any intervention by CP.

The Conversational Monitor System (CMS) is a unique zSeries operating system. It is IPLed in a virtual machine in the normal way, but is often a single user environment. You can think of it as the original time-sharing PC! CMS provides a rich application development and execution environment. It has powerful commands and tools that are useful to both developers and end users.

The REXX interpreter makes it easy to write command scripts and even whole applications. The XEDIT editor is a sophisticated editor with a large subcommand set. CMS Pipelines allows the concept of UNIX pipes.

Besides acting as a single-user system, server applications can also be written that run on CMS. Many z/VM products and tools are implemented in this way (the TCP/IP service machine and related daemon virtual machines, for example).