Computer programs are used to solve problems; that is the entire reason people write computer programs. Unfortunately, many beginning computer programmers approach computer programming in an ad hoc manner, simply cobbling together a patchwork of code that hopefully will properly process their data. There is a much more efficient way to solve problems. This method is called an algorithm. An algorithm is a formal methodology for solving a problem. It is a step-by-step recipe for performing some action. When you take a mathematics course in high school or college, you are taught a number of algorithms—methods for solving problems. In math, these problems involve finding the slope of an equation, finding the length of one side of a triangle, or using integral calculus to calculate the area of function. Another way to phrase that definition of an algorithm is to say that an algorithm is a precise definition of a computation.

The bubble sort is a simple but effective method for sorting a list of numbers. The bubble sort starts at the beginning of the list. Each element is compared to the element next to it. If the element on the left is larger than the element on the right, then the two numbers are switched. The process is continued until all numbers are in order. It might be helpful to examine an actual code example. In this example, you will see a larger than usual number of comments. It is hoped that the additional commenting will help you to better understand the example.

Step 1: Enter the following code into a text editor.

Step 2: Compile the code and execute it. You should see something much like what is displayed in Figure 13.4. 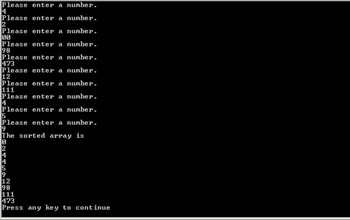 Notice that the first portion of the program is getting the user to enter in 10 integers. The sorting portion is done by a nested loop structure. This is something you may not have previously encountered. A nested loop is a loop that is inside another loop. Each time the outer loop executes, the inner loop will go through its complete cycle. This means that this algorithm has to execute a number of times equal to the maximum of the outer loop, times the maximum of the inner loop. This is important because when one studies algorithms, a great deal of attention is devoted to which algorithm is most effective, which one can execute the quickest.

The second loop in the bubble sort holds the key to this algorithm.

Bubble sort and quick sort are the two most commonly encountered sorting algorithms. That’s not to say that they are the best sorting algorithms, but that they are the most commonly encountered. The quick sort is based on the idea of splitting an array down the middle and sorting both sides, then putting them back together. If both sections are sorted simultaneously then this should, theoretically, sort faster. The following example is commented rather heavily in an attempt to facilitate your understanding of the code presented. There will also be some commentary after the example.