The first 12 chapters of this book have focused on acquainting you with the language of C++. You have explored the syntax, structure, and techniques of this programming language. However, you should be aware that this is only part of the process of programming. Simply understanding language syntax is not enough. One of the fundamental cornerstones of computer science is the study of data structures and algorithms. In this chapter, you will be introduced to both of these topics. 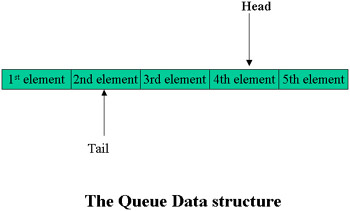 When you use a network printer, each element of the queue array is a document (or, more likely, a fixed amount of memory). The head represents the last place that a document was added to the print queue. After an item is added, the head moves forward one space. The tail represents the processing end of the queue. Once an item is processed (i.e., printed) it is removed from the queue and the tail is advanced. When the head reaches the end of the queue, it starts back over at the beginning, and that is what is referred to as a circular queue. Let’s look at an example using a simple queue of integers.

Step 2: Compile and execute that code. You should see something much like what is depicted in Figure 13.2. 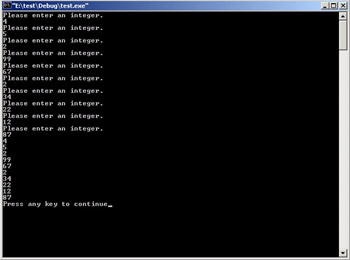 You should notice that, in this example, the pointer’s head and tail are only being used to keep the place of where we are currently. In some cases, programmers will use a plain integer in this case rather than a pointer to an integer. The real problem occurs when your are processing items out, slower than entering them in. You see if the head catches the tail, it will start overwriting things you have not yet processed! Normally, you would check to see if the head is the same value as the tail. If it is, then you tell the user “queue is full” and you don’t take any more input until your processing can catch up.

Another popular data structure is the stack. Whereas a queue processes items on a first-in, first-out basis (FIFO), the stack does its processing on a last-in, first-out basis (LIFO). A stack gets its name from the way it processes data, much like a stack of plates. If you stack up 10 plates, you will have to remove the last one you placed on the stack before you remove any others (unless, of course, you are a magician)). Figure 13.3 illustrates the way a stack works. 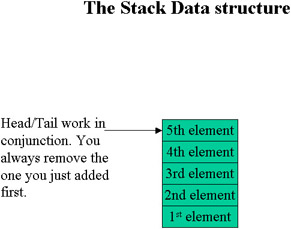 The registers on your computer’s central processing unit (CPU) use stacks. Items are pushed onto the stack and popped off. If you worked with an Assembly programming language, you would become intimately familiar with the stack. However, for our purposes, it is enough that you know what a stack is.

The stack and the queue are just two examples of data structures. There are many more to choose from. It is beyond the scope of this book to examine all these data structures. However, you should be at least aware of what some of these data structures are. You can then use some of the resources listed in the back of this book to learn more if you so desire. In addition to stacks and queues, you may wish to acquaint yourself with the linked list, double linked list, and binary tree.

One more commonly encountered data structure is the linked list. A linked list consists of a series of nodes (made either with structures or classes) that have linked to the next node in the series. The link to the next node is usually accomplished with a pointer to another node. The following is an example of a node.

Each node can then be included in a class. The class must have at least two methods. The first method is a push method to add new nodes to the linked list. The second method is a pop to remove nodes from the linked list. Because of the push and pop methods, a linked list is capable of dynamic sizing. That means that it can grow larger or smaller. This is in direct contrast to an array, which cannot change its size. The next step is to build a class to house the nodes, as well as the push and pop functions. The following example shows you how to create and use a linked list.

Step 1: Place the following code into your favorite text editor and save it as

Step 2: Write the following code into your favorite text editor and save it as 13_02.cpp.

This data structure undoubtedly appears much more complicated than the queue. There are extensive comments in the source code to aid in your understanding. However, let’s take a moment to review the highlights. To begin with, the core of the linked list is the node structure. It holds the data. Now, in our case, the data is an integer; however, it could be any data type at all, including another structure or class.

This structure is encapsulated in a class. We have a pointer that tells us the current node and the next node. We then have two functions that allow us to add new nodes or remove old ones.