In the preceding chapter we looked at shell scripting. If you will recall, we examined the basics of scripting as well as how to write some basic programming techniques in a script. After studying that chapter, you should be basically competent at writing simple shell scripts in Linux. If you will recall, we mentioned that entire books have been written on scripting. That means that a single chapter touched the basics. This chapter certainly won’t make you an expert at writing shell scripts. However, we should take a moment to examine a few items that you might find useful in script writing.

The basic format of a case statement is that you put the word case, followed by the variable, then the word in. After that you list the choices. Each choice is followed by a parenthesis and two semicolons. The entire case statement ends with the keyword esac. Here is a generic example:

Let’s look at an example script:

This may look a little complicated, and there are several rules to remember. Each choice must end with a double semicolon, the entire case statement must end with esac, and each choice is followed by a parenthesis. This may seem like a lot to remember, but with a little practice it will become very natural. This is also another technique that is common to most programming languages.

Multiple Statements on One Line

Sometimes in your script you might have several related statements to write. You might want to put them all on one line. You could do this either to save space or to group commands that belong together logically. For whatever reason, doing it is simple. You separate each command on the line with a single semicolon, as you see here:

Open your favorite text editor and enter the following. Then save it as scriptmultiple.sh and run it.

When you run this, it will work just as if you had placed each command on a separate line. You can see the results in Figure 21.10. 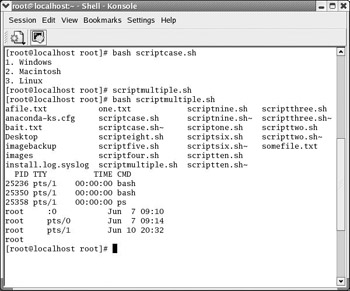 Whether or not to place your commands on a single line or space them out is a matter of preference. Linux scripts allow you to do either. Let’s take another look at putting multiple commands on a single line. What we will do is to put echo statements in the previous script to explain to the user what we are doing. Your script should look something like this:

If you run your script now, you will see something like what is shown in Figure 21.11. 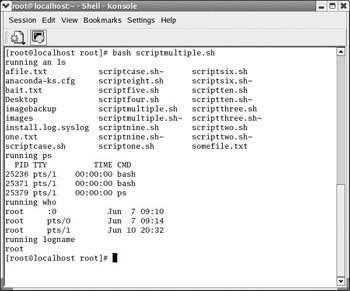