Three of these commands, ps, top, and env, are all related to each other in that they provide valuable information about how your system is currently functioning. The fourth command, kill, is used to stop running processes. The commands ps and top both show the processes that are currently running. Every program, utility, or daemon on your PC is a process. The ps command, shown in Figure 18.8, shows only those processes that you, the current user, initiated. 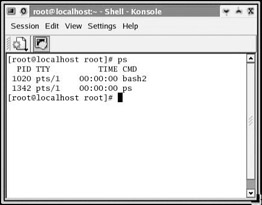 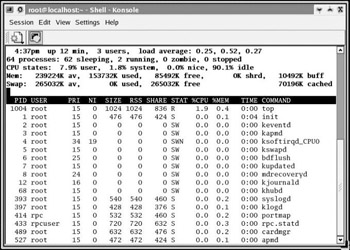 The top command provides a lot of information—perhaps too much. It certainly fills up the screen quickly. This is one instance where the redirect command would be very useful. You can dump the output of the top command to a text file and read it at your leisure. Recall that you do this by typing in:

Then you can open that file in any text editor and read it, search it, or do whatever you want with it. The top command is often used by system administrators either to identify processes that are consuming too much system resources or to search for telltale signs of hackers or viruses.

The path statement is also a very important environmental variable. The path statement lists all the paths in which the operating system will look for a command when you type it in the shell. All the commands we study are actually programs somewhere on your machine. The path statement tells the shell where to look for commands you enter. This is important because there are some software packages you may install, particularly programming tools such as Java, that ask you to add one of their directories to the path. The env command’s display is shown in Figure 18.10. 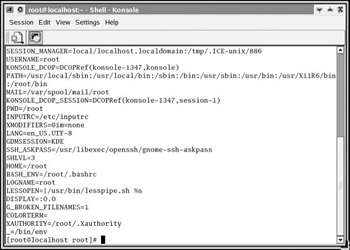 The kill command is perhaps the simplest command of all. You enter the word kill followed by the process ID (PID). An example is kill 1045. Be very careful with this command. If you kill a process the system requires, you could cause the system to function improperly or even crash. This is one reason why you don’t want people to log in as root. Only root can kill a system process. If a user is logged in under a user account, he cannot kill a system process.