In Chapter 3 you were briefly introduced to some file and directory management commands. You were shown how to create directories, copy files, list contents of a directory, and remove files and directories. Several of the commands explored in Chapter 3, and a few new ones that we will examine now, are shown in Table 18.1.

These two commands are used to compare two files and determine what differences the two files have. In order to demonstrate these commands, we will have to create two sample text files. For demonstration purposes you can open up any Linux text editor (Kate or KWrite, for example) and type in the following three lines:

Save that as file1.txt. Start a new text file and enter these three lines: 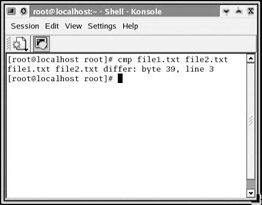 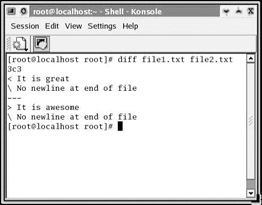 You are probably thinking that the diff command gives you more information than the cmp command, but that is not exactly accurate. The two commands give different output because they compare the files differently. The cmp command compares the files byte by byte in their binary format. Remember that ultimately everything in your computer is stored as ones or zeros (binary format). Therefore, it reports the specific bytes that are different. The diff command performs a textual comparison and returns what line or lines of text are different. Both of these commands can be quite useful. For example, if you have two versions of the same file and want to know exactly what is different between the two, either the diff or the cmp command can tell you. 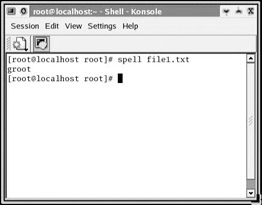 The head command is very useful for searching through files. If you are seeking a particular file and do not recall what the filename is, in Windows you would have to open each file that you think might be it and scan it to see if it is indeed the file you are looking for. The head command will return just the first few lines of a file, and that is usually enough to determine if it is the file you are seeking. This is shown in Figure 18.6. 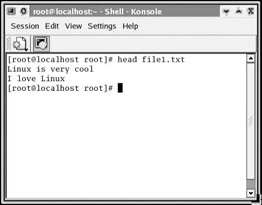 The cat command, shown in Figure 18.7, takes two files and appends one onto the end of the other. This is a very commonly used shell command. There is no equivalent command in Windows. The concatenated contents are then displayed to the screen. 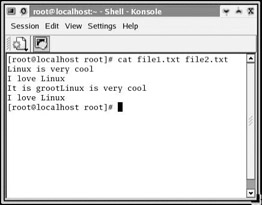 The last, but certainly not least, file management command we will examine is the redirect command. All shell commands by default display their output to the screen. However, there may be instances when you would prefer the output be stored in a file. That is where the redirect command comes in. It causes the output from some other command to be redirected to a file. This is very useful, particularly for some of the system commands we are about to examine. To use the redirect command, enter the command you want to redirect, followed by the greater than sign (>), then the file you want to redirect to. For example, ls > myfile.txt takes the output from the ls command and places it in a file named myfile.txt.