Configuring Apache from Within KDE

Like many things in Linux, you can configure your Apache Web server manually, as we have already discussed, or you can use a convenient graphical utility to configure and start your Apache Web server. To do this, you go to the Start menu, choose System Settings, then More System Settings, and then select HTTP Settings. You will then be looking at a screen like the one in Figure 15.7. 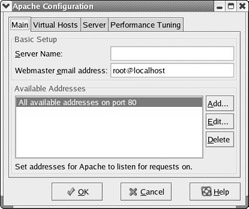 The first tab is where you would set the Server Name and server admin settings. This utility will then write the values you select into the httpd.conf file. If you were trying to test this server for local connection, you would put localhost into the text field labeled Server Name. If you were trying to prepare the server to go live, you would, of course, put your machine’s actual IP address or URL here.

The second tab, shown in Figure 15.8, is for setting up virtual hosts. A virtual host is an advanced feature of many Web servers, and configuring one is beyond the scope of this book. However, a simple definition is in order. A virtual host is what you have when your machine is host to more than one Web address. For example, if your Linux machine were the Web server for an ISP, you might find several customers who want Web hosting space and want to register domains for their Web addresses. This could be done with virtual hosts. 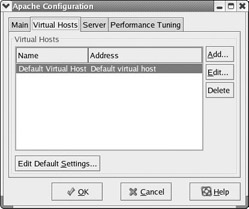 The third tab enables you to customize the server settings and is shown in Figure 15.9. Several of these may be unfamiliar to you and are a bit advanced. You probably should leave these with the default settings. However, you should note the User and Group fields at the bottom of this tab. Your Web server must run as some user with the rights given to that user. In this case there is a special user called Apache and a group called Apache. The reason for having a separate user and group for your Web server is that if you ran it as whatever user was logged in, then anyone who hacked into your Web server would have all the rights of that user. If you are logged in as root, then they would essentially own your system. Even with the separate user and group, it is recommended that you generally avoid running your Web server as root. It is important to realize that Apache will start as root no matter what settings you have. However, it will then change to the user/group you defined before it begins responding to requests. 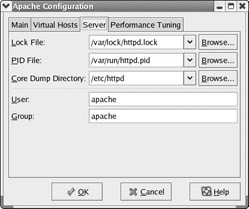 The Performance Tuning tab, shown in Figure 15.10, enables you to adjust items such as the maximum number of connections and the maximum requests per connection. These settings are not so important in a Web server being used for a very small group or by an individual as a hobby. However, if the number of visits to your Web server grows and begins to tax the resources of your machine, you might consider adjusting these settings. 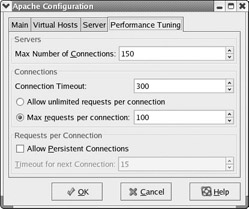 The specifics of how to adjust performance settings are a bit advanced. If you begin to get that much traffic to your Web site, then it is probably time to do some more advanced study on the topic of Apache Web server. This chapter is interested only in getting a basic Web server up and running, not in equipping you to be a Web hosting service!