From Code to Class Diagrams

As described earlier, the purpose of Class Designer can be stated in two ways: as a tool for visualizing existing code, and as a tool for defining the structure of that code in the first place. In this section, we'll look at the visualization of existing code.

As a representation of types, the class diagram offers a pictorial alternative to the Object Browser for examining types. You can visualize types that are not your own — i.e., those from third-party assemblies, including the .NET Framework itself — and you can tailor the visualization to show more or less detail, including the important relationships between the types. The selection and arrangement of types on diagrams should communicate something extra, over and above what would be deduced from the Object Browser.

The StockBroker example that runs through the previous chapters will provide a basis for visualizing existing code using class diagrams. We'll start by drawing a pictorial representation of the UI classes for one of the StockBroker client applications: DealingApp.

Figure 5-2 is a class diagram based on the UI components of the DealingApp Windows application implemented in Chapter 2. 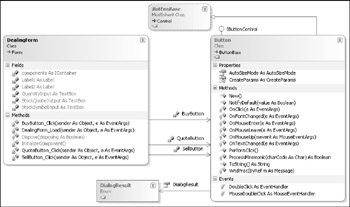 You don't need to follow these steps yourself, but they demonstrate how we created that diagram. Here's what we did:

We'll tell you about the Show as Association and Show Base Type features more formally later. The important thing to understand now is that Class Designer has been used as a tool for inspecting types and their relationships, very much as you would use the Object Browser, although in this case we have specifically drawn a picture showing only the types we want to show, to the level of detail we are interested in, and in a form that we can share with other developers as printed copy.

We have built a picture of the UI classes in our application merely by exploring relationships from the single starting point of the DealingForm, a class that was generated originally from our Application Design, and whose members are instances of .NET or other library types — not types of our own making.

We can use Class Designer to provide a diagrammatic representation of auto-generated classes and those belonging to compiled assemblies, but what about new classes of our own making?

You might recall that in Chapter 2 we invited you to change the return types of the DealingService buyStock and sellStock web methods from integers to StockSale and StockPurchase types. That was to demonstrate the synchronization between the code and the model, whereby changes that you made in code were reflected in Application Designer's Web Service Details window.

We'll take that idea further by conceiving three new classes: StockPurchase, StockSale, and StockDeal, which provides a common base class for both kinds of deal. Let's look at the code for the three StockDeal classes.

The main points to note in the preceding code are as follows:

The two classes that we've reviewed both inherit from the base class StockDeal, the code for which is as follows:

The main points to note in the preceding code are as follows:

Assuming you have the three classes contained within a class Visual Basic Class library, you can create a new class diagram simply by right-clicking the project and choosing Add

New Item from the pop-up menu. Select the Class Diagram item and name it StockDeal.cd, the.cd extension marking this as a class diagram file.

Now all you need to do is drag the three classes from the Class View, or the three source files from the Solution Explorer, onto the diagram, for the result shown in Figure 5-3. You could also build that diagram by multiple-selecting the three classes in Class View or Solution Explorer, right-clicking, and choosing View Class Diagram from the context menu — without having pre-created the blank diagram at all. In that case, the diagram will be given a default name. 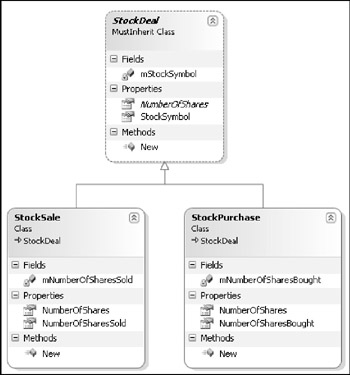 The main points to note on the diagram are as follows:

What you've achieved by dragging those classes onto the diagram is equivalent to reverse engineering a set of source code classes into a class diagram, except that you haven't had to perform any explicit "reverse engineering" step at all. Whereas some modeling tools require you to invoke a specific reverse-engineer option to achieve this, Visual Studio 2005 does not. All classes shown in the Class View are immediately available for representation on class diagrams; and for classes taken from compiled assemblies, the original source code need not even be present.

Members of types are displayed in compartments according to what kind they are. Figure 5-3 shows members grouped as Fields, Properties, and Methods. Alternatively, you can choose to group members by access modifier; or sort them alphabetically, simply by selecting the menu option Class Diagram

You can hide selected members by right-clicking a member and choosing Hide; then right-click the member's compartment heading and choose Show all Members to see it again. You can also collapse and expand entire compartments, such as all fields or all methods, or all public members or all private members, depending on what is on view. Choosing to hide members, or to collapse compartments, has no effect on the underlying code whatsoever, so these operations are fully reversible.

As you work with visualizing members, you will notice that the set of compartments varies according to the language of the underlying code.

Historically, UML notation does not provide separate compartments for some kinds of members such as properties, so UML tools such as Visio for Enterprise Architects and Rational XDE indicate properties as stereotyped attributes, or as pairs of get/set methods. This demonstrates one of the benefits of Class Designer's domain-specific notation over a generic design notation such as UML.

On some of the class diagrams in this chapter, such as Figure 5-3, member names are shown but member types are not. On other figures, such as Figure 5-4, the type of each member is shown along with its name. In Figure 5-2, method members are shown with their full signatures. You can toggle these display settings by selecting Class Diagram

If you choose to save space on diagrams by showing only member names, you can still see the complete type and signature information for a member by hovering over a member to see that additional information as a tooltip.